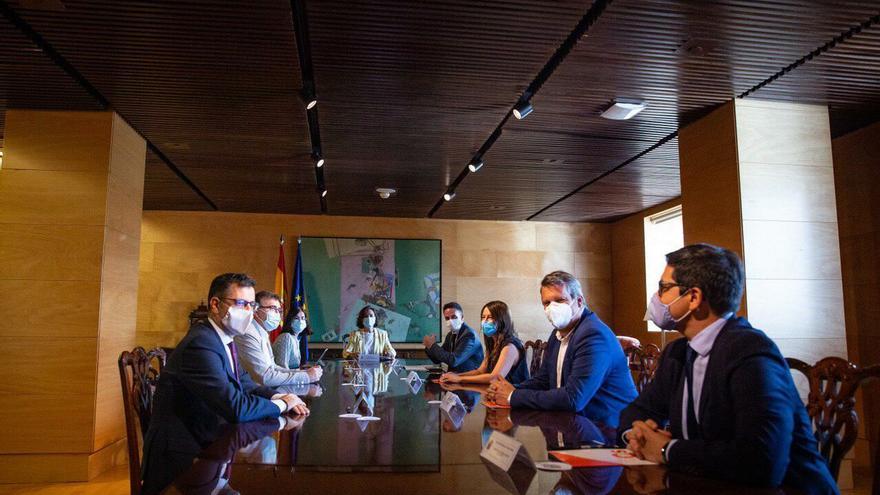 The deputy spokesman for Ciudadanos, Edmundo Bal, assured this Monday at a press conference, after finishing the meeting that they held in Congress with a government delegation led by the first vice president, Carmen Calvo, to address the situation of the outbreaks of Covid-19 and review their agreements, that “there has been no veto, none” to Podemos, as the Minister of Equality, Irene Montero, assured yesterday on Twitter.

“Citizens is not in that, with which it is falling, you cannot be thinking of vetoes or who occupy the chairs,” Bal riveted. As he explained, “the same people, the same government representatives” who attended the previous meeting with Citizens and who “have competences in the matter” have been sitting at the table with the Government. At the previous meeting held in Moncloa, there were no Minister of Podemos from the Executive, and there was, in addition to Calvo, the head of Territorial Policy and Public Function, Carolina Darias.

“When you sit down in a meeting with the government, you meet with the entire government, regardless of who the interlocutors are,” Bal emphasized, agreeing on this with the statements made by Carmen Calvo at the end of the meeting.

The deputy spokesman for Ciudadanos spoke later in Question Time and stated that “there can be no vetoes when it comes to putting solutions and saving lives.” “Podemos becomes very nervous when it appears on the table of the Ciudadanos table because we are a party that wants to turn this country into a new and more modern Spain. We can and nationalists get nervous with our focused and moderate solutions. We will be doing well if both Mr. Iglesias and Mr. Rufián are angry, “he added.

Bal, who was accompanied by the party’s first vice-secretary, Carlos Cuadrado, and his second, José Maria Espejo-Saavedra, left the meeting happy despite the fact that it was very brief, just over an hour: ” It has been a satisfactory, productive and fruitful meeting, he said to summon the Government to contact them this August. “We have told them in advance that we want to continue maintaining fluid contacts and we have suggested that they call us this August because we continue working, we are not going on vacation and we are going to have the phones on.” The spokesman for Ciudadanos has assured that at the meeting he has not addressed the negotiation of the PGE but has reiterated that his party “will rise to the occasion” and will not disdain sitting down to speak.

Bal has bragged about the role his training is playing during the pandemic. “Citizens again demonstrate their usefulness and that we are a party that knows how to respond to the Spanish when we are in an exceptional and extremely serious situation like the current one.” “It should not be strange or surprising that we meet with the government, we are a state party and those are the tables at which citizens demand that we be,” he settled.

Regarding the results of this new meeting, there have been no new commitments and both parties have limited themselves to reviewing the measures already applied, but Ciudadnos has insisted on the need for Sánchezz to take charge of the serious situation in Catalonia before ” the disastrous management “of Quim Torra before the outbreaks.

The Arrimadas party has asked the Executive to allocate an extraordinary economic item in the budgets to create “a strategic reserve of sanitary material” to be “prepared” in the autumn if the cases of Covid-19 increase. They have also transferred to Calvo “the” concern “that Citizens have about the tourism sector-” The Government must clearly tell the other countries what the situation is in Spain because they do not know well what is happening in our country. country, “asked Bal.