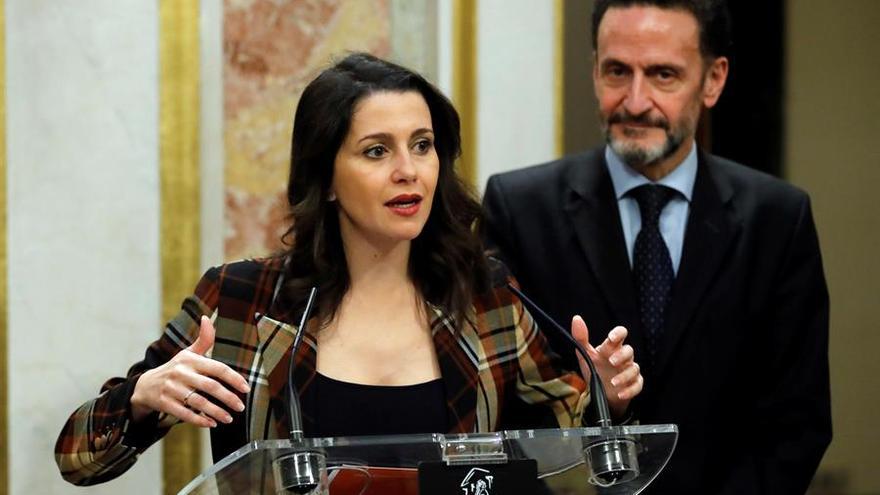 Although both Inés Arrimadas and Edmundo Bal have repeatedly warned the Government that they are not their “new allies”, the formation that is defined as “center” and “liberal” behaves as if it were de facto. Since the pandemic began, the turn taken by the new party leader has been reflected in numerous agreements and pacts with the Pedro Sánchez Executive, after which the deputy spokesman for Ciudadanos has turned in recent weeks to stand out in Social networks have achieved everything thanks to the “initiatives” of their group, despite the fact that since the November 10 general elections, they have only ten deputies in Congress. Those “achievements” achieved have been aired both in the official Twitter accounts and in their press summaries: “The Government accepts”, “thanks to Ciudadanos”, or “as Ciudadanos had proposed.” Now the formation of Arrimadas is preparing to negotiate the General State Budgets, despite their animosity towards United We Can.

The party leaders do not hide that what they are trying with this new strategy is to “neutralize” precisely the investiture partners who brought Sánchez to La Moncloa so that the president does not have to depend on their votes, especially from “the independence activists” of ERC and the “populists” of Pablo Iglesias. In fact, this Saturday Bal did not hesitate to reveal to the mayors of his party, with whom he met electronically to celebrate the first year of government, that the willingness of Citizens to negotiate the Budgets clearly seeks to “separate” Churches from them. , Rufián and Otegui “, so that it is Ciudadanos who” gives solutions to the Spanish “. To that covenant and negotiating eagerness, which includes acting as “mediators” to try to attract the agreement to the PP, a party with which they share governments, in Ciudadanos they call it “useful politics”.

To scare away the image of that sudden communion with the same PSOE government and Unidas Podemos, which until very recently reviled, both Arrimadas and Bal have insisted in all their interventions that they are not the “new allies” or the new “partners” of Sanchez. . “Our votes are not in favor of the Government, they are in favor of Spain and the Spanish,” they have said.

However, the reality that is felt from the outside – and even internally, from a sector of the training itself – is another. So much so that it has caused some of the former heavyweights who started their career with Albert Rivera unsubscribe from the game Outraged by the pacts closed with Sánchez, as has been the case of Juan Carlos Girauta and Marcos de Quinto.

In addition to supporting all the alarm and “return to normality” decrees, those of Arrimadas have negotiated and agreed with the PSOE on the Reconstruction Commission three of the four working documents, the Health, the Economy and that of the European Union, aimed at finding solutions for the recovery of Spain after COVID-19. After ensuring that their amendments were to be included, they voted in favor of those three opinions. The only stumbling block was found in the Social Policy by the reluctance of socialists and United We can include the concerted in aid to schools.

In the plenary session of Congress in which the conclusions were debated and voted, Edmundo Bal – turned into Arrimadas’ right arm, who is still on maternity leave – did not tire of highlighting the “decisive” role that in his opinion had been played by Citizens so that the negotiations “between parties of different ideologies” came to fruition. “While they fight, we make useful politics for the good of the Spanish.” “Less tension and more reconstruction agreements”, the leaders of Ciudadanos have boasted, alluding to Vox but also to the PP, while in Madrid, where they govern with the conservatives thanks to the support of the extreme right, the disagreements with those of Isabel Díaz Ayuso are visible and constant.

Another of the fronts in which Ciudadanos have supported Sánchez with unusual enthusiasm has been in Europe, both in the unsuccessful attempt so that the third vice president and minister of Economic Affairs, Nadia Calviño, could become the new leader of the Eurogroup, as faced with the arduous task for the Prime Minister to reach a good agreement in Brussels on the distribution of funds to alleviate the effects of the pandemic. While from the PP campaigning against Sánchez, the leaders of Ciudadanos stressed the unity of judgment between the “liberal and social democratic families” and expressed their “joy” for the agreement that represents for Spain close to 140,000 million euros, of which some 72.7 billion will be in transfers and the rest in loans, despite the fact that in practice they represent almost 5 billion less in non-refundable subsidies compared to the proposal of the European Commission.

“Europe has given us a great opportunity. We need to reach state agreements to invest those funds in helping families and undertake pending reforms: Modernize employment; Strengthen health; Reform education and Innovation and digitization,” he hastened to secure Bal.

The next scenario will be the General State Budgets (PGE) that Citizens have also opened to negotiate with the Government, always under the condition that they are “moderate and focused” and “comply with the demands that Europe imposes on Spain ” “If Sánchez does it, he will have us on his side as a state party,” Bal said in an interview on the program this Friday. The RNE Mornings.

The number two of Arrimadas again pointed out, again on Twitter, another of what they call “orange lines”: that Sánchez does not grant “privileges to the nationalists -in reference to the dialogue table and the prisoners of procès- and move away from “extreme ideologies”, from “sectarianisms” and “dogmatisms” to “responsibly invest Europe’s money in Education, Health, Innovation and in adapting employment to the 21st century”.

Thanks to this strategy, which at the same time aims to expose the PP as the main opposition party, the formation of Arrimadas has achieved another of its objectives: to open fissures between the president and the Basque nationalists and the ERC who have already warned them of that “they have to choose” between “throwing themselves into the arms of Citizens” or “” maintaining the majority of the investiture. “Both groups have been reminding the Prime Minister that he does not have an absolute majority and that it will be very difficult for him to carry out the new you count for 2021 if you seek agreement with parties that want to “end” them.

Meanwhile, at Unidas Podemos they no longer disdain the consensus with the former party of Albert Rivera. But not at any price. “It is not so much a question of political actors, but of content. The important thing is that we find among all the measures that are good for the whole of our country and that have a broad consensus, and if we are able to do that, all the actors that join are welcome in the same way that we had no problem in thank the vote in favor of Citizens in the latest extension of the state of alarm, “said in one of his appearances in Congress the spokesman, Pablo Echenique.

For his part, Sánchez, increasingly in need of support, defends the policy of “transversal pacts” while balancing to please each other. “We have to be aware that the slowdown in economic activity is unprecedented and that the COVID crisis will bring another social and economic crisis that forces the country to start. In that sense, we all have to side with us. Unity saves lives and jobs, “he affirmed in one of his appearances in which he stressed that if there is a moment in the country that justifies everyone doing” their part “, it is precisely this.

Albert Rivera, a “pardillo” who now tries to subdue the newspaper library with a book

VIDEO | The general director of Public Health of Madrid, on why to close the parks: "They facilitate groupings"