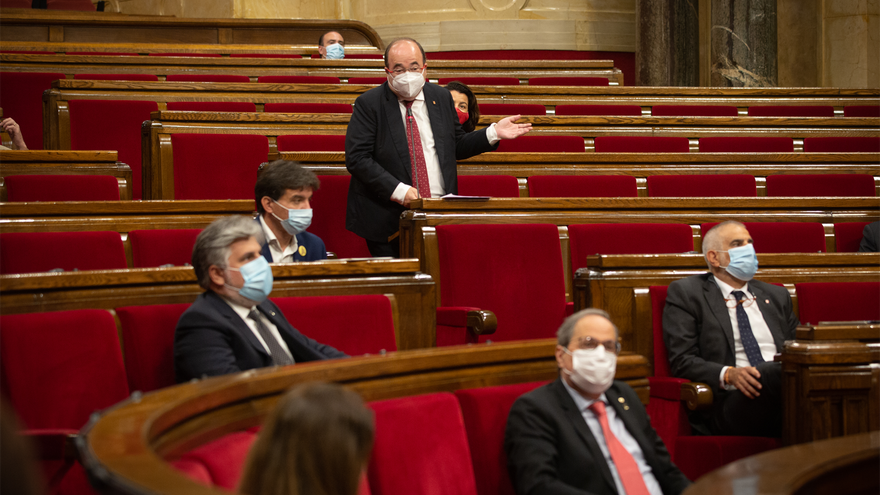 The opposition headed by Ciudadanos and the PSC has demanded this Tuesday the president of the Parliament, Roger Torrent, to activate and start looking for possible candidates for the investiture to replace Quim Torra, once he has been disqualified as president. Both groups consider that the ideal thing to start the electoral clock is for there to be an alternative candidate who can stand for the inauguration, whether or not they have the necessary support, in order to comply with the precepts of the House regulations and begin the countdown to the election. dissolution of the Parliament and the new elections. At the moment, however, it has not transpired that any deputy is willing to appear.

Ciudadanos and the PSC also maintain some discrepancies about the powers that Torrent may have. While from the orange group they consider that the president should make an effort to find an alternative candidate, without going any further, the Socialists agree with the parliamentary lawyers that Torrent, if he does not find candidates after a first period of 10 days, could address the deputies and verify that there is no possibility of holding a plenary session. This would be, according to the lawyers and the PSC agrees, an “equivalent act”, which could start the two-month countdown.

On the part of the PSC they do not hide that their priority objective is that there be elections “the sooner the better”. This was expressed this Tuesday by Miquel Iceta, who also sent a letter to Torrent encouraging him to be proactive and reminding him of his duties at this time. As explained by the leader of the Catalan Socialists, his party could even be willing to support the investiture of an “instrumental” candidate with the sole objective of calling elections. This formula would make it possible to avoid spending two months of interim employment which, according to Iceta, “benefits no one”. The PSC would be willing for this instrumental president to be an independentista, the first secretary has said, always stressing that he had the sole purpose of the electoral call.

From Ciudadanos they show less rush for the holding of the elections. As deputy David Mejía has expressed, the will of the largest group in Parliament is to coordinate with the rest of the non-independence formations to decide the steps to follow, either through an instrumental candidate or with other formulas. Mejía has assured that from Ciudadanos they will try to avoid at all costs that the independence movement blocks the Parliament, although he has preferred not to advance if from his group a candidate for the investiture can come out to start the clock.

The formation led by Carlos Carrizosa does not agree with the report of the lawyers, which ensures that Torrent can make an “equivalent act” to the convocation of a plenary session, and insist that the president must look for a candidate and propose it. In addition, like the PSC, they consider that if there is a deputy willing to appear for the investiture, Torrent has no margin to deny it, whether or not he has the necessary support a priori to reach the majority.

The lawyers of the Chamber have left open a path that would avoid the blockade if none of the members of the Parliament wanted to take the step of presenting themselves, adapting a resolution of the Council of State in 2003 for the Community of Madrid for the current Catalan situation. According to the legal report presented, Torrent could activate the electoral clock on his own and in the absence of candidates for the investiture after 10 days. For this, it could convene a plenary session or, directly, communicate that there is no deputy running for the presidency. From there there would be two months of margin for the groups and, if an effective investiture was not reached, the Parliament would automatically dissolve.