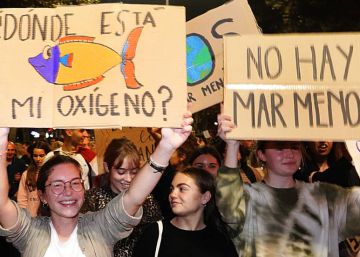 The Murcia Regional Assembly has validated this Friday the decree Law of Integral Protection del Mar Menor that the Murcia Government, formed by PP and Citizens, approved on December 26. Both matches, along with Vox, have voted in favor of the text, which means that it will enter into force as presented by the Governing Council. But its content is not definitive: Parliament itself can modify it, because it will be processed as a bill, as requested by the PSOE and Podemos, since the orange party has added its votes to that proposal. The decree law seeks to regulate the socioeconomic uses that coexist in the Mar Menor to reduce both agricultural and urban pressures that have led to the lagoon to collapse.

For the Parliamentary spokesman of Citizens, Juan José Molina, validate the decree of the PP and ask at the same time its conversion into a bill are not contradictory positions. The text approved by the Government, of which his party is a part, is “ambitious,” “restrictive,” “good,” and “powerful,” but it is also “improvable.” The process in the Regional Assembly will allow political parties to submit amendments that modify the text. The PSOE had already announced its intention to request that the fertilizer use exclusion range be extended, established by the decree approved 500 meters from the coast line, something that the vice president of the regional government, Isabel Franco, of Citizens, says that his party is also studying. This measure raised criticism from several sectors that consider it useless due to the few crops that exist in that perimeter. The Segura Hydrographic Confederation (CHS) estimates that there are only 136 hectares of irrigated land out of a total of 60,000 in the basin.

While in Cartagena, where the Parliament is located, the convalidation or not of the decree was still debated, in Murcia Franco denied at a press conference a “crisis” within the Executive. When on December 26 the orange councilors approved the decree, they did so by “loyalty” to their PP partners and now ask that it become law also for loyalty, but with society, because the debate of the norm can only “enrich it,” he said.

The president of the autonomous community, Fernando López Miras, of the PP, has not ruled on this issue after Citizens announced that he would support the position of the PSOE this Thursday night. Hours earlier he had simply reminded his partners that the decree also bears his signature. This Friday, his participation in a public event he planned to attend in Murcia was canceled.

In the Regional Assembly, the spokesman of the popular, Joaquín Segado, repeated to his partners that they themselves participated in the elaboration of the decree and accused them of “having fallen into the trap” laid by the PSOE, because the parliamentary process to take out A bill goes on for months. In fact, it will not begin until February, when there will be a session again, since the month of January is non-working in the Chamber (the decree has not been validated by the plenary, but by the Permanent Delegation, composed of 19 of the 45 deputies). Once the session begins again, the parliamentary process includes a plenary session to discuss possible amendments to the whole and, if they do not succeed, the creation of a commission in which the articles of the law and the Groups may submit amendments. At the end of that commission, which can last for weeks, its members prepare a report that goes back to the plenary, where they can discuss again the amendments that had not been approved before. The final step is the vote of the law, also in plenary.

Vox parliamentary spokesman Juan José Liarte, who has voted with the PP against converting the decree into law, has not lost the opportunity to highlight the disagreements among the members of the Executive: “Never has a government opposed itself same, ”he said, ensuring that he is“ amazed ”by the“ defection ”of Citizens, who asked him to force the vice president to resign.