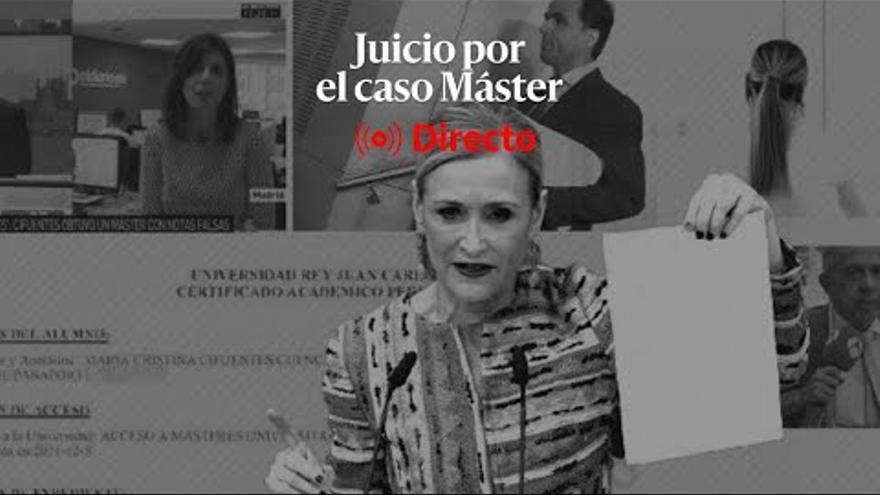 The former president of the Community of Madrid has appeared this Friday before the court that judges her as injured by a maneuver perpetrated by the Rey Juan Carlos University, from which she obtained a master’s degree in public security that she apparently never studied. Cifuentes has assured that he received the falsified certificate of his defense of the Final Master’s Thesis (TFM) without having requested that document because he did not even know that there was one of his own to certify that academic act. During some two hours of statement, Cifuentes has also said that he did not ask any of his collaborators or anyone from King Juan Carlos to falsify the minutes. “Never, ever, to anyone,” he said.

The accused has said that when she received the certificate of the TFM from the University, she gave her a “guarantee” because it came from the Rector’s Secretariat. In fact, she showed it as evidence in a video that she published on her social networks and in which she declared herself a victim “of the” manipulation and lies “of this newspaper. That video was later deleted by her and had to be exhibited in the trial with the brand of elDiario.es. “To those who want me to leave, I am not leaving,” the then president of the Community of Madrid intoned with the falsified certificate in hand.

To questions from the prosecutor, Cifuentes has acknowledged that after revealing elDiario.es that he had obtained his postgraduate degree with falsified notes, he asked his collaborators to speak with the university and collect “as soon as possible the supporting documents that he had completed that master’s degree” . Specifically, he has affirmed that he claimed a copy of the title, the payment of the tuition and an academic certification where the twelve subjects and the defense of the TFM were recorded, but never the minutes because it was a document of which he had no proof of its existence.

That document is the one that sustains the accusation for documentary falsification for which it faces a request of three years and three months by the Prosecutor’s Office that the private accusation, exercised by the Rey Juan Carlos University, raises to four. The Prosecutor’s Office considers it inducing its falsification to justify “a defense of TFM that never occurred.” It was necessary to “avoid the dire political consequences,” says the representative of the Public Ministry. During his interrogation, Cifuentes has denied such pressure. He has insisted that on the aforementioned March 21, 2018 he did not speak with “anyone” at the University about his master’s degree documents. “Not to mention, I did not even speak with the Minister of Education,” said Cifuentes, who explained that that day he had a “missed call” from the rector that he saw later and that he decided not to answer “so that no one could say that I had intervened or mediated anyone ”.

Cifuentes has acknowledged that he studied the master’s degree without knowing a single professor and has affirmed that he only dispatched by telephone with the late Enrique Álvarez Conde, the professor who directed the Institute of Public Law that offered his postgraduate degree and the epicenter of the plot. And that it was he who told her that she could pass the master’s degree without going to class or taking exams, only by handing in work that she sent him “on paper” through people from her team or her sister, who is a URJC official .

Regarding those works, he has affirmed that he did not keep a copy of any of them. Neither did the TFM, which has maintained that it presented on July 2, 2012. However, it has explained that it simply exposed the “general lines to two or three people” who did not know if they were the ones who were going to evaluate it or if they were “a court” . “It was an informal act in an office, not in a classroom. I suppose that those people would transfer it to whoever corresponds to evaluate it. “” When, how and who make up the tribunal corresponds to the University, not to me, “says Cifuentes, again pointing out the URJC as responsible for any irregularity.

The defendant has disassociated herself from María Teresa Feito, her government advisor who contacted the teacher who forged the minutes on March 21st on twenty occasions. Cifuentes has assured that she did not know Feito before she became an advisor to the Minister of Education Rafael Van Grieken. Feito is an English teacher at Rey Juan Carlos and accompanied Cifuentes to collect his degree. That day they were attended by Amalia Calonge, a civil servant friend of Cifuentes’s sister, who also works at the university, and who changed the notes of the former Madrid president on the internal server of the university. Cifuentes has assured Calonge that he knows her “three or four times” and that one or two of them respond to visits to the funeral home coinciding with the death of the father and another sister of the former president.