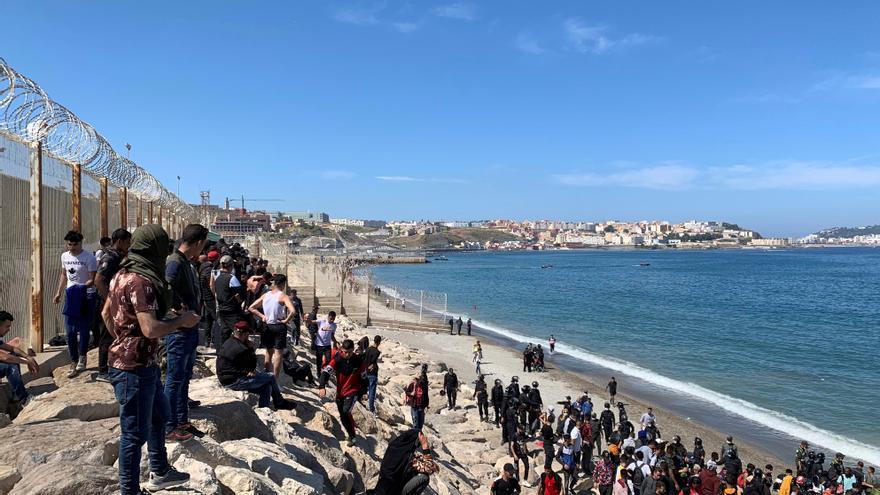 First hours of the crisis

From the early hours of the morning of last Monday, thousands of migrants arrived at the fence that separates Ceuta Y Morocco, one of the hot spots on the Spanish border. In the absence of coastal surveillance by the Alawite kingdom, immigrants began to enter Spain by swimming or skirting the two border breakwaters with Morocco on foot. The vast majority were young males –quite a few of them minor– who wait their turn at the fence to cross into Ceuta territory. At the end of the day, the Government Delegation estimated 3,000 people who had already managed to enter Ceuta.

The night from Monday to Tuesday

Early last Monday night, with the National Police and the Civil Guard Overcome by the incessant arrival of migrants to the fence, the Ministry of the Interior reinforced the presence of the State Security Corps and Forces with 50 members of the Civil Guard and 150 more national police, including anti-riot agents from the Police Intervention Units. He also put on alert the Security Reserve Group 2 of the Civil Guard, with headquarters in Seville and one of the most numerous in the Corps.

During the night, hundreds of the immigrants who managed to cross the fence staged numerous altercations with the neighbors and among them that required the intervention of the police. The order received by the agents was to regroup all those who chose parks and gardens to rest, with the aim of taking them to the border to proceed to their return to Morocco.

Arrival of the Army

Before the sun rose this Tuesday and due to the presence of thousands of immigrants crowding into Moroccan territory, the Government has deployed several hundred military personnel at different points along the border. Soldiers of the Third Duke of Alba of the Legion and from Regulars Group 54 have concentrated on the beach with Uro Vantac semi-armored vehicles Y BMR of troop transport, in front of the breakwaters of Tarajal and Benzú, where the largest influx of immigrants took place yesterday.

The army is deployed in Ceuta. EFE

During the first hours of this Tuesday, the entry of migrants from Morocco continues. With the images of the border in all the media and with the opposition harshly criticizing the management of the crisis, the Minister of the Interior, Fernando Grande-Marlaska, announces that the Spanish police have already it has returned more than 2,700 people to Morocco. “We will be firm in the face of any challenge, any eventuality and under any circumstance”, sentence after the meeting of the Council of Ministers. By mid-afternoon, according to an Interior source, this figure already rises to 4,000.

At the international level, the Foreign Minister, Arancha González Laya, has announced that he has summoned the Moroccan ambassador to Spain to convey his “displeasure” at the illegal entry of thousands of immigrants to Spain.

Beyond the government’s response, the migration crisis has caused controversy among political parties. United we can, More Country Y You compromise They have demanded the Coalition Executive not to treat migrants as an invasion and to protect their rights. In the block on the right, the approaches have been different. The leader of the PP, Pablo Casado, has called Sánchez in the middle of the morning to demand that he be firm in managing the arrival of migrants. Hours later, the conservative spokeswoman in Congress, Cuca Gamarra, has demanded that “the immediate return of all those irregular immigrants who have arrived”.

The most radical party has been Vox. Throughout the day, Santiago Abascal has decided to travel to Ceuta, where he will appear before the press this Wednesday. The ultra spokesman in the lower house, Iván Espinosa de los Monteros, has assured that “Spain is being attacked” and that it is a “real invasion” and a “violation” of the border of that autonomous city with Morocco. As he explained, the arrival of the migrants is due to a “long process of infinite transfers” to Morocco.