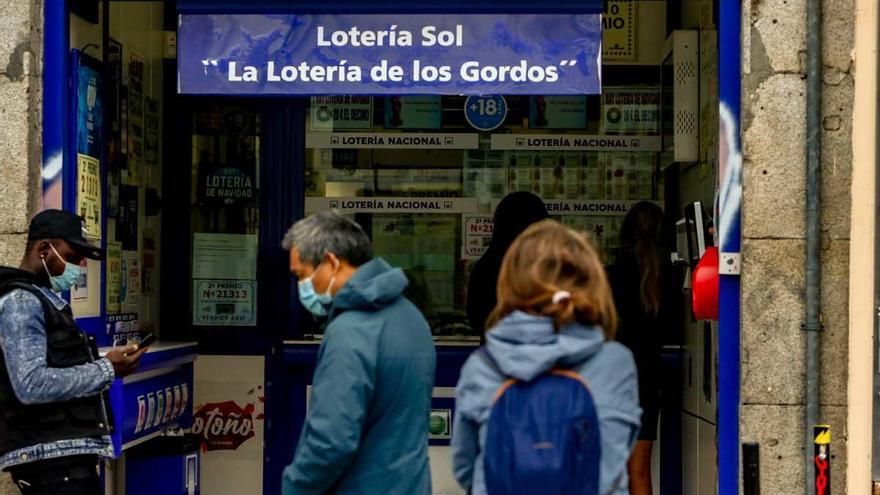 The illusion for el Gordo de la Christmas lottery This 2020 is played more in the distance due to the pandemic: internet sales have largely ‘saved’ the window, but in the run-up to the Extraordinary Giveaway, the Queues at Doña Mañolita, with a mask and security measures, they could not miss.

The queues for buy the lucky tenth they began to be seen in November in this administration, which is the first in sales of the Christmas Lottery. This year has been atypical due to the covid and has especially “shaken” the commerce of the city centers.

This is what Bosco Castillejo, spokesman for this administration, tells Efe, who has been contemplating in recent days the atypical line of people, keeping the safety distance, that goes around the administration block.

They have not stopped at the window for a month and a half, but in previous months, with the pandemic, it was difficult to get close to the center of Madrid and sales were focused on the internet.

The purchases of tenths “online” have grown notably, especially in the number of different customers, but despite this this year globally “less is being sold“.

“It sells less, we and all the administrations – argues Castillejo – because from July to September they have been very bad months for all the commerce of the center of Madrid. You came and there was nobody, and four months is a long time”.

The administrations that were prepared for online commerce have been able to compensate for the drop in income at the window, such as this one located on Calle del Carmen, which since last week no longer sells on the internet to ensure that the tenths reach homes, because they send physical ticketsThey do not keep them in custody, as others do.

The famous Manises Lottery, which has distributed the Gordo three times, has also seen online sales grow, with which they began in 2005, and has done so by more than 30 percent, however, at the level of associations and groups they have dropped around 20%, and at the window are maintaining.

For this reason, its manager, Rafael Sanchis, believes that this year they can even grow between 5 or 10%.

“Older people in the end have launched to buy online. Before, maybe they had their fears, and with the pandemic they have tried, they have helped them and they have done it normally, “says Rafa, who like the rest of the administrations has limited the capacity in the administration.

No more than three people can enter. There are six windows but only half are open, and today, and more this last weekend before the draw, there are lines of up to two hours to buy a ticket.

And it is that this administration, one of the most important in Spain, has been distributing eleven consecutive years great Christmas prizes, and in the last eight the Fat one on three occasions. But it is that, in itself, the town of Manises is the municipality that has distributed the Gordo the most times, five.

“Of course the more you sell, the more chance you have of distribute prizes, -he says- but I trust the luck. It exists and we are on a roll and we hope it lasts for many more years. ”

A smaller administration and one of the oldest in Madrid, on Calle Barquillo, has also experienced a significant increase in the online sale of tickets.

In their case, the increase is being 50%, according to the president of the platform, Lucía Pascual, assures Efe, and that will allow them to stay “more or less like last year or go down a little, no more than 5%” .

The virtual world is allowing them close the Christmas campaign successfully, because this administration has lost a lot at the window.

Pascual is convinced that the administrations that have developed the online service are the ones that will be able to save the campaign and the year.

Those who have implemented the channel “online” this year, given the circumstances, are not coping, according to comments, because “if you do not know the business in this way, you do not have experience, you do not have the ability to size what you need” .