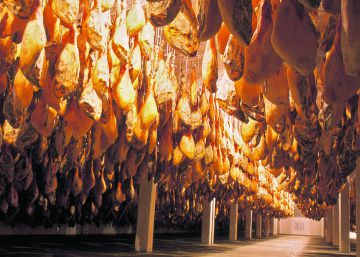 Although the Christmas campaign began in November, the final shot came last weekend, in the heat of the Black Friday For the ham producers, it is the most anticipated time of the year, the high season, since these dates are the ones where more ham, especially Iberian, is consumed. "It is a very important moment, since in many cases it is what will mark the year for many companies, ”says José Gómez, owner and member of the fifth generation of the Salamanca firm Joselito, with 150 years of existence and worldwide recognition. In his case, the sales, he says, have them distributed throughout the year, due to the export, since he sells ham to 56 countries and has as ambassadors chefs such as Ferran Adrià, the Italian Massimiliano Alajmo, the Dutchman Jonnie Boer, the Japanese Seiji Yamamoto, the German Joachim Wissler and the French Yannick Alleno. “This weekend is when you take the true pulse of how the consumption of families will be this year. The prospects are good, although the economic uncertainty shows. Ham is a cultural issue in Spain and it is not lacking at Christmas tables, ”said Gomez, last Saturday in a telephone conversation.

Between 35 and 40% of all turnover comes from the Christmas campaign. This is the opinion of Eva Sánchez, owner and managing director of Fisan, which ensures that acorn ham is the star gift, especially the high-end one. That is why, firms like yours reserve a series of special pieces for the occasion: in this case, they have launched to celebrate the centenary of the brand, founded in Campillo de Salvatierra (Salamanca) 52 units of the 2012 vintage, which present in a leather case and with the necessary accessories to cut the ham.

Because the editions that are dispatched these holidays do not look the same as those sold the rest of the year. “When we started selling ham outside Spain, 30 years ago, we realized that we had to dress it with entity and category, and that the continent had to be prepared carefully. The same happens at Christmas, you have to prepare it carefully, ”warns José Gómez, who presents in a special box a collection of the 2017 vintage for 590 euros.

It is also believed by Bijiana Maksimovic, director of global marketing at Cinco Jotas, a firm present in 45 countries, which expects that 50% of sales will come from the international market in the next decade. "This year we have prepared a special box with the illustrator Carmen García Huerta, chosen by the Taschen publishing house as one of the 100 best in the world, and which has tried to reflect the biodiversity and fragility of the pasture ”, adds the firm's directive, which believes that almost 50% of sales occur at this time of year, which together with the Chinese New Year are two stellar moments, since for this producer, belonging to the Osborne group and based in Jabugo (Huelva), China is its second market, after Spain.

The feeling that this campaign will be good also has the managing director of Carrascos Ibérico, Tanacho Carrasco, who believes that between 30% and 40% of ham sales correspond to the last months of the year, although what he does not have so clear that 2020 is equally fruitful. “If there is an economic crisis, people stop consuming these types of products. Already happened with the previous crisis, in which Christmas gifts were removed and with them the ham. Little by little the market was recovering, but by the way of individuals and because companies focus on selling sliced ​​pieces", remember. And it offers the following data to support the above: in 2012, 60% less animals were slaughtered in Spain than in 2008. “It is a barbarity, as there was also a price drop, but we started to see the light, and above all we had to go outside. We are in 20 countries, ”says Carrasco, who has also prepared a special case for 585 euros.

Manufacturers are on alert for economic uncertainty, and believe that 2020 will be a complicated year

Also optimistic is Rafael Guerrero, commercial director of Covap, the Cooperativa Ganadera del Valle de los Pedroches, based in Pozoblanco (Córdoba), who estimates that 60% of sales come from the last quarter of the year. “Although we have managed to seasonally adjust consumption with fresh sliced, ham is still the most important purchase and is reserved for celebrations, ”he says. That is why the firm has reserved 250 pieces of 2015 to market on these dates, with silk apron included, at a price of 895 euros. "If we want to encourage sales, we cannot present it in any way." And before the coming clouds, included in the international market with the Brexit or tariffs in the US, it is clear: "the consumer in these countries values ​​the high quality of the product."