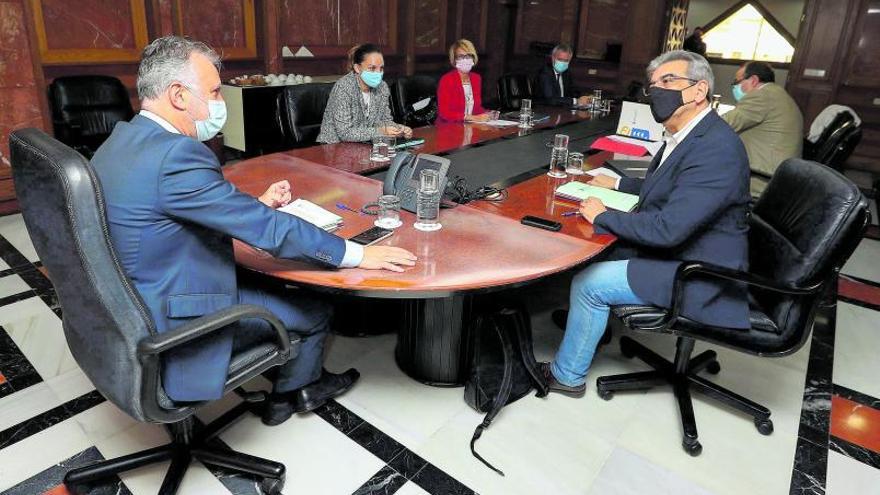 The Governing Council yesterday approved new measures to prevent outbreaks of Covid-19 during the Christmas period. From the day after the publication of the decree law in the official gazette -in principle from tomorrow, since the intention of the Executive is that the decree is published today-, and until January 10, the usual dinners and lunches of this time of year may not exceed six people. But there will be exceptions. Children between zero and six years old do not count and the limitation will not be taken into account in the case of cohabiting families. That is, if seven people live in the home – for example, a couple with three children and two of their grandparents – all seven, of course, will be able to sit at the table. But, in addition, that maximum of six will rise to ten diners on the most familiar days of the holidays: Christmas Eve (24th), Christmas (25th), New Year’s Eve (31st), New Year’s Eve (January 1st) and Kings (6th of January). January).

And the limit of ten diners is not applied on those five main holidays if more than that number of people live in the home. However, the maximum number of diners is not the only thing that canaries should take into account, since the regional government has also decided to restrict freedom of movement for the first time, which is known as a curfew.

The curfew, unlike the limitation of diners at Christmas gatherings, lunches and dinners, will not take effect this Saturday, but on December 23. From that day until January 10, you will not be able to leave your home between one (1.00 am) and six (6.00) in the morning. Except, of course, force majeure, such as transfers for medical reasons – to go to the outpatient clinic or the hospital – or for work, for example. And here too there are exceptions on certain days, although in this case only on two: Christmas Eve –the early morning from 24 to 25– and New Year’s Eve –the early morning from December 31 to January 1–. On those two nights, the curfew will be delayed for half an hour as they are two of the most important days of the Christmas calendar, so freedom of movement will be restricted between 01:30 and 06:00.

Therefore, for the two key days or D-days of the festivities, those of the Christmas Eve and New Year’s Eve dinners, the islanders must be clear about the following basic rules: a maximum of ten diners – not counting children up to six years of age – and at home at one-thirty in the morning at the latest.

It must be pointed out, of course, that the regional government does not rule out approving more restrictive measures in the coming days and weeks if the epidemic situation worsens, especially in Tenerife, which is the island that currently worries “seriously and seriously” to the health authorities of the region, as recognized yesterday by the spokesman for the Executive, Julio Pérez. Moreover, the Minister of Justice also described as “possible” that finally it is necessary to adopt specific measures in Tenerife.

In addition, the Cabinet chaired by Ángel Víctor Torres also approved and renewed measures beyond the home environment. Hospitality businesses – restaurants, terraces, bars … – must be closed tightly at midnight, there may not be more than six people around the same table, a minimum distance of two meters must be respected between each of them and smoking is prohibited. All those outdoor activities that do not promote the maintenance of interpersonal safety distance are also strictly prohibited: “Neither parties, nor fairs, nor festivals,” stressed the Minister of Health, Blas Trujillo. What will happen then with the cavalcades of the Magi and the portals of Bethlehem? Well, they can be done, but in static.

The idea is to minimize the risk inherent in all those activities so common at Christmas time but that at the same time involve the transfer of thousands of people. City councils can organize horseback riding and nativity scenes as long as they adopt the security measures that are required of them and as long as they do not give rise to crowds. Cultural events or even hospitality business events in public spaces may also take place if the premises have the mandatory municipal authorization and in any case respecting the rules. The same in the case of religious acts, in which choirs are prohibited due to the risk of the transmission of the coronavirus by aerosols.

However, the measures to avoid flare-ups at Christmas were not the only issue addressed at the Governing Council table (which lasted two and a half hours longer than expected). Another key issue was that of antigen testing. Neither Torres nor his Tourism Minister, Yaiza Castilla, are willing to give in to the Minister of Health, Salvador Illa, who continues to ignore reasons and maintains the requirement that the only valid test to prove that he is not infected is the PCR , which can cost up to 150 euros and, therefore, can give the finishing touch to the already battered regional tourism sector.

In this sense, the Governing Council agreed to formally require the Ministry of Health to exempt the Autonomous Community from state regulations in relation to PCR. In other words: that once and for all it accepts as valid antigen tests, much cheaper, faster and as effective as PCR, or at least with a level of reliability high enough for Brussels to consider them totally valid . However, and while Illa’s response arrives – to whom the law imposes a specific deadline to do so of no more than fifteen days – the Government will work on a decree to regulate the type of analysis that tourists must submit to, that is, to validate the antigen tests. Moreover, Torres is willing to give the minister a pulse even when he does not agree to exempt the Canary Islands from the mandatory nature of the PCR. Not surprisingly, the opening of the British market seems imminent, and with it also opens the possibility of saving hundreds of companies and thousands of jobs. “Step by step, but we are going to move forward,” said Executive sources at the end of the Council.

On the part of the Canary Islands, there is nothing less than the European Center for Disease Detection and Control, which even goes a step beyond what the regional Executive requests and sees no reasons to impose quarantines or to impose tests of any kind, not even those of antigens .––––

FREE TRIALS FOR THOSE WHO RETURN

from the regional coffers; that is, free. It is about that student who is in Madrid, Barcelona or Bilbao can come to enjoy Christmas with their loved ones without this implying a reduction in the family economy and knowing at all times their state of health to avoid contagions. However, the regional government spokesman, Julio Pérez, recommended yesterday that in the ten days prior to their return to the Archipelago they limit social interaction as much as possible. Students in other countries will also benefit from the measure, such as Erasmus students, although their case could be regulated in the second decree, which will be coordinated with the Balearic Islands and which will establish the control and analysis mechanisms for non-residents who come from the Peninsula. | M.Á.M.