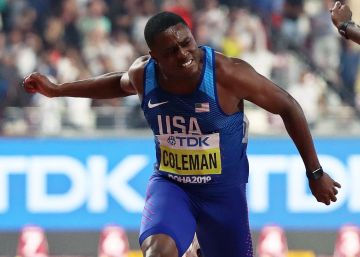 Destiny is irony, and sad, as, despite himself, Usain Bolt discovered more than two hours before the end of the 100m in the World Athletics.

The giant had assumed that from the hot Doha there would be no heir worthy of being called that with character, exuberance, sense of Show, of dancing and laughing out loud, but please, I sighed, if only that, I don't get a bland and ugly Coleman. The giant prayed for Gatlin, which is serious, yes, but at least it is one with a minimum of personality and charisma, and a story, although contradictory, and he was already at the top when he arrived, and the hells that heard him sent him, take it now, to Coleman, something like him antiBolt, the fastest new man in the world with his victory in Doha with a record of 9.76s.

Coleman is, and not only by physical size (it measures something like 1.70m, 27 centimeters less than the Jamaican who 10 years ago left the speed records light years of his followers, 9.58s for 100m, 19 , 19s, for 200m), and launched in the race is like a cannonball, neckless, with a very wide chest, a barrel, and not an elegant and very powerful gazelle, but because of the almost anonymous dumbness with which it crosses at full speed , and that nobody disputes it, the almost atomic speed, the tracks of the whole world. Nor can the brand of victory be discussed to turn around the London final in 2017, which came as a favorite and was overtaken by Gatlin: the 9.76s are the best world brand of the last four years, The sixth of the story. The wind, as nonexistent almost as the public (0.6 m / s in favor). The reaction speed, magnificent, 128 thousandths. Nor Bolt would have won him when his last triumph, in 2015. Justin Gatlin, an eternal fighter, was second, with 9.89s, and third was the reborn Canadian De Grasse, 9.90s, the best mark of his life.

Bolt will have to swallow with Coleman, 23, as well as Sebastian Coe, who will have to look elsewhere for the light that illuminates his federative universe, which has already ceased to be called the unpronounceable acronyms IAAF (International Amateur Athletics Federation) to be called from now World Athletics. And Coleman will be his faint and disturbing beacon, although in the presentation of the final, before 5,000 people in a stadium with capacity for 40,000, all kinds of luminous-visual attractions were used to magnetize attention. And when, wrapped in its flag, the Georgian, from Atlanta, Coleman, was still celebrating his victory, the stadium was already empty and silent.

The semifinals marked the high of an exhibitionist Coleman who scored a 9.88s after getting over at the start and relaxing at the end, Gatlin's downturn, which ran badly (10.09s) and went through times and sweating, and gave In light of a multinational and multigenerational final, and matched except for one of its ends, the main one, Coleman's.

The story of nationalities in Liza is like the beginning of an endless joke. There were two Americans, the two poles of the race, Gatlin-Coleman, two Canadians, De Grasse (old at 24) and Brown (27); a 26-year-old South African, Akani Simbine; a 24-year-old Briton, Zharnel Hughes, a symbolic Jamaican, Yohan Blake (29 years old) and there was even an Italian, the phenomenal Filippo Tortu, the 21-year-old who 14 months ago in Madrid achieved what no Italian before, not even his Idolized ancestor Pietro Mennea had managed to get off the 10s in the 100m (9.99s). And the Italian, so tender and so hard, he wasn't even last. It was seventh.

Of all of them, only Coleman had ever moved through the turbulent and select terrain through which those who have gone down from 9.80s, the mark of distinction and shame, to which he returned in Doha. Everyone who has ever done so, except for the untouchable Bolt, and not many more, seven, have had doping problems. Some, like Coleman, with three problems of location, have been saved by the hairs and lawyers of a sanction; to others, and not to Gatlin, who returned, was buried, like Tyson Gay, the American who once dreamed of beating Bolt and approached until 9.69s.

Even silent, almost mute, and moving below the radar, without making noise, Coleman has also demonstrated the character that is demanded of a champion, and not so much by his looks of hard intimidation, that some blame his shyness, as his speak in inaudible whispers, but because of the way in which he overcame the pressure of the USADA's public accusation, the American anti-doping agency, which he defeated as he defeated several generations of sprinter despite not having disputed, before arriving to Doha, a race since the end of July won, with 9.99s, the United States championship.

A month earlier he had run 100m at Palo Alto in 9.81s, the best world brand of the year, a time that allowed him to predict a further decline below 9.8s a year after the first time. He succeeded, and took a World Cup, and a throne that hesitates since the withdrawal of Usain Bolt.