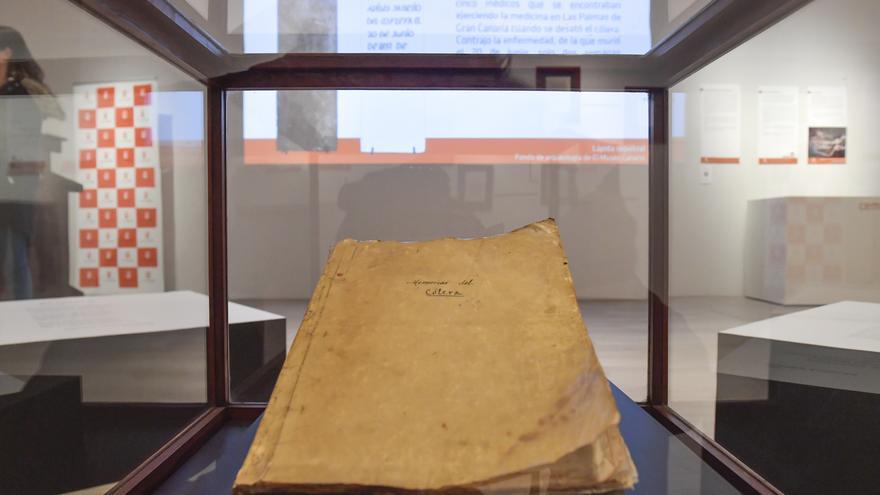 Notice of June 5, 1851: The Health Board of the district of Las Palmas de Gran Canaria officially declares the cholera epidemic on the island. Stop. March 14, 2020 announcement: The Government of Spain decrees the state of alarm as a result of the expansion of the Covid-19 coronavirus. Two dates and two centuries that confronted the Canarian population with very high death rates and some harsh mobility restrictions where ignorance and fear took their toll. Traveling to the past, but with an invitation to parallelisms, the new temporary exhibition opens to the public Memories of cholera. Story of an epidemic from The Canary Museum.

In the center of the room rests a yellowish parchment whose title reads Memories of Cholera. It is one of the central pieces of the exhibition, which traces in 55 documents the hardships, successes and uneasiness of the alert that have been examined during the investigation Bodies, objects and spaces. Convergent deaths, divergent deaths. The responsible, Teresa Delgado and Fernando Betancor, curator and archivist of the entity, contextualize the archaeological findings of the 19th century thanks to the enormous archival heritage that houses the Scientific Society.

Apart from advances in public health, the measures applied at the beginning of the epidemic were inherited from the hygienist medicine of the 18th century and are still effective today: «The solitary confinement, the quarantine and the sanitary cordons, in addition to the limitation of mobility so as not to spread the disease from one municipality to another, were applied from June of that year.; In addition, use was made of safe-conduct issued by the competent authority, so the tools applied now have been practically the same as then," Betancor points out.

The boats ran out of rudders at the same time that the alert went through the Archipelago to enforce the isolation of Gran Canaria. The people registered at that time 58,943 people, of whom 5,593 died from the infection, that is, 9.5% of the total, while 20% accumulated in the capital, relate the sheets that are shown in the showcases. Six months to sow chaos.

The show delves into the social, economic and, above all, political consequences, which resulted from those events. With a population prey to famines caused by droughts and overcrowded as a result of the growth of the city, the general state of health was critical before cholera. For this reason, the bacterium Vibrio cholerae, whose transmission occurs through the consumption of contaminated water or food, decimated the inhabitants so quickly since «the waters circulated through open-air pipes and were contaminated both by the washing of dirty clothes and by the fecal discharges that were in them», explains Teresa Delgado. The countrymen, terrified, tried to flee and escape from the maritime city, unaware of the spread of the pathogen, forcing the municipalities to prohibit free transit.

Although the last case was recorded in Valsequillo on September 18, Gran Canaria would remain inaccessible until December 3, 1851, a fact that deepened the differences established between the capital islands. society suffered a huge economic depression», emphasizes the conservative, so the resurgence of the insular lawsuit was inevitable. "As of August 1851, the confrontation between Gran Canaria and Tenerife was evident from a political letter Antonio Lopez Boots when he criticized the lack of help and the disproportionate communication measures that had been imposed”, comments Betancor. The aftershocks were not long in coming and Tenerife accused the neighboring rulers of not giving sufficient notice of the catastrophe, one more reason that would lead to the division of the provinces.

The story “helps to understand the current situation much better”

Without supplies, citizens lived isolated and without prospects. However, this was not the first time that an epidemic devastated the villagers. On the contrary, the plague, smallpox or yellow fever previously ravaged the Canary Islands, as indicated by the doctor Conrado Rodríguez-Maffiotte in island episodes. Since the conquerors spread new diseases to the aborigines, maritime traffic had been the main vector of contagion of different ailments that the peripheral geography had kept away.

The outbreak of cholera was also visible in the landscape. Suddenly, the crosses appeared outside the walls. "Funeral practices have strict and normalized principles in societies, so graves from the historical period, which are not aboriginal, outside ecclesiastical or civil cemeteries reflect specific circumstances of the moment," highlights the expert Teresa Delgado. At the beginning of the 21st century, different public works discovered both in The Bachicao Cross, in Tenoya, as in Los Hoyos, buried mortal remains of men and women linked to the episodes of 1851 through their personal objects and the chronicles of the press that narrated those misfortunes.

The exhibition, open until February 28 at regular hours, used to rebuild an epidemic story that “helps to understand the current situation much better”, argues Fernando Betancor. The insular memory drinks from the past to face its future with audacity and prudence.