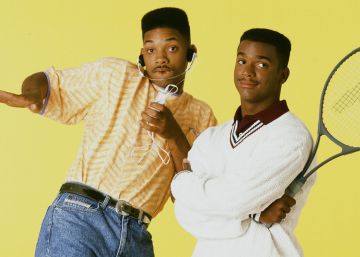 A generation of Spaniards born in the late seventies premiered their adolescence at the same time that Spain premiered a new television concept: private networks. Thanks to them they contacted programs like The Simpson or The prince of Bel Air, which were broadcast in loop at lunchtime in Antena 3. Produced by King Midas of black pop Quincy Jones, the second was the story of a boy who moved to live with his rich uncles in an exclusive neighborhood of Los Angeles , and turned rapper Will Smith, The Fresh Prince, in a world star and over the years in one of the highest paid actors in Hollywood.

Like all series at the time, the only option was to see them dubbed. Will Smith had the voice of Iván Muelas, a leading actor who recited in Spanish the catchy song from the head of the series. The translation of the rhymes was by imaginative necessity: "To the west in Philadelphia, I grew up and lived / Without paying much attention to the police / I played basketball without getting too tired / Because in the evenings I graduated."

Those same boys of the seventies are now opening the maturity (that is to say) at the same time that they release another television concept: the consumption on demand with its original subtitled version. Film magazine So film recently celebrated that Netflix replenished The prince of Bel Air respecting the dubbing in Spanish. "A genius" that adapted local references to those of a story that took place on the West Coast of the United States. And that's how hip hop culture met Julio Iglesias, Chiquito or El Betis, manquepierda.