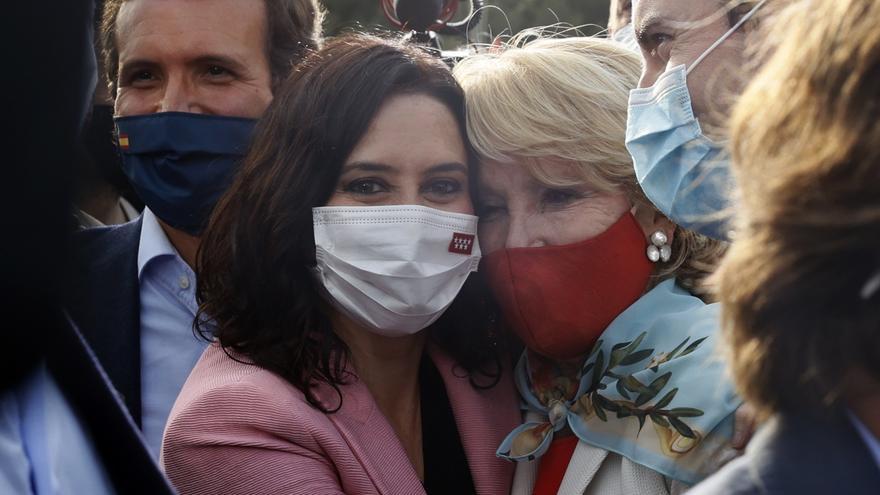 You can think what you want about Esperanza Aguirre, but the lady gives a show. She does not need arguments or messages from the national leadership of her party. When he wants to be noticed, he grabs the hand grenade, drops the ring, and throws it on the stage. There was a time when he made an innocent face while others felt his body to see if all his limbs were preserved. What in Manel Fontdevila’s cartoon 2009, she was still pristine in the middle of a sea of ​​mud. Later, his luck ran out when his two closest collaborators – Ignacio González and Francisco Granados – ended up in prison. From then on, every time he opens his mouth, at the Genoa headquarters they have to increase the usual dose of antidepressants. He is no longer engaged in politics, but in demolition with explosives.

Encouraged almost certainly by Isabel Díaz Ayuso and Miguel Ángel Rodríguez, or at least with their approval, Aguirre gave an interview to El Mundo to announce that the Madrid president must also preside over the Popular Party in Madrid, which is precisely what Genoa wants to prevent. Given that Aguirre is what he is, he could not limit himself to praising Díaz Ayuso, but the character he has created after so many years claimed him to despise those who do not think the same in his party, because among all they do not make a single brain.

He treated the mayor José Luis Martínez-Almeida, whom Genoa promoted as a possible candidate against Ayuso, as a useful fool: “What he says is that those from Genoa are pushing him.” That is, they are using it so that the president of Madrid does not concentrate all power. As Aguirre describes it, it does not seem that he has many lights, taking into account that Genoa is not the only one that bosses him around. “In the Almeida sector there are some kids headed by a boy whose name I don’t want to remember,” Aguirre said, perhaps referring to Ángel Carromero. If Almeida is swayed by an advisor like Carromero, it is best to tighten the seat belt or pull the car. In political terms, of course.

But if it were only Almeida who was crucified, the PP could consider Aguirre’s reckoning as part of the work and suffering that accompanies us in this life. The bad thing is that it also goes against Pablo Casado and his team. From the outset, he affirms that Díaz Ayuso is “the person who has done the most political damage to Pedro Sánchez and Pablo Iglesias.” Therefore, he is not Casado, which should already sound somewhat offensive within the PP.

He goes even further in his contempt: “I think that in the PP there is no one over 55 who is dedicated to thinking. And thinking is very important and in that the PSOE wins us.” From there two things must be deduced. Aguirre, 69, believes that Genoa is run by rookies who do not measure up and that if there are any older ones they do not have a brain to show off.

Genoa reacted with a press conference by Teodoro García Egea –age: 36 years old–, which is a bit like sending a Ford Fiesta to a Formula 1 race. to any journalist and gave way to questions. The first was about Aguirre’s interview and the crisis of the Madrid PP. He did not answer it. The second, about the same. He started talking about Sánchez and the Mar Menor. At the third time, he could no longer escape and stamped a kick across Aguirre’s forehead: “There is a matter in which I agree with her and it is that what destroyed the Popular Party of Madrid was corruption and it is something that we are never going to allow. “Not like her, she went without saying.

Seeing how the PP is complicating life with the election of its president in Madrid is one of those unfathomable mysteries that are frequently found in Spanish politics. Casado does not have many compelling reasons to object to Díaz Ayuso taking over the job, even more so after his victory in the May elections. The idea that it is too much work for one person is so ridiculous that they have only dared to put it into circulation under the letterhead of anonymous sources. Several regional presidents of the PP are in that situation without their brains exploding. Before, Aguirre and Cristina Cifuentes enjoyed both positions in Madrid.

For some reason that doesn’t suit him, Casado is getting people to believe that his state of mind in relation to his protégé has gone from suspicion to panic. The headlines that claimed a few months ago that Ayuso could steal Casado’s chair in the next two years were somewhat premature. Despite the immense support it receives in the right-wing press in Madrid, it would be convenient for it to offer a broader legislative curriculum than to have approved a law to place political commissioners in Telemadrid and eliminate taxes with which almost nothing is collected. Because he does not have, he cannot even boast of having approved budgets.

All this hubbub, in which Aguirre moves like a barracuda in the water, will end up making us believe that what Casado seeks is to protect his position from 2023 in the event of being defeated again at the polls. When an opposition leader hints that the day after defeat is a situation he must protect himself against right now, at that point he has already begun to lose those elections.

“Chiquilicuatres” who don’t know anything about politics. A mayor who lets “kids” warm his ear. Rookie and dim-witted politicians in Genoa that it is almost better not to think, because it will be worse. A national leader who does nothing but make mistakes, which is why he is not Sánchez’s greatest political adversary. Aguirre has made such a disastrous portrait of the leadership of the PP that the PSOE could include it in its entirety in one of its arguments. They can add more spark to it, but they are not going to improve it. No one stabs the knife with as much enthusiasm as the Countess Consort de Bornos.