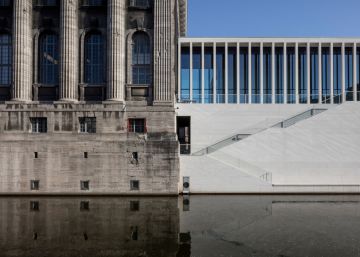 A new cultural icon joins the island of Berlin's museums. The James Simon Gallerie fastens with its straight lines and its air of sobriety the complex of five centenary buildings, declared a World Heritage Site. It also serves as an entrance from the south to a concentration of artistic and archaeological treasures, which is one of the great claims of the city. With his presentation to the press yesterday, the British architect David Chipperfield, which Berliners know well for their work in the Neues Museum (1997-2009), famous for serving as home to Nefertiti, continues with a link with the Museum Island that dates back to 1997.

The new temple of concrete and glass, baptized in honor of James Simon, important patron who enriched its museums by donation, has 4,600 square meters and cost 134 million euros. The result achieves a common effect in Chipperfield: it contrasts with the five old buildings on the island, yes, but it manages to do it in a paradoxically harmonious way.

The idea of ​​a space in which to concentrate all these artistic treasures is due to the Prussian King Frederick William IV, who described his vision as a "cultural acropolis", a sacred sanctuary for the arts and sciences, designed to consolidate the capital as the headquarters of the "largest universal museum on the planet".

The British architect and the director of the founding of the Prussian Cultural Heritage, Hermann Parzinger, yesterday took a step further in fulfilling that dream with the opening of the James Simon, which officially opens today Chancellor Angela Merkel. "It is the new cultural symbol of Berlin in the 21st century," Parzinger told EL PAÍS. "The construction of Chipperfield is the architectural antithesis of the five museums on the island." The architect, more humble, was satisfied with having achieved that the gallery solve logistical problems and infrastructures of the whole. "At the same time, it materializes a unique architectural vision for the island," he said in a conversation with a group of journalists.

The doors will open to the public on Saturday. A monumental staircase will lead to the entrance, from which it will be possible to access an auditorium with capacity for 700 people, visit a cafe overlooking the River Spree and move through various levels with access to a temporary exhibition hall (which inaugurates a shows multimedia to the patron who gives it its name) and the Pergamon museum. In the underground, the Chipperfield project has installed an "archaeological passageway" that will allow direct access to three other museums: the Neues Museum, the Bode Museum and the Altes Museum. It is scheduled to be alive by the end of 2030.
The opening of the James Simon ends a long and controversial story. When Chipperfield announced its first sketches, more than 10 years ago, the press described the project as the "most expensive wardrobe in the world".

The concrete columns surrounding the building, in addition to offering a beautiful architectural show, also incited a poisonous comparison with the work of Albert Speer, Hitler's favorite architect. Chipperfield ignored those criticisms.

"This building is also a tribute to one of the most important patrons of the Berlin museums and, through him, to all Jewish patrons without whom these collections would not have been possible," explained Michael Eissenhauer, director of the State Museums of Berlin Simon financed several archaeological excavations in the Middle East from 1911, in which the bust of Nefertiti was found, which today is one of the best known pieces of the island and is located. "It's a way of doing something against oblivion," Eissenhauer added.