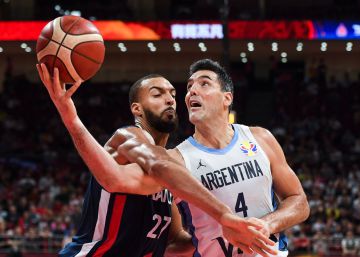 The World Cup final will be the prize for the most voracious teams. A matter of hunger, Argentina had been waiting for 17 years to enjoy a planetary banquet that did not appear since the Indianapolis silver and devouring Serbia did little. And France arrived satiated at the event after its great victory against the USA Team. The result was a game dominated from beginning to end by the intensity and fang of the vibrant litter guarded with passion by Luis Scola.

The marabunta albiceleste ruled the staging with 10 points of his captain and sent France to the couch before he had risen from the nap. Just Fournier resembled the thrilling team that was encouraged to strip the United States with a display of muscle and basketball. The Herculean Gobert trail disappeared facing the hoop and was reduced to half a dozen bounces. Just the chapter in which Argentina began to grow big, the hunger statistic.

With Gobert cloudy, De Colo at half-mast and Batum subtracting, it was Labeyrie who stepped forward. But it was a poor argument against the feverish basketball of Campazzo and the solemn bearing of Scola. With an insatiable defense, Argentina left its rival at 18 points at the end of the third quarter, at 14 at the end of the second and at 16 before the finish line. The albiceleste piggy bank grew and grew to 15 rental points (60-45, m. 28). Believing that they were on time to arrive, France never finished booting.

“Come on, come on, Argentinaaa. Come on, come on, win. That this flattering bar. It does not leave you, it does not stop cheering you, ”the swollen albiceleste sang in a corner of the stands of the Wukesong Sport Center. It was enough with those two hundred fans to recreate a mini Bombonera in Beijing. France approached 8 in a cargo substitute (63-55). But that was the moment chosen by Scola to dismantle in the middle of the square. The Argentine totem nailed two consecutive triples, polished his statistic to 28 points and gave a final as a tribute. Still without equipment, by the way. Your team is an entire country.