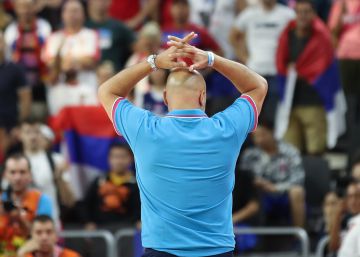 Before starting, the China World Cup It was news for the dubious honor of accumulating about a hundred player resignations. Embedded between unbeatable seasons and with the perspective of the next Olympic summer, many of them, the championship seemed an inhospitable adventure. On the ground, reality is confirming their fears, for Calvary and recognition of those present. In just 20 days in the country of 1.4 billion inhabitants, the Spanish team will accumulate 24,000 kilometers traveled, six transfers, four changes of venue, more than 40 hours of flight and only 10 games (two friendly and eight officials). A challenge to the resistance of the protagonists of a show that ends this weekend in the final four Beijing with Spain, Australia, Argentina and France fighting for the title. A wild tournament with tints of Chinese torture in which teams will spend six times more time on airplanes than on the runway. The most obvious data of an encrypted World Cup and with all the saturated arteries: vials, bureaucratic, organizational, computer …

On August 24, Spain left for Ningbó to finish off a world-wide shoot on Chinese terrain that had previously included a round trip to Anaheim (California) to measure to the US, already accumulating 9,300 kilometers and 13 hours of flight before the expedition definitive The yincana had just begun. "Going to Los Angeles in the middle of the preparation and then going back is not ideal, but it is what we played and we have done it," Marc warned stoically before the battle. “It is a very tough tournament because we have to add trips and matches. In such a demanding competition it is very important to recover and, under these conditions, we only have to put ourselves in the hands of the professionals who help us, ”Ricky explained after reaching the semifinal pass. The regret is repeated from the beginning of the trajín, identical in dimensions for all teams only by changing the route between venues. “We finished our game last night and returned late to the hotel. In the morning we get up early to go to the airport, travel again, with two hours of flight, and one more on the road when I arrive … I would be crazy if I had also had to train my players ”, cried Djordjevic during the second phase, in which the recuperators were already the stars of each team.

Those professionals that Ricky cited, the physios of the selection, were seized yesterday at the airport all the boats of cold sprays that they took to mitigate the pain of the blows, in another horrific episode of a tour governed by the Chinese authorities for derision of the FIBA ​​itself. His peculiar way of understanding security has desperate all the members of the World Cup, including the event's own organizer, collapsed by the demands of his host – "They rule, it's not in our hands", they repeat each controversy– . The same security that delayed the formalization of visas and kept three Spanish journalists (already accredited from the beginning and who were only looking for the update of their credential due to the change of headquarters) before the Spain-Poland of rooms is retained free access of fans to some pavilions without further inspection of their belongings, however bulky they may be. Excesses of heat volatile, random and inexplicable. The first party of Spain in Guangzhou special envoys (at this point experts to avoid the censorship of communications in the country through VPNs) agreed with a temporary pass written by hand because the officers had not arrived. In return, for the intention of the parties, new figures had been incorporated such as that of a councilor at the foot of the court to choreograph the animation of the fans as if it were a television set.

The World Cup has not penetrated in China, there have barely been posters at the eight venues and their respective airports, with few information tables in the venues where Esperanto was practiced against the idiomatic clash and the lack of knowledge of English. The alleged internal impact has been diluted in immensity. The pavilions have not been filled so far, awaiting follow-up in Beijing. At the doors of many of them resales appeared with little conviction, they knew they were expendable. In all the matches at the Wuhan headquarters, the first quarter advanced, there was an indisputable open day because of the excitement of fans that traveled the stands in search of a good place. His prize allowed to fill the television plan on the fly.

Waiting to know how the fans respond at the close of the tournament in Beijing, the television that owns the rights to the championship days ago, since the elimination of China, which has restricted the hours and spaces dedicated to basketball. Now they repeat in loop some worked anthologies of the best goals of Rooney, Lewandowski and Cristiano Ronaldo. The World Cup arrives in the capital in the middle of the celebration of the Mid-Autumn Festival (harvest festival with origins in the cult of the moon), one of the most important commemorations in China after the Chinese New Year and it doesn't seem like basketball It will disturb the tradition of reuniting as a family to look at the sky. As the organizers of the FIBA ​​have been doing, as a regret, since the beginning of a chaotic championship.