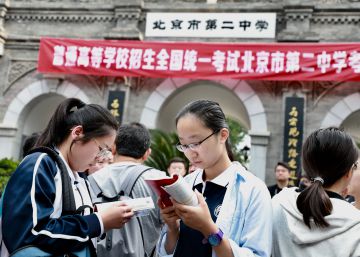 Mainland China – represented by Beijing, Shanghai, Jiangsu and Zhejiang – ranks first on the PISA educational assessment podium with an average score of 578 points. The special administrative region of Macao has been awarded bronze (542) ahead of Hong Kong, fourth (530). Only another Asian country, Singapore, second (556), has managed to stand in the hegemony of the Chinese education system, which, however, is criticized within the country for the pressure suffered by schoolchildren.

China triumphs in everything: reading, math and science. Even "its lower 10% showed a reading capacity higher than the average of the OECD countries," says Ángel Guría, secretary general of the agency, in the preface to the report. Although victory has, however, trick: The four selected regions are the richest in the country. Sorted according to your GDP per capita according to official data of the Chinese National Bureau of Statistics, Beijing is the first, Shanghai the second, Jiangsu the fourth and Zhejiang the fifth of a total of 31 provinces of very unequal wealth. Only the figures of the latter – 98,643 yuan in 2018 (about 12,600 euros) – account for more than double any of the lower half. Precisely for that reason, the report itself recognizes that the educational level in these four territories, whose joint population exceeds 180 million inhabitants, "is far from representing China completely."

Lenora Chu, journalist and author of the book Little soldiers –Little soldiers, in English— on the Chinese education system, he points out by telephone that, despite the conditions, “the results deserve attention since, although the sample includes the most prosperous provinces in the country, its level of income per capita is still lower than average of the OECD countries (36,750 euros in 2018) ”. “There are three fundamental reasons that explain this,” he adds, “the first is that schooling for children is faced as an effort by the whole family, to the point of constituting the first household expense; the second is a learning method in which memorization has a greater weight; and, finally, a growth mindset: students understand success as a matter of work rather than intellectual capacity. ”

Education in China has been traditionally characterized — making speak popular science— for intensive work. The results of PISA reflect, in effect, that Chinese schoolchildren are the second most applied with more than 55 hours of study per week adding classroom and home, well ahead of the OECD average 44. "The Chinese government needs its citizens to believe in the system, on the idea that if you work hard enough you will reach a better future: that is the basis on which the party has built its legitimacy," Chu says. Schooling is for young people, therefore, "a way to ensure that they stay on that ladder."

The educational system of the Asian giant is crossed by successive firewalls: large exams such as the zhongkao —The end of primary school— or the gaokao –before entering university– Without which it is not possible to reach the next step. This causes that, as if it were a competition, many families choose to complement their children's learning with a second school, in order to guarantee the best possible results in class. This is the case, for example, of Chen Shiyu, a 10-year-old girl, a student at a primary school in northern Beijing. According to his mother, Chen has a private tutor with whom he studies Chinese, English and mathematics, the three fundamental subjects at his age. "We do it to make sure he passes the level and, above all, for his personal confidence: if things don't go well in class, he won't have self-confidence and won't want to go to school."

This means that, on a normal day, Chen finishes his second round of classes at five in the afternoon. Until ten o'clock, when he goes to bed, he will have to have dinner and do double homework, school plus academy, for an average of three hours, so his mother estimates that he only enjoys one hour of free time up to date. "All parents suffer from not being able to let their children enjoy childhood," he explains, "but at the same time the rest of the children are learning things and there is enormous competitive pressure."

The Chinese education system thus maintains a strange balance: on the one hand, excellent results in international tests; on the other, strong criticism for producing “graduates with high scores, low skills and weak health,” as stated by researchers Xu Zhao, Robert L. Selman and Helen Haste in a study titled Academic stress in Chinese schools. This text echoes a survey according to which, of a sample of more than 2,000 Chinese children, 81% said they worried "a lot" about exams and 73% said they had suffered physical punishment because of their school performance. He Blue Book of Education published in 2014 by the Government of the country and noted that 93% of 79 suicides of young people investigated that year were related to academic issues.

All this is starting to change. In the district in which Chen lives, local authorities have begun to limit the amount of duties, in some cases until they are completely eliminated. “The ministry of education is developing an enormous effort to reform the system. They believe that children work too hard and want to prepare them for a more modern education, emphasizing creativity and flexibility, ”explains Chen, who is not optimistic. “I think that fundamentally things have not changed. Children may stop having homework at school, but they will continue to perform tasks related to their extracurricular activities to gain more competitive advantages over their peers. ” A phrase from the PISA report summarizes what is at stake: "the quality of schools today will feed the strength of the economy tomorrow."