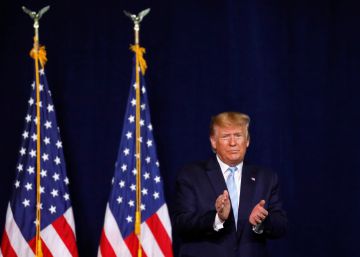 The commercial war is being the hallmark in economic matters of the presidency of Donald Trump. Have been almost two years of constant threats from the White House and of a tariff escalation that has only been put to a halt in the final stretch of 2019, when the two world powers reached a preliminary agreement.

The rise in tariffs has taken its toll on the global economy. But beyond the deterioration of the economic indicators, with manufacturing activity as one of the most sensitive components, there are other consequences that, although they have not alarmed the market at the moment, could lead to some shock in the future. In its fight for world leadership, the US does not forget that China is one of its main creditors.

The US has a total volume of debt close to 19 billion dollars (17 billion euros), according to Bloomberg data as of September 30, 2019. 35.7% of this amount is held by external holders, that is, from other countries. 12% (2 billion euros) corresponds to the Federal Reserve and the remaining 52.6% (9 billion) are bonds and obligations acquired by private investors. In the category of external holders, China and Japan stand out as major creditors.

In the last two years, and in parallel to the commercial war, China has been undoing its US bond portfolio. From January 2018 until October 1, the Asian giant reduced it by 5.7%, to have about one billion euros. A movement contrary to that made by Japan, which has increased it in the period by 9.6% and touches the 1.1 trillion euros. This has been enough for the Asian giant to go from being the second creditor to the third, a position that has been occupied by the Japanese country. Only above them is the Fed with two billion euros of bonds in its possession.

The sale of US bonds by the Chinese Government has accelerated in the last 21 months. However, Félix López, director of the manager of Atl Capital, points out that this is not something new but is part of the trend that prevails in the last five years, during which time China has gradually lowered its portfolio from treasuries. “The decrease in US debt in the hands of the Chinese Government is a trend that although it has been amplified in the last two years, coinciding with trade tensions, has its origin in other issues,” he says. Lopez points out that The key to explaining this is not in geopolitical tensions, but in the transformation of the Chinese economy, which seeks to move from being an export economy to another oriented towards consumption, a characteristic characteristic of developed countries. “The sale of bonds by China will intensify as its economic structure changes, a process that is not easy and that as has been proven in other cases lasts between 20 and 30 years because for its precise success of a broad middle class . We are now in the first moments, ”says the expert.

In the coming months, the US and Chinese delegations will proceed to negotiate phase two of the agreement, where some of the issues that distance both countries, such as intellectual property, will be addressed. As seen in the past, Each power will lay hands on its tools, that although in the case of Washington the tariffs have been, in the case of Beijing it is also the threat of stopping buying and even selling US debt, something that would result in a fall of the dollar accompanied by the rebound in yields. This situation is not new because in 2015 the Asian giant broke off debt amounting to 31,000 million dollars between June and July. In just two months, almost everything purchased in the previous six months was sold.

From Atl Capital they do not consider this option as their main scenario. If China sells excess US debt, it will also depreciate the value of its bonds in its portfolio. They believe that neither of the two countries is interested in breaking this weak balance and embarking on an open war. “Only in that scenario would China sell important bonus packages. In the hypothetical case that this occurred, other countries that slip into the main debt holders such as the United Kingdom, Luxembourg or Ireland would assume the role of the Asian giant, ”they add.

Federal Reserve. From January 1, 2018 to October 1, 2019, the US central bank had reduced bond ownership by 5.3%, as a result of the balance sheet reduction, a current that broke in September of this year. Powell has gone a step further and in the fourth quarter of 2019 announced that he was beginning to buy letters worth 60,000 million dollars, a strategy that will continue until at least March.

Other creditors. The third external creditor is the United Kingdom, which in the last two years has increased its US bond portfolio by 37%, to 0.3 billion euros. The fifth place is for Brazil (0.26 billion) and the sixth Ireland (0.25 billion).

“Technology allows us to increase the quality of customer service”