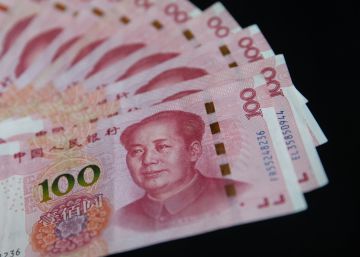 The cocktail that threatens the global economy already has all the elements: commercial attacks and counterattacks, sharp declines in the stock market, a growing volume of debt that offers negative returns – that is, investors are forced to pay for acquiring sovereign bonds – emergency measures by central banks to fill the system with liquidity and now strong movements in the currency markets. Stock markets across Europe fall sharply on Monday, with a mid-afternoon decline of 1.9% in New York, 1.8% in the Eurostoxx and 1.3% in the Spanish Ibex.

The People's Bank of China (BPC) did not make much effort to deny the link between trade tensions and turbulence in the currency market. In a statement, the Chinese central bank explained the weakening of the yuan by protectionist practices and the approval of tariffs. In spite of everything, the governor of the BPC, Yi Gang, said on Monday night that his country will not enter “in a competitive devaluation and that it will not use the yuan exchange rate” to increase its competitiveness.

After the closure of Asian markets, when the United States began to wake up, Trump reacted with a double attack: against China for weakening its currency and against Jerome Powell, the president of the Federal Reserve that he himself appointed. “China has reduced the price of its currency to almost a record low. This is called currency manipulation. Are you listening, Federal Reserve? This is a great violation that will weaken China a lot, ”the president tweeted.

China dropped the price of their currency to an almost a historic low. It’s called “currency manipulation.” Are you listening Federal Reserve? This is a major violation which will greatly weaken China over time!

Analysts point out that the BPC has consciously dropped the value of the currency, while the institution ensures that everything is a market thing, although it recognizes that the decline is directly related to the US tariff increase. Beijing had promised "retaliation" after Trump said he would impose 10% rates for Chinese products valued at $ 300 billion as of September 1. To this threat, the Chinese Government responded announcing that it would take "countermeasures."

According to the Yicai financial news portal, each dollar was exchanged for 7.0258 yuan according to the rate onshore -the operated in local markets- after 10.00 local time, midnight in Spain, after having increased 1.23% in morning operations, which is the highest share since April 2008.

That the rate onshore Growing up is a sign that the renminbi (official name of the currency) is weakening, since it is more expensive for yuan holders to buy dollars. For its part, the rate offshore (the one operated in international markets such as Hong Kong) rose 1.38% and stood at 7.0683 yuan per dollar. It was the first time that the yuan rose above 7 integers for every dollar – considered by many analysts a psychological barrier for investors – since the market offshore It was opened in Hong Kong in 2010.

One of the main complaints of the US Government in the commercial conflict is the complaint that Beijing allegedly manipulates its currency to avoid appreciating too much and, therefore, its exports lose competitiveness.

In May, the US Treasury Department kept China on its list of economies that deserve "attention" for its exchange practices, and said it continues to have "significant concerns" in this regard, especially with regard to the "misalignment and underestimation" of The Chinese currency against the dollar.

A weaker yuan means that Chinese dollar-denominated products are cheaper, something that would help curb the negative effect of the new US tariffs on their competitiveness, although the price to be paid will be an increase in the cost of imports at a time when the one that Beijing is still talking about opening its markets to the world.

"The CPB has allowed the yuan to fall to its lowest level in a decade in response to trade tensions. It seems that it has decided that, seeing the increasingly bleak prospects of an agreement with the US, it is worth boosting the sector Chinese exporter via depreciation, although it attracts Trump's anger, "said Julian Evans-Pritchard, an analyst at Capital Economics.

The analyst recalls that, on previous occasions, the BPC intervened to prevent the yuan from crossing the seven-dollar line, and states that this action "suggests that they have practically abandoned hope of (signing) a trade agreement with the United States." In his opinion, the fact that the central bank has linked depreciation with tariffs shows that they have "turned the exchange rate" into a weapon.

However, the BPC defended on Monday that the yuan fluctuations are adjusted to the market, but that the national currency "remains stable and strong", while guaranteeing that it has "experience, confidence and ability" to maintain stability within an "appropriate level" – although it did not indicate what that threshold is – in exchange rates.

In the long term, Evans-Pritchard believes that the BPC will try to make the depreciation process gradual, although it expects a 5% to 10% drop in the value of the yuan against the dollar in the coming quarters. According to forecasts by Capital Economics, a depreciation of 10% would cause Chinese GDP to increase 0.2%, while tariffs announced last week by Trump would lower it by 0.1%.