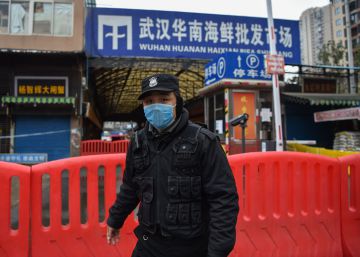 It was enough to use some keywords: “hunting”, “wild flavor”, or “totally natural”. On some of the most popular Chinese e-commerce platforms, it was possible to find the most exotic meats. As the civet, the feline that served as a transmitter to humans of the virus causing SARS in 2003, at 350 yuan (46 euros) per kilo. Or peacock. Or giant salamanders. It’s not that easy anymore, at least for a while. As a result of the new Wuhan coronavirus, transmitted to humans by an animal sold in one of the markets of that city, the Chinese Government has just banned – although for the moment, only provisionally – the trade and transport of wild species.

The joint order issued by three official entities, including the Ministry of Agriculture prohibits any type of trade with these animals, dead or alive, on any platform, although it specifically mentions electronic commerce, restaurants, supermarkets or markets. Local authorities will increase inspections and punishments for those who violate the ban will be “severe.” The breeding farms of these animals will be quarantined.

“Consumers must fully understand the health risks of eating wild animals, they must stay away from the salvaje wild taste’ and eat healthy, “says the standard.

The step has been taken after scientists traced the origin of the new coronavirus, which has killed at least 56 people and infected more than 2000 in China alone – and more than thirty in the rest of the world – to a Market in Wuhan City, the epicenter of the infection. Although theoretically the Huanan market – now closed to lime and song – was dedicated to the sale of seafood and fish, inside it also sold all kinds of caged animals. A price list that has circulated through social networks included a hundred species, from wolf cubs to hedgehogs or camel meat. Also marmots, foxes or monkeys. Or snakes, mice, cats and dogs.

Scientists have not been able to identify the species with certainty, but they have determined that the coronavirus 2019-nCoV passed to humans through an animal. A group of Chinese scientists has published that it was probably a snake; others believe it could be a bat.

A situation identical to the one that triggered the SARS epidemic in 2003: the scientists determined that the transmitter of that coronavirus -represented with that of Wuhan- had been the civet meat sold in a Canton market. That focus eventually infected 8,422 people and killed almost 800.

Then, as now, trade with wild animals was banned. But, as now, temporarily. Interest in the consumption of these meats also decreased. But temporarily.

China remains a voracious consumer of wild animal products, to the point of increasing the risk of extinction of some species. Demand, either as food or for use in traditional medicine, has grown in parallel with the country’s prosperity. Today, among certain sectors, eating meat the more exotic and difficult to obtain is a way of exhibiting social position. In other cases, such as dog consumption at the Yulin festival in the south, eating that meat is almost an act of claiming alleged national roots.

Markets like Wuhan’s are not rare. An investigation that the newspaper Beijing News He published last week he found that, one month after the first contagions were detected in Wuhan, it was still possible to find markets willing to sell, restaurants willing to prepare and, in internet forums, consumers willing to pay what they did Missing for this type of food.

The problem in these markets is not just the hygiene conditions in which the animals are kept, often deficient. Also the difficulty of establishing the origin of the copies. Although there are farms that are dedicated to the breeding of these species with a license – it is estimated that those of tiger host about 6,000 copies-, activists denounce that it is not uncommon for wild animals captured to end up in one of them; or that licenses have been obtained illegally.

Although the virulence of Wuhan’s coronavirus outbreak has caused the voices against these practices to multiply. Last week, 19 prominent scientists sent a open letter to the government to request the limitation of that trade. “It is not only important for ecological conservation, but for its great importance to control public health risks,” they warned. Experts also ask that the “legal gaps” in the permits for domestication and breeding of wild animals be resolved, allowing traffickers to hunt free animals and sell them in the market through farms.

“Viruses transmitted by animals are the most frequent human pathogens. They represent less than 15% of all known human pathogen species, but more than 65% of pathogens discovered since 1980, ”said Christian Walzer, the NGO’s executive director, in a statement Wildlife Conservation Society (WCS), based in New York.

The consumption of wild meat has also been the subject of a heated debate in Chinese networks. “If humans do not live in harmony with nature, of course nature will hit us back!” Commented a Weibo user, the Chinese Twitter

At the moment, the ban that comes from Beijing is only temporary. The order issued this Sunday specifies that it will last only “until the epidemic situation disappears throughout the country.”

Organizations such as the WCS demand that it be made permanent. Not only in China, but all over the world. “If those markets continue, and the illegal and unregulated human consumption of wild animals continues, the public will continue to face greater risks of new viruses, potentially more lethal and sources of future pandemics,” says Walzer.

The Huanan market has lost the hustle and bustle that characterized it. Empty since the first cases were detected in December and it was determined that there had been the origin of the infection, it does not know if it will reopen one day. These days it looks melancholic, a reminder to the city of the catastrophe that has killed 45 residents of this town and infected more than 600.

The site, presided over by a huge blue sign with its name “Huanan Market (‘South China’) of Seafood in Wuhan”, is composed of two sections, east and west, two covered spaces separated by Xinhua Street and the which is entered through eleven parallel passages. Each position has its own space. All of them have kept the bars down and the accesses are protected by police appointment since the beginning of the year. “Between the two sections there must be about five hundred posts in total,” explains one of the five security guards responsible for patrolling the area, while preventing access to pedestrians. “I spend here all day. I know it can be dangerous, but I think it is an important task. ”