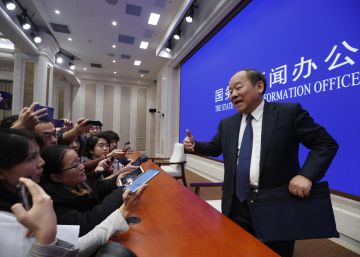 With 2019 already in the history books, China has squared its economic balance. In the last year, its GDP grew by 6.1%, as announced by the National Statistics Office this morning. This figure represents the lowest rate in 29 years, attesting to both the progressive slowdown of the Asian giant and the dizzying speed at which it has advanced in recent decades.

The data corresponding to the fourth quarter, published today, was the missing piece to complete the mural of the year. Between October and December the Chinese economy marked 6%, Guarismo identical to the third quarter, which is a repetition of the lowest result since in 1992 the Chinese authorities began to publish the quarterly evolution. It is not necessary to go back far to find the previous minimum: it corresponds to the second semester of this year, in which the economy picked up 6.2%.

This 6.1% makes 2019 the least dynamic year since 1990, when political and social instability after the Tiananmen massacre reduced growth to 3.9%. The episode, which took place in May 1989, also affected the economic performance of the previous year (4.2%). Obviating both results, to find a lower data than today it is necessary to go back 38 years, to 1981, when the GDP advanced by 5.1%.

Despite representing another descending step in the historical series, this Friday’s figure meets the government’s forecasts, which last year set its ambitions between 6.5 and 6%. In this way, China remains on the path that will allow it to achieve the objective of doubling its size in this 2020 with respect to a decade ago. The data are also in line with the forecasts of the International Monetary Fund (IMF) and the World Bank.

“6.1% fit the trend of development of our economy, which goes through a gradual decrease in the growth rate. It is not easy to achieve a 6.1% rate while the rest of the world is in negative projection, ”notes Hongcai Xu, chief economist at the Chinese Center for International Economic Exchange. “In addition, our efficiency is advancing: employment data are positive, the CPI and the financial markets maintain stability, the balance of payments is balanced … Overall, I think that the Chinese economy in 2019 has continued to progress solidly “

Other data published today also show a positive reading regarding the state of the Chinese economy. Retail sales, a key index for assessing consumer spending in a country that seeks to boost domestic demand, grew 8% in 2019, one percentage point less than in 2018. Industrial production, caliber of Chinese manufacturing, advanced 5.7% in the last year, above expectations but also less than the previous year (6.2%).

A year marked by the commercial war

The Chinese economy has been shaken this year by the trade war with the United States, although the future could be promising. Just two days ago both countries signed the first phase of the agreement, which, despite not solving the conflict in perpetuity, allows at least a truce to be reached.

The text signed by President Donald Trump and Deputy Prime Minister Li He, right hand of Xi Jinping in economic matters and leader of the Chinese negotiating team, states that the Asian giant will deepen the opening of its domestic market, increase the import of raw materials and It will improve the protection of intellectual property. The United States, for its part, undertakes not to raise the current tariffs, worth 323,000 million euros, which nonetheless remain in force.

“China has made more commitments than we thought likely a few months ago, in exchange for relatively little from the US,” said Mark Williams, chief economist for Asia at Capital Economics, in a consultant report published Thursday. “The likelihood that China will not keep its promises, but that may not matter for the long-term success of the negotiations.”

The agreement leaves resolution pending in a second phase, which Trump says will be the last, the most thorny issues in the conflict, such as cybersecurity or lack of reciprocity for US companies on Chinese soil. Also flutter around the conversation the future of the technological Huawei, which faces a veto by the US administration since last May for representing a supposed threat to national security.

In Xu’s opinion, “the agreement will partially reduce tensions between the two countries: that is already good news.” This achievement marks its forecasts for next year: “Our domestic demand, investment and consumption will remain stable, so in 2020 we will see a growth of 6%, in line with the IMF forecasts, just one tenth below this year’s figure. ” Meng Rui, Professor of Finance at the China-Europe Business School (CEIBS), agrees in his forecast, while pointing out that the greatest threats will go through “high leverage, industrial overcapacity and hypothetical weak consumption.”