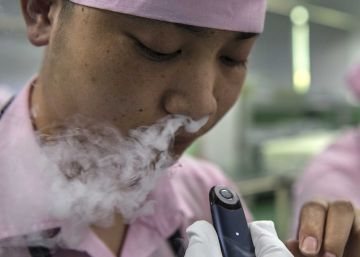 The Chinese Government has declared war on electronic cigarettes. Since the beginning of November, the sale and advertising of these products on the Internet has been banned, and a plan to ban their use in public spaces has been announced. This movement threatens to close the first market of an industry that faces growing international pressure.

The campaign began on November 1, with a joint statement from the State Administration of Tobacco Monopoly and the State Administration of Market Regulation in which they urged companies that sold electronic cigarettes to stop their operations on-line. "They represent a threat to safety and health, especially of minors," said the representative of the regulatory body, according to picked up the state news agency Xinhua; who also added that many parents had expressed concern about the ease of acquiring these products. Already in August 2018 the government had banned its sale to minors.

Despite the ambiguity of the text, which did not clarify the scope or legal basis of the ban, the companies reacted quickly. Just a few hours later, a majority had already closed their digital services and publicly announced their support for the measure. "We will completely close all our sales and advertising on the Internet," said RELX, the company of social networks vaping most popular in China, with a market share of over 60%.

Ou Junbiao, head of the Committee of the Electronic Cigar Industry in China, said in statements to The New York Times that the lack of clarity could be due to the concern of the regulator to lose the source of income that taxes on the sector mean, while ensuring that “there is still no law or regulation in China that prohibits the sale on-line of electronic cigarettes. The key was in the first word: "still."

Just a week later, on Thursday, November 7, the government published a document special that was stamped with the stamp of eight public institutions, including the National Health Commission. The letter announced the implementation of a strategy to combat the “increasing use” of electronic cigarettes, while urging the development of a legal framework that would prohibit the use of these products in public places, without detailing when it would take effect . "There is no evidence that electronic cigarettes help people quit smoking," he read; therefore "the authorities should not allow them to be marketed in this way."

These new restrictions add pressure to an industry under scrutiny and place China in the path of other countries like India, Brazil or Singapore, which have already banned the use of electronic cigarettes. Some US states they have also legislated against these products, which has been pointed out in that country as the cause of a strange lung ailment that in the last month has caused the death of 39 people and has caused the hospitalization of another 2,051.

China is the first global market in the sector, according to a study by the Public Health Research and Technology Supervision Group of Tsinghua University, with more than 7.4 million consumers. One of them is Pao, 33, who likes vape while working at the bar that runs in downtown Beijing. "The ban still hasn't affected me because I had several refills stored, but many stores seem to have stopped selling." He admits that he is "worried" about the lack of information regarding the effects of the use of electronic cigarettes, but if he can he will not give up his habit: "When I finish what I have left I will see how I can manage."