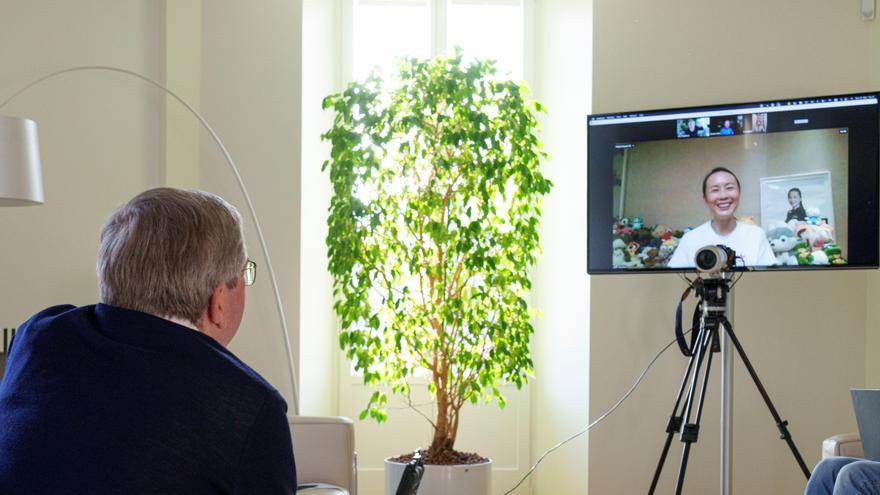 The call between the president of the International Olympic Committee (IOC) and the tChinese enista Peng Shuai, in which she said to be “fine”, is “enough” for the media related to the Chinese government, which only mention the case before an international audience on networks such as Twitter, vetoed in the Asian country.

“His appearances in the last few days are enough to eliminate worries”The director of the Global Times newspaper, Hu Xijin, tweeted this Monday, who already announced last Saturday on the same network that the tennis player was going to appear in public.

In the last days, Government-related media distributed several videos and images of Peng on Twitter. Given the fears for the whereabouts of the tennis player, who denounced on November 2 sexual abuse by former Chinese Deputy Prime Minister Zhang Gaoli.

However, any mention of Peng continues to be completely censored in the Chinese media and social networks, and even the live signal of some international networks such as CNN fades into black when they begin to talk about the case, according to the television itself on its page. Web.

The Ministry of Foreign Affairs continues to insist that the Peng case “is not a diplomatic matter,” although on Monday, spokesman Zhao Lijian stressed that “has been seen recently” in response to journalists’ questions.

Peng held a half-hour conversation with IOC President Thomas Bach on Sunday, informing him that he is “fine” at his home in Beijing, emphasizing that he would like his “privacy” to be respected.

It remains to be seen if these explanations are sufficient for voices such as the Women’s Tennis Association (WTA), which previously called for Peng’s allegations of sexual abuse to be “thoroughly investigated”, or for human rights organizations.

According to Yaqiu Wang, of Humans Right Watch, the conversation between Bach and Peng would have been carried out under “coercion.”

“The IOC is being complicit in the propaganda machine and in a case of coercion and forced disappearance by the Chinese government,” the activist tweeted today.

For Global Times, those who suspect that the tennis player is acting under pressure “must have a dark side.”

“Can a girl really fake such a radiant smile under pressure?” Her director Hu asked on Twitter on Monday.

On the other hand, there is also no news about the politician accused of the abuses, Zhang Gaoli, who left public life three years ago after leaving office.

Peng accused Zhang of forcing her to have sex in a letter posted on Weibo, but the letter volatilized just twenty minutes after it was sent.

The case explodes less than three months after the start of the Winter Olympics in Beijing, which the United States “evaluates” to boycott at the diplomatic level for alleged human rights abuses by the Chinese government.

China considers that such accusations are nothing more than a “smear campaign” and that “politicizing sport goes against the Olympic spirit,” spokesman Zhao stressed today when asked about this possible boycott, which, according to the British newspaper The Times, other countries such as the United Kingdom, Australia or New Zealand could also join.

“We will have a safe and brilliant Games,” he said.