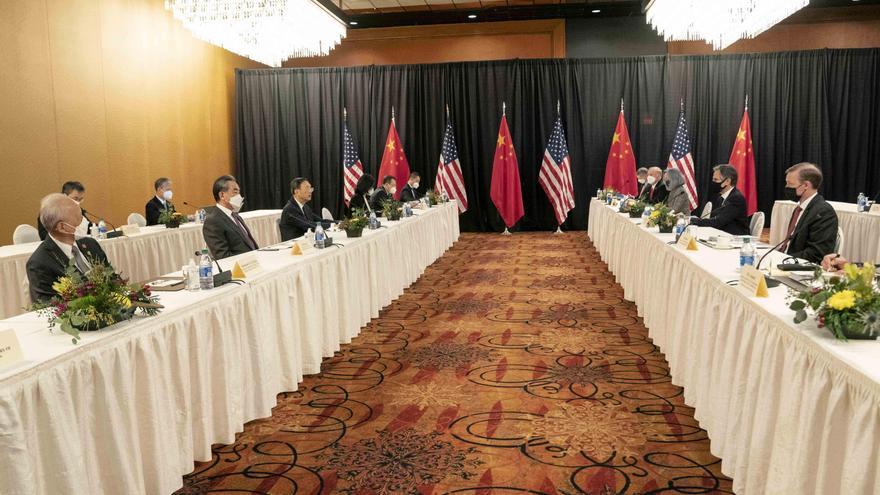 Beijing, Mar 19 (EFE) .- China and the US agreed at their meeting in Anchorage (Alaska) to create a working group on climate change, as well as to carry out “mutual and beneficial cooperation” in their bilateral relations to “avoid misunderstandings and misjudgments, “Chinese state television CCTV reported today.

The state network, which cites statements by the leaders of the Chinese delegation in the Alaska talks, assures that they agreed to “promote the healthy and stable development of Sino-US relations in accordance with the spirit” of the telephone conversation between Chinese President Xi Jinping and US President Joe Biden on February 11.

The head of Foreign Affairs of the Communist Party of China (CPC), Yang Jiechi, and the Chinese Foreign Minister, Wang Yi – who led the Asian delegation at the Anchorage meeting – told CCTV after the meeting that both parties committed ” to strengthen dialogue and cooperation in the field of climate change “for which they will establish a joint working group.

As both explained, the delegations of China and the United States – led by Secretary of State, Anthony Blinken, and National Security Advisor, Jake Sullivan – also discussed reciprocal agreements to vaccinate their respective diplomatic and consular personnel against the coronavirus.

They also spoke of facilitating “the activities of the institutions and diplomatic and consular personnel,” on both sides, as well as those “of the media and reporters in a spirit of reciprocity and mutual benefit.”

Both countries had also notably deteriorated in 2020, during the Trump administration in the US, their attitude towards the respective journalists, with Washington tightening visas and expelling Chinese communicators and Beijing expelling North Americans.

Chinese state television also notes that the two sides discussed “adjusting travel and visa policies, in accordance with the epidemic situation,” as well as “gradually promoting the normalization of personnel exchanges” between the two countries.

It also indicates that the Alaska meeting addressed issues such as the economy and trade, the armies of both countries, cyber security, Iranian nuclear energy, Afghanistan, the Korean peninsula or Myanmar.

Both delegations “agreed to maintain and strengthen communication and coordination”, “avoid conflicts and confrontations” and hope to “continue with this high-level strategic communication,” according to Chinese leaders.

In addition, the two sides “will strengthen coordination and consultation on multilateral activities such as the G20 and APEC,” the Asia-Pacific Economic Cooperation Forum.

According to the version of the Chinese side, the United States “reaffirmed its adherence to the policy of ‘one China’ on the question of Taiwan”, an island that the Asian giant considers under its sovereignty and object of confrontation under the Trump period, during which the territory received several visits from senior US officials.