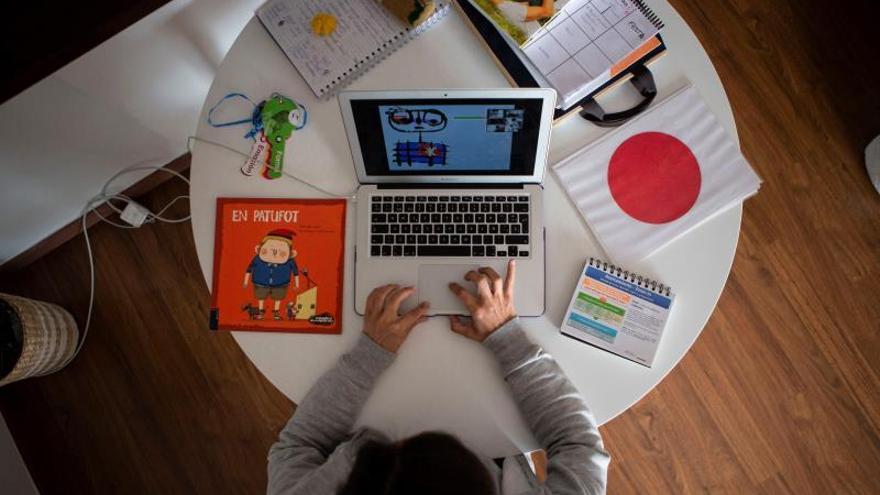 Lying in order to reconcile. Beg the doctor on duty to release you, even if you are negative, in order to take care of your son, who did test positive. These are the solutions left to many families who, in the middle of the omicron wave, face their own wave of conciliation. With the return of the school holidays, the infections through the clouds and the lack of a benefit or low ad hoc so that adults can take care of confined children, every man for himself is, once again, the great strategy.

The return to school brought new protocols to confine classes: the whole group is only sent home when there are five or more positives in a classroom, the confinements are seven days and you can return to class after a week, as long as accumulate three days without symptoms. On the other hand, sick leave only covers infected people, but not those who have sick and/or confined minors in their care.

"So, what do we do, let the children take care of themselves" asks the president of the organization MalasMadres, Laura Baena, who launched the campaign 'Boys and girls do not take care of themselves' at Christmas to show "the abandonment of families" and the absurdity of some protocols. "People are doing the 'thirteen fourteen' to get ahead these days. If you have the complete guideline and your child is positive, they don't give you leave, but what do you do with this child, someone has to take care of him," says Baena. The creator of MalasMadres assures that "many messages of desperation" arrive at her association every day and complains about "the lack of responsibility" of the administrations in the face of a situation that continues over time. This week they have reactivated their request for the Government to approve leave for mothers and fathers with infected minors.

"With my two-year-old son's classroom closed due to contagion and his father and I having to work, we have had to ask my mother-in-law to come from Valencia to Madrid to take care of the kid. A woman over 70 years old, at risk, in a house where there is also another 4-year-old boy who goes to school. The other grandparents, who usually give us a hand, are positive and confined, "says Lucía. Her partner works away from home and she is telecommuting right now, but that is not the solution: "Teleworking with young children is a unicorn, impossible."

Lucia's experience coincides with the evidence collected so far. This is confirmed by the sociologist Sara Moreno, co-author of Let them telework, which points out that teleworking is not an effective conciliation strategy, but rather a trap that harms women, especially. "The evidence shows that, although we are all locked up at home, women are still responsible for domestic work and care. Teleworking reinforces traditional gender roles: if you do not perceive yourself as the main person responsible for that care, you continue to have absolute availability for the work, while if you feel that responsibility on you, teleworking implies a simultaneous and continuous double presence that traps women, with a thousand open fronts, feeling that you are not doing anything right and with endless days to respond to everything".

Endika tells how, in a short time, he and his partner saw their four-year-old daughter positive for coronavirus and their other two-year-old daughter, also confined. At work, they suggested that she take free days to recover them later, something she did on the days she had to pick up her daughters from school at the beginning of the day to take them home and begin the respective confinements with them. His partner, however, was told by his superior that the option was, if anything, a leave of absence.

"So we gave him a hard time, my wife had had a slight fever the previous week, and that and the fact that our daughter was positive made the Department of Occupational Health tell her to take the leave," he explains. On his return, yes, his superior scolded him for having been on leave. "It is no longer that with the leave you lose money, but also. It is how the hell they tell you to go to work having two girls of 4 and 2 years confined to the house, one of them positive," Endika says indignantly.

"It is an incredible situation, the problem is that we are no longer facing an emergency, unexpected situation, we have been in a pandemic for two years, this reflects a tremendous lack of foresight," complains María Álvarez, a businesswoman and promoter of the 4suma campaign to claim a 35-hour work week no reduction in salary. "We have been able to invent vaccines that save us and prevent us from saturating hospitals and yet in the field of parenting we still have not solved the problems that we have had from day one. What has to do with the family is in a drawer" , go on.

Despite the fact that at the beginning of the pandemic several members of the Government, including the Minister of Labor, Yolanda Díaz, the Minister of Social Security, José Luis Escrivá, and the Minister of Education at the time, Isabel Celaá, spoke of a benefit or permit that allowed mothers and fathers to take care of confined children, the Government ruled out that measure, which has never been approved.

Álvarez, who lives with her two children, is now spending her fourth confinement at home in a month. “Since I am a businesswoman, I have put everything I can on pause, I cannot ask anyone for help or turn to my parents, the three of us have to be at home. At least I am lucky enough to be able to organize myself,” she says. It has come to have 10% of its staff confined. Positive cases, close contacts, with symptoms but without confirmation, with antigens but without PCR, with confined children... "As an employer, they have placed a responsibility on us that does not correspond to us. Logically, what you do is send these people home, although be without formal leave".

The reduction of the working day without reducing salary is a formula that is gaining strength in some places, but in Spain, Álvarez believes, teleworking is serving as an excuse not to face this and other debates on conciliation and care. "Furthermore, if employers understand that telecommuting is to work at half throttle, they won't want to keep that either."

Sociologist Sara Moreno emphasizes that talking about conciliation seems to automatically mean talking or thinking about women. "The problem is the lack of co-responsibility. We wouldn't have so many problems if, for example, there was a better distribution of domestic and care work, and if a couple had responsibility and resignations shared 50%," he says. Moreno insists on the negative gender impact of the current situation and also of teleworking as the only option, and is committed to thinking about short-term policies, such as paid leave, to face this crisis, and then act in the medium and long term.

The current situation also has important class biases. "There are those who can not afford or be absent for a day because they are out of work," he recalls. In many jobs, telecommuting is simply not an option.

Maria, a worker with a nine-month-old son, sums up her current situation: "My baby tested positive on Friday, I was looking forward to being positive before Monday because it was the only solution. On Monday I finally tested positive and I was discharged. A baby After nine months with COVID, he cannot take care of himself, nor can I leave him with anyone. Although it seems crazy, sometimes getting infected is the only option."

Tags: alone, baby, Could, give, ill, Kids, Needed, no, no one, positive, take care