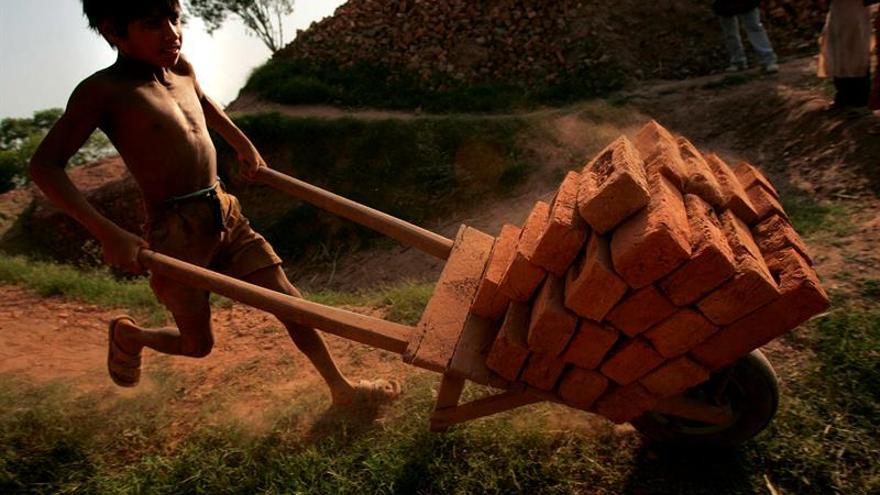 Today there are more boys and girls working in the world than four years ago. One in ten minors, a total of 160 million children worldwide, according to the first joint study of the International Labor Organization (ILO) and UNICEF, with data from 2020. In addition, this last year of coronavirus pandemic even the problem will increase, warn the organisms, given the situation in many countries. The United Nations agencies have sounded all alarms at what represents the first setback in the reduction of child labor in the world in the last two decades, the moment when the ILO began to periodically measure its incidence.

Child labor is not a minor issue. Children face physical and mental risks at a young age, which condition their development. It is more widespread among boys than among girls and has a higher incidence in rural versus urban regions. “Child labor undermines children’s education, restricts their rights and limits their opportunities in the future, and leads to vicious intergenerational cycles of poverty and child labor,” underlines the report published this Thursday, shortly before World Anti-Childhood Day. child labor, this June 12.

“The new estimates are a wake-up call. We cannot stand by while putting a new generation of children at risk, ”says Guy Ryder, ILO Director-General. “We urge governments and international development banks to prioritize investments in programs that enable children to exit the workforce and return to school, as well as in social protection programs that facilitate that work for women. families “, claims Henrietta Fore, executive director of Unicef.

Children work mainly in the family environment, whether in the fields or in small family businesses, a situation closely linked to poverty and the lack of educational opportunities. It is not an image that is so far away in Spain. The last generations of old men and women, so resentful during the pandemic, remind the following, many grandchildren, what it was like to work in the fields to put food on the table. How they left school in many cases without knowing how to read and write well, as evidenced by their slow and shaky handwriting signatures.

Child labor that is not so alien

The global image of the increase in child labor hides territorial differences. The increases are concentrated in Africa, which has gone from having 72 million children working in 2016 to 92 million, as well as the Arab States, which have doubled in number (from 1.2 million to 2.4 million children), and lastly, the area of ​​Europe and Central Asia, which reached 8.3 million last year compared to the 5.5 million children affected by child labor in 2016.

On the other hand, other areas have managed to reduce this scourge that conditions the opportunities for minors present and future. This is the case of Asia and the Pacific, with 48.7 million children working compared to 62.1 million four years ago, and Latin America and the Caribbean, which have subtracted just over two million minors working, up 8.2 million in 2020.

As can be seen from the figures, children in Africa are the most affected. “Currently, there are more children in child labor in Sub-Saharan Africa than in the rest of the world,” the report highlights. There, almost one in four minors is affected by this situation. A problem that may seem far away, here in Spain, but it is not so far away.

The ILO and Unicef ​​study warns that “more than 70% of children in child labor (112 million) are engaged in agriculture.” In a globalized world, where for example the chocolate, coffee and fruit that we consume many times come from the other side of the globe, child labor of a minor on a cocoa plantation in Ivory Coast it may not be that far from our shopping cart.

“A large part of the products that we consume regularly hide child labor exploitation,” they remind elDiario.es from the Fair Trade Coordinator, which these days promotes products free of child labor, a commitment of all organizations that produce fair trade. “Fair Trade organizations are working on different advocacy initiatives to achieve laws that oblige multinational companies to guarantee human rights, including the absence of child labor exploitation and the protection of the environment throughout the entire chain. of production anywhere in the world “, they explain from the Spanish coordinator.

The study by the ILO and Unicef ​​also highlights that a total of 79 million children, almost half of all children in child labor, “performed dangerous work that directly endangered their health, safety and moral development.” United Nations agencies stress that child labor in families “is often dangerous, despite the widespread perception that the family offers a safer work environment.”

This is the current image of child labor, but it is not an inevitable image, as seen in countries that have made progress and continue to do so. There are recipes that work, such as investment in education, decent work for adults and greater security in international production chains.

“The elimination of child labor is too big a company to be solved by one party alone,” warns the report by the ILO and Unicef, which ask that “countries should join forces in the spirit of Article 8 of Convention 182 of the ILO “, on the prohibition of the worst forms of child labor,” universally ratified “. Countries, such as Spain, have also committed to this in numerous international agreements, such as the 2030 Agenda, which aims to end child labor by 2025.