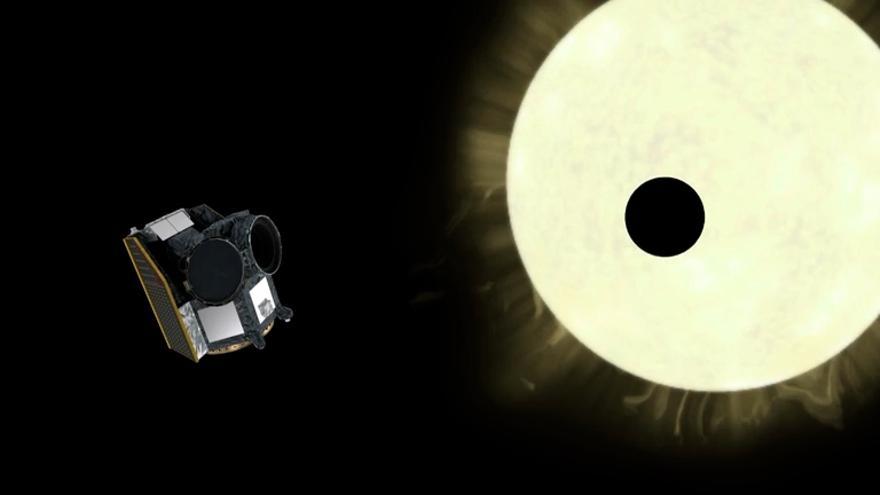 Good pretty and cheap. Or rather: good, useful and cheap. But we are not in a flea market. These are the three attributes that define the Cheops satellite, the main protagonist of a mission of the European Space Agency (ESA) that was manufactured in Airbus Spain and that has the ambitious mission of breaking the barriers of the solar system and investigating in depth the composition and the characteristics of the planets that orbit around stars other than our own, the Sun. In other words, the mission, which turns one year old this Christmas, is going to try to discover how – and what – exoplanets are made of. Be careful, he is not going to deal with finding new planetary bodies, but unraveling all the mysteries that exoplanets that are already known today treasure. In the words of Carlos Corral, the main systems engineer of the Cheops Project, the telescope that contains the satellite is designed to obtain a series of data that have to do with the measurements of said planetary bodies and their orbital period, among other physical characteristics. In addition, it is one of the cheapest missions of the ESA, which does not mean that it is less important. On the contrary: the Cheops mission aims to put Europa on the same level as NASA in the investigation of bodies found in the ‘outer walls’ of the solar system.

Today, researchers already know of the existence of 4,000 exoplanets, although Cheops is focusing on scrutinizing only 500 of them endlessly. The mission is scheduled to last three and a half years since its launch on December 18. “The telescope can measure with great precision the brightness of the stars at which it points,” Tercia Corral. And with that spectacular precision it has the ability to “detect the very slight decrease in brightness that occurs when a planet in its orbit passes in front of the star.” This process is called transit and one of the powers of Cheops is precisely to measure it in order to find out the radius of these exoplanets, an essential piece of information to determine their composition. Although it is not that easy. The main engineer of the project points out that “by crossing the dimension of that radius with the mass” –which, in many cases, is known from previous observations– “it is possible to obtain as a result the composition of the planetary bodies, as well as information on their internal structure”. Behold the greatness of Cheops.

Until today, NASA had the lead in expeditions beyond the confines of the solar system, but the European Agency scores many points with this mission and, in addition, good price. Cheap. “From a very tight budget”, as Corral explains. “Furthermore,” he continues, “it has developed rapidly, basing its construction on components and experiences that had already been tested at ESA before.” All this recycling – in the best sense of the word – has reduced the costs of the appliance, the size of a conventional appliance. All in all, Cheops shows that, in the end, the technological vanguard can be low cost.

Spain and Switzerland, hand in hand

A total of eleven ESA member countries participate in the project, although with special involvement from the Swiss Government and the Swiss Space Office. However, the hands that manufactured and molded it until it was ready to travel to French Guiana, from where it would be launched into outer space, were Spanish. And a large part of the direction of the operation – since it was launched into orbit – is carried out from Torrejón de Ardoz. “Research is one more manifestation of an essential trait of the human species, which is our curiosity,” says Corrales. “It is our desire to explore and understand the unknown.” However, his statements take on special relevance when dealing with a space investigation. “In the more than 60 years that we have been exploring space, technological advances have been numerous and have made it possible to transform many sectors of economic activity, such as communications, transportation or energy.” On the other hand, we must not lose sight of the fact that looking outside often serves to understand what is inside. This is the case of the Cheops mission. Understanding how exoplanets are composed can be instrumental in understanding some of the mysteries that Earth still harbors.

Good, useful and cheap, the mission with Spanish DNA promises discoveries in one of the most unknown fields in the universe. As a kind of joke in history, the project looks –except for a couple of spellings– the same name as Pharaoh Khufu… and it even suits that Egyptian leader. It is, in a way, a facelift to his image, tainted by the very serious accusation of Herodotus, who blamed him for having prostituted his own daughter in order to achieve the necessary budget to build the great pyramid of Giza. Historians, however, seem clear that Herodotus gave too much credence to the version of the enemies of the pharaoh. Be that as it may, the Cheops mission may bring some renewed prestige to its name, especially if, in the three years that still lie ahead, ESA writes in the history books some of those findings that go down to posterity, just as as did the pyramid (and the black legend) of Pharaoh Khufu.

“To unify the center-right vote, you have to vote for the PP”