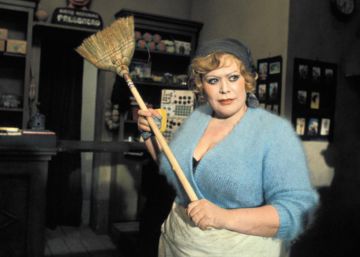 Chenoa commented the other day in BE how happy he was to be sworn in Your face is familiar to me. Among the reasons for pride, he pointed out that you can leave the TV on while your children watch the program and leave without fear of anything on the screen that the children cannot see. A praise of whiteness celebrated, I suppose, at the AMPAS meetings.

Your face is familiar to me It is therefore the opposite of Joker, with that rumor that thousands of parents have taken their children and had to take them out of the room by covering their eyes in the second scene, with the trauma already formed in those tender brains. Look Warner herself issued a statement in which he warned that the film of Joker It was a movie, which I want to warn. Well, not for those. Those children of poorly informed parents are not rescued even the entire season of Your face is familiar to me with double ration of chenoa chascarrillos.

For my therapy sessions I keep a cathodic memory that still feeds me nightmares. My parents believed that the rhombus was national Catholic propaganda and that nothing that came on TV could affect me in any way. That is only the TV, idiot, they told me, in the same didactic spirit as the Warner releases. So, one night I found myself watching the scene of the tobacconist of Amarcord who shouts: "I said you suck, not blow!" That giant tit has persecuted me since then, causing me suffocation, arrhythmia and sweating.

When Chenoa praises the whiteness of his show, in fact, he is saying: watch TV quietly, that no Fellini character takes a chest. But, from my trauma, I wonder: is it worth watching a TV without ponds or scares?