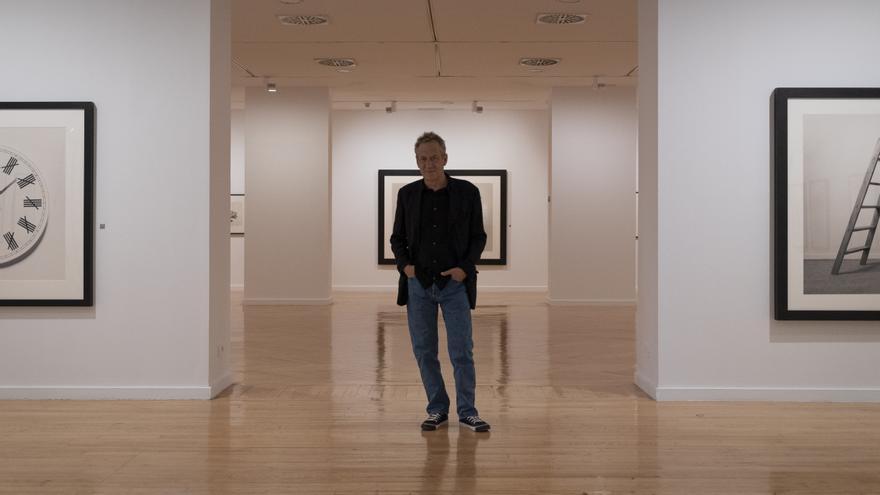 Chema Madoz is not (only) a photographer. He is an artist who uses the camera as the tool with which to communicate his work. The Madrid photographer sculpts dreamlike images that do not require a title to ask questions. "I have always had art or image as an exercise in communication," he explains to elDiario.es minutes before the opening of the exhibition dedicated to him by the Círculo de Bellas Artes de Madrid. "You never know to what extent you get it but I think that an image has to defend itself."

Madoz (Madrid, 1958) creates useless objects with which he generates an impulse among the people who look at them. In the mid-eighties he began to exhibit his works. Then he used the human figure in a way that was completely removed from the traditional portrait. His gaze went to the world of things, of the objects created by himself that are portrayed by means of his medium format analog camera.

In 2000, he received the National Photography Award, was recognized as Outstanding Author at the Houston Fotofest Biennial, and took his work to France and Japan. Until now, Madoz's conceptual photography was mainly known inside and outside our borders for its satirical tone. However, the artist inaugurates Cruelty, an exhibition that collects the most terrifying face of his work.

Reading this look at Madoz's art is not new. These 73 black and white photographs that are exhibited in the Circle until November 21 are mostly a selection of the artist's work. Part of the images were already known to the public. In fact, some of them were exhibited in April this year at the Elvira González gallery in Madrid.

On Cruelty, Madoz He is less kind but still is. "This slightly darker part is more evident, if it can be called that, but it coexists [con la amabilidad]", he points out. The idea for this line came to the artist six years ago thanks to the impulse of Juan Barja and Patxi Lanceros, curators of the exhibition. It is internationally known that Madoz's photographs are never titled. However, in this exhibition, Each image is accompanied by a QR code that virtually links to a series of texts and quotes by various authors. This idea, novel in the artist's work, of complementing photography with textuality comes from the hand of Oliva María Rubio and the curators of Cruelty. The result of this synergy is the homonymous book published by La Fábrica y el Círculo.

Although the visual artist seeks to dispense with texts, some of his images in which he has exposed words are recognized. For instance, Cruelty consists of a photograph in which the personal pronoun can be read your with a razor as an accent. "You have to establish that link with the person who comes to this room. Sometimes you get it and sometimes you don't," says the author.

"Photography for me means discovering something of which, until that moment, I was not aware, I sensed that there was something there that was different, that had nothing to do with the notion of useful, of using the object for what it was created" , says Chema Madoz.

Cruelty it is a selection from the darker side of the photographer. It has several recently created works, some iconic - such as the human skull with a circular saw as a quixotic basin - and images from its first stage. This period less known by the public, and even less imitated by people who seek to shoot with their conceptual gaze, is formed by frames that do use the human being as part of their work. "When the human figure was used, I think it was also in an objectual way, they were like figures in which pieces appear or the expression does not appear. I think that over time pushed me to dispense with them and see what I could tell. from the moment in which the people did not appear ", analyzes the creator.

Madoz's visual poetry made through the manipulation of everyday belongings has a brilliant lateral thought widely used in the world of advertising and the marketing. For this reason, on various occasions some brands have requested the collaboration of the artist. Although this has been "with a dropper, in special things", according to Madoz. "In advertising there are many people involved. It is not particularly attractive for me to go around discussing why. I can make an image, if you want you can use it and if not then there is no problem; make your campaign as you prefer, but I I see it differently, "he adds.