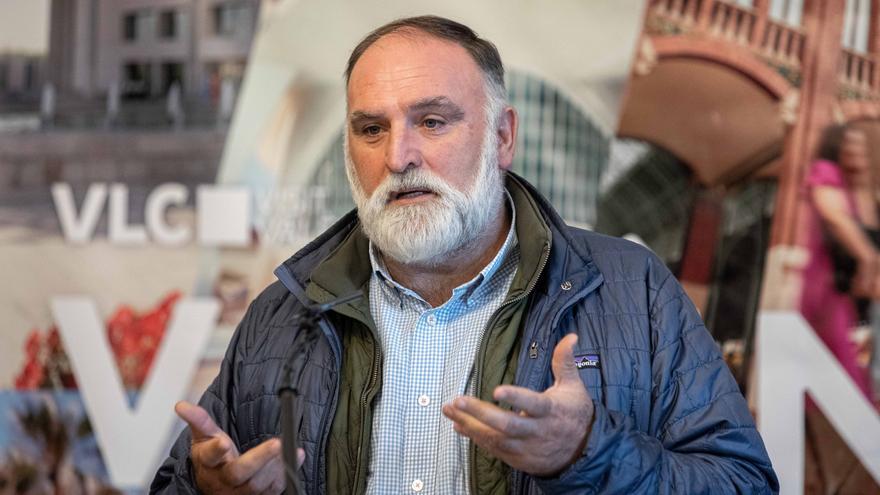 After training at the Barcelona School of Catering and Hospitality, José Andrés (Mieres, 1969) joined the mythical restaurant “El Bulli” in 1985 together with Ferrán Adriá, one of the chefs who has influenced him the most and with whom since 2019 shares in New York the Little Spain Market, a large culinary space of 3,000 square meters. But before, after finishing his studies in 1993, he went to the United States, where he worked at the El Dorado Petit restaurant in New York, before opening the restaurant “Jaleo” in Washington, specializing in tapas cuisine.

Called the child prodigy of culinary Washington, he is considered the main exporter of Spanish cuisine to the United States, and he is responsible for the introduction of the concept of “tapa” there. Candidate on several occasions for the prestigious Outstanding Chef, the Asturian chef has received numerous awards and has also been nominated for the Nobel Peace Prize.

The World Central Kitchen organization, which has been collaborating in recent days in the distribution of food in the apartment building that collapsed in Miami (USA), has carried out aid missions to more than a dozen countries since its foundation in 2010, distributed millions of meals and gathered about 45,000 volunteers.

With this project, he traveled to Oakland (California) in March 2020 to provide meals to the passengers of the Grand Princess cruise ship, quarantined by covid-19, and, for the same reason, his solidarity kitchen participated in Spain then to help families Madrilenians in vulnerable situations.

In addition, last May he announced the creation in Madrid of the WCK European training center for professional chefs to respond immediately to the food needs of a population in case of emergency and to respond in Europe and North Africa.

Adoptive son of Washington and since November 2013 a US citizen, the Asturian chef has conducted gastronomic outreach programs for television, he is the author of several gastronomy books, such as “Tapas”, “Los kitchen de José Andrés (2005) or” Los kitchen by José Andrés: the recipes of the chef who triumphs in Spain and the United States “(2006).

The award, which closes the eight distinctions of the XLI edition of the awards given annually by the institution that bears the title of the heir to the Crown, went to Spanish health workers in 2020 for their work at the forefront of the pandemic and, in editions Previously, the Polish city of Gdansk, the European Union or SOS Children’s Villages were distinguished, among others.

Other winners of the 2021 Princess of Asturias Awards

This year, the Scientific and Technical Research Awards have already been awarded to seven researchers who have developed some of the vaccines against covid-19; International Cooperation to the NGO Campaign for Female Education (CAMFED); Arts, to the Serbian Marina Abramovic, the greatest exponent of “performance”; and Communication and Humanities, to the American journalist and writer Gloria Steinem, icon of modern feminism.

In addition, the Social Sciences study fell on the Indian economist Amartya Sen, known for his work on the theory of social choice, human development and economic well-being; the one of Sports, in swimmer Teresa Perales, winner of 26 medals in five Paralympic Games, and that of Letters, in the French writer Emmanuel Carrère.

Each Princess of Asturias Award, which will be awarded in October in a ceremony presided over by the kings of Spain, is endowed with the reproduction of a sculpture designed by Joan Miró, an accrediting diploma, a badge and 50,000 euros.