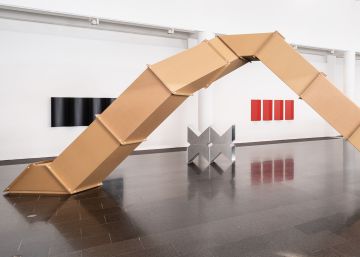 Charlotte Posenenske loved machines, gigantic bridges, dikes and highways, as follows from one of the videos she integrates Work in Progress, title of the retrospective that the Macba dedicates to this German artist, who in a few years (from 1956 to 1968) produced a work ahead of its time and, no doubt, conditioned by his biography. Posenenske began to work in full postwar period, in a country that was reborn from its rubble with light buildings and industrial finishing.

If in his first pieces, made with a spatula or adhesive tape, the mechanical gesture of his own hand is still perceived, it began to be erased in Sculptural paintings, where he sprays the paint with a spray, to disappear completely in the A series. These are arched and curved metals of a single color, which form waves or folds in space and which would later be manufactured in unlimited runs (B and C), limiting its value to the cost price and thus distorting the art market, always pending exclusivity. The main course, however, is the D series and Dw, whose modules in galvanized steel and cardboard are reminiscent of the ventilation ducts that are seen today in facades, tunnels and roofs, and that have been installed here recovering the skylights of the Macba.

Its clarity not only responds to a formal taste, very much in the line of American minimalism with which they usually associate it. It is also due to the desire to delegate the assembly and use of these modules in other hands. That of the curators, collectors and spectators themselves, a gesture that would culminate their challenge to authorship.

For its playful sense it reminds us of Play time (1967), by Jacques Tati, especially if one thinks about how bodies learn to relate in depersonalized environments. The same could be said of situationist drifts. Not surprisingly, Posenenske not only installed his pieces outside the galleries, but in somewhat marginal public spaces, such as an airstrip or a traffic islet, as seen in several photographs and in one of Gerry Schum's videos . The other documents a beautiful happening in the Dorothea Loehr gallery, where several operators are seen working. His movements are small choreographies that mock the manufacturing production systems, an issue that the artist studied thoroughly, already immersed in sociology, because what happened to Posenenske was what Lygia Clark: after a moment he stopped identifying himself as an artist. If one did it to design therapeutic objects (Bugs), the other focused on discrediting the techniques that measure productivity at work, claiming less alienating systems. Too bad that his early death made his retirement from the artistic circuit definitive, which he announced in a manifesto after Series E, that the Macba has reproduced according to some drawings. They are partitions, swinging leaves that invite us to access an unfairly forgotten production on its day.