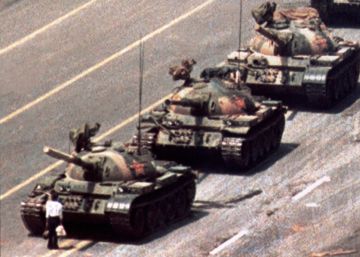 American photojournalist Charlie Cole, author of the historic photo Tank man, in which a man appears standing in front of several armored vehicles in Tiananmen Square (Beijing) during the Chinese repression of 1989, He died last week in Bali (Indonesia), the independent newspaper reported Friday South China Morning Post (SCMP). Cole, 64 and a resident of Bali for 15 years, was one of the cameramen who They took pictures of the scene from the balcony of a Beijing hotel: he and his famous photo won the 1989 World Press Photo thanks to the framing of his image.

In the snapshot, which went around the world and became one of the most iconic photos of the last century, a man planted in front of an armored column appears on the Peking Avenue of Chang'An, as an individual protest, after Hundreds of young people died in the square hours before. It is estimated that more than 1,000 people died during the repression of the Tiananmen student protests in May 1989. In an interview with the Efe agency conducted a decade ago, Cole explained that he took the picture with a Nikon camera and a 300 mm lens, "from a balcony that was far away, about 200 meters from the scene, from the room Stuart Franklin, on the eighth floor of the hotel. "

After having dispersed the people who had returned to the square that morning, a column of 25 tanks advanced along the avenue. "Out of nowhere that young man appeared, with a jacket in one hand and a bag in the other, and stood in front of the tanks. I couldn't believe it. But I kept shooting convinced that they were going to kill him. To my amazement, the tank it stopped, "the photographer explained. Then, anticipating the police, who last night assaulted him with an electric pickaxe at the hotel reception, hid the reels in the toilet tank.

Born in Bonham (Texas, USA), Cole graduated in journalism at the University of Texas at Denton in 1978 and, thanks to his father's military profession, his work was frequently linked to the army, covering conflicts such as the uprising of the people Filipino in 1985 or the South Korean student demonstrations in the mid-eighties. After a traffic accident, his leg was shattered and he ended up changing his profession for commercial photography.

Last June, 30 years after the Tiananmen massacre took place, lat night from June 3 to 4, 1989. On orders from the Chinese Communist Party, the tanks charged against the people to dissolve the demonstrations that, initiated by university students, they claimed for two months, in the main square of Beijing and in other Chinese cities, freedom of expression, measures against corruption and, in the end, democracy.

The number of victims is still unknown, and the calculations range from hundreds to about 10,000. A complete list has never been published. The CCP has never admitted responsibilities. Instead of explanations, the official silence spreads. Many young Chinese today have only a vague idea or totally ignore what happened. The generations that do remember it keep a lot of mentioning it in public. In fact, until today, the identity and destiny of the man known as tank man are still unclear, and the image remains blocked in censored Chinese networks.

Another character known for his role in Tiananmen, former Chinese Prime Minister Li Peng, also died last July, who held this position from 1989 to 1998 and is known to have been politically responsible for the violent repression of student protests in Tiananmen. His involvement in the killing made him famous abroad as "the butcher of Tiananmen".

The Temporada Alta festival is consolidated in Buenos Aires

The funeral secrets of the Neanderthals of the “flower burial”