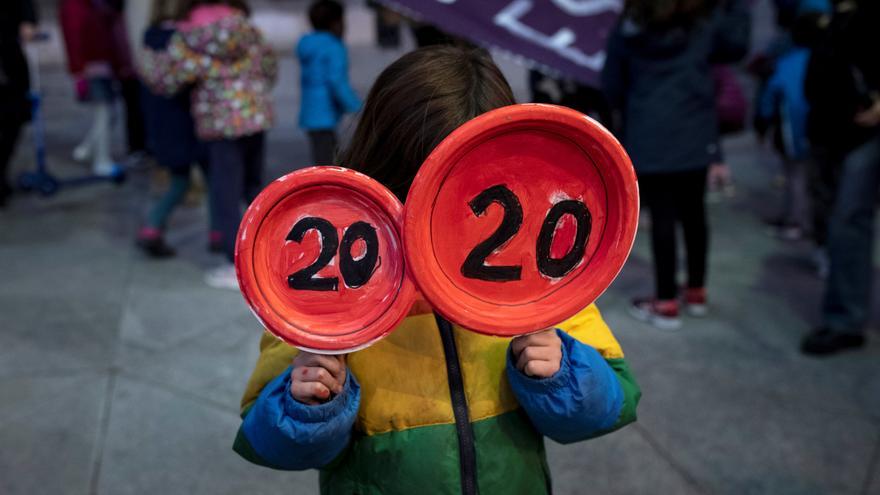 The accidental death of six-year-old little Maria last Thursday in Madrid At the door of his school he has put in the forefront a debate that had already been gaining strength in recent months among the neighbors: the surroundings of some schools are a chaos of cars in the hours of entry and exit, despite the fact that in general those who go to schools in a private vehicle are a minority. But double and triple rows are a reality. And not only in the big cities.

The movement School revolt has been campaigning for months to pacify around educational centers, with protests pointing out the danger posed by the concentration of vehicles, but also the high levels of pollution they cause. Thursday’s accident, unusual but not the first, confirmed the worst omens of this movement, which Friday he dyed his usual protests black.

“The main reason for the School Riot is the implicit risk for girls and boys in school environments due to the presence of motorized vehicles. In addition, the increasing number and size of these multiplies the risks, both due to run-ins and accidents. in general, such as the levels of contamination that are generated, “they recalled on Friday.

The “increasing number” of cars is likely to have no scientific backing, although intuition could lead one to think that the implementation of the single district in Madrid, for which the main criterion for awarding the school is no longer proximity, has caused an increase. What is known is that getting to schools by private vehicle is not the majority option.

“In the schools in the center we talk about figures [de uso del vehículo privado para llegar al colegio] of 5%, but then you see the distribution of the space, to that 5% we dedicate 80% or 90% of the space “, laments Álvaro Fernández Heredia, mobility expert,” with all the connotations that this has, also pedagogical, when we teach the children that we reserve the city for a minority. “

The use of the car is a minority, but it also depends a lot on the area in which the educational center is located. Thus, according to the 2018 Home Mobility Survey of the Madrid Transport Consortium, in Mirasierra, the area in which the Montealto school is located, where the fatal accident occurred and which is an affluent area with large avenues, 26% of journeys are made by car for the purpose of “studies”, while 31% are on foot and the remaining 43% are by public transport. However, in Lavapiés, a popular downtown neighborhood with small streets and restricted to traffic, only 3% of trips are by car. The opposite example – a wealthy suburban district – does reflect a majority use of the car as the preferred method of transportation: two out of every three trips in Aravaca are made by car, as explained in this analysis by the mobility consultant of the Berlin Mobility Institute Miguel Álvarez.

In Catalonia, the cradle of the school revolt that has spread to other cities, the mobility survey returns similar results. They are thick because all “studies” fall into the same category, but only 19.4% of students claim to go by private vehicle to their place of study, while 35.8% do so in non-motorized methods and almost half by public transport.

Another issue that the School Riot usually draws attention to is that, apart from the volume of cars, in general the speed limits around schools are not respected. A Mapfre study, carried out from real measurements in school environments, estimated the percentage of offenders in this regard at 74%, and one in six exceeded the limit by 16 kilometers per hour or more.

Respect for the rules goes through cities. Going down to the breakdown, in Ávila all the vehicles analyzed exceeded the limit around the schools, in Madrid the offenders were 90% and in Córdoba, 60%.

Causality or correlation, school environments are the focus of abuses against children under 14 years of age, at least in Madrid, giving more arguments to the School Revolt. An analysis of the accident data of the City Council carried out for the web Cycling through Madrid indicates that one in six adolescents who has suffered a run over he has done it in the environment of a school center. In other words, they explain from the portal, 1% of the road (the streets around schools and institutes) concentrate 17% of accidents involving children under 14 years of age. “It is the logical consequence of concentrating dangerous machinery and a multitude of children in a reduced space at the same times”, they value.

The counterpart of this statistic is that “by restricting traffic in a small part of the road to very specific hours, the benefit for the safety of minors is multiplied exponentially”. This is what Revuelta Escolar has been claiming and, recalls Fernández Heredia, is what the municipal ordinance of Madrid says in its article 10.

“Minors, the elderly, dependent people, people with disabilities and people with reduced mobility will be especially protected, and protection measures will be taken in particular in terms of road design, signaling and the control of road discipline in the spaces and roads that they use around kindergartens, schools, senior centers, hospitals, health centers and other services used especially by them “, says the first point of the aforementioned article.

Heredia explains that in the school in the center of Madrid to which he takes his children, during the pandemic it was requested to use the sidewalk in front to expand the space in the surroundings and gain security space. Three requests, three negative. “It was approved with the support of all the groups, but a year has passed and nothing has been done,” he laments. “If they are not going to comply with their own ordinance, that they remove it from there,” he asks while recalling that the same parking lot that was denied to them was yielded to bars to install terraces.

Examples that pacifying school environments is possible there are. In Gijón, explains Fernández Heredia, the pedestrian areas around many schools have been expanded. Pontevedra, an example of a pedestrianized city, has several routes from known as school road, an initiative for the little ones to walk to school (ideally alone). Barcelona has also announced that it will carry out 66 performances this year to pacify school environments. There are also anecdotal cases in Madrid.

Outside our borders there are also perhaps more complete examples. In London, the British version of the school revolt has managed to get almost 500 schools to prohibit reaching them by car with the approval of the authorities. The gesture has meant a 23% reduction in nitrogen dioxide levels (NO2) in the areas where the schools and their surroundings are located.

In Madrid, Fernández Heredia laments, “there is a kind of generalized pardon” to park in any way around the schools. “Nobody thinks of leaving the car on the sidewalk anywhere else, but in schools, yes,” he explains while recalling that when he was manager of the Municipal Transport Company, “people wrote to us asking that the stop be moved. of the bus, which bothered because it was right at the door of the school “.