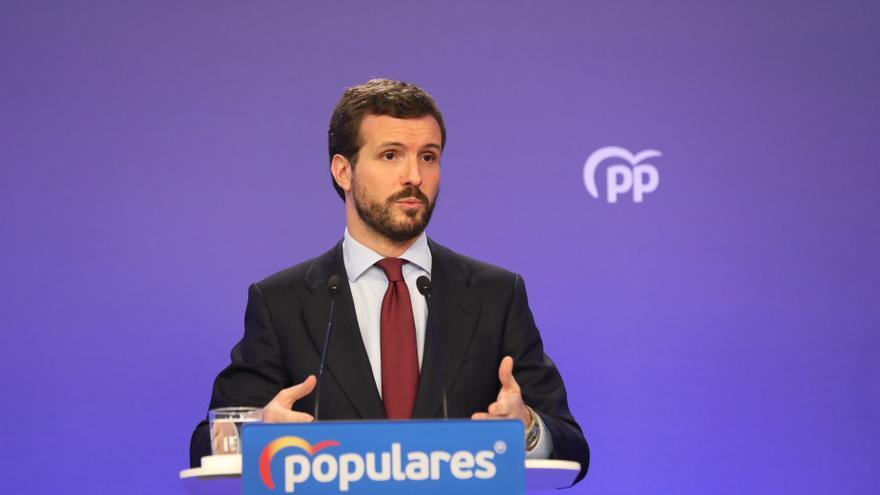 The alleged “turn to the center” that Pablo Casado has just undertaken for the umpteenth time, with the renewal of a part of the party leadership and the removal of Cayetana Álvarez de Toledo as parliamentary spokespersonhas been greeted with a mixture of expectation and skepticism by the other groups in Congress. Especially on the part of the PSOE, where they hope that it is not a mere facelift and that in the coming months they can start negotiations with this new PP to carry out the General State Budgets of 2021, very necessary for reconstruction after the pandemic, especially after the agreement reached in the European Union and which seeks a solution to the crisis radically different from the one undertaken after the financial crash of 2008.

The President of the Government, Pedro Sánchez, knows that he has a very complicated challenge before him but he does not renounce to seek the greatest possible consensus to carry out those accounts despite the warnings of his partners and opposing allies against the temptation to “agree with the rights.” .

In its harsh dismissal after being dismissed by whoever was her mentor, Álvarez de Toledo slipped that his fall also had to do with the beginning of the budget negotiation at the turn of the summer and other state pacts, such as that of Justice. According to the version of who was the parliamentary spokesperson during the last year – denied this Tuesday by Casado – the head of the opposition would be willing to reach an agreement with the President of the Government to distribute the General Council of the Judiciary (CGPJ), which is in office since December 2018 and has since maintained a conservative majority composition inherited from the stage in which the PP ruled with an absolute majority.

Next Thursday the National Board of Directors -which will be telematic- will ratify Cuca Gamarra, the mayor of Logroño, as parliamentary spokesperson, replacing Álvarez de Toledo, while the mayor of Madrid, José Luis Martínez Almeida, will be officially the national spokesperson for the PP, a newly created position. In addition, the former president of the Congress, Ana Pastor, a recognized Marianist, will become Vice Secretary of Social Policy. Both Gamarra and Pastor will from now on be two important pillars for Casado in Congress in the face of the political course that is now beginning.

The first important appointment where it will be possible to appreciate and visualize if there really is a change of tone in the PP will be the Vox motion of censure —As yet unregistered and without a date for discussion— an initiative that Casado refused to support as soon as Santiago Abascal announced it. The strategy of the far-right leader found a quick response from Genoa, the national headquarters of the PP, where they rushed to warn him that will not count on them to “save soldier Sánchez” with an initiative doomed in advance to failure.

However, Casado’s apparent desire to stage a new, more “focused and moderate” stage, as some of the party’s barons have been demanding of him – such as the Galician Núñez Feijóo and the Andalusian Juan Manuel Moreno – does not include the rupture of the agreements that the conservative formation maintains with the extreme right of Abascal with which, despite not supporting its censorship against Sánchez, it agrees in many of its proposals, as it has shown throughout this long health crisis.

In fact, those of Casado depend on Vox in several autonomies and important municipalities, including the capital of Spain. In Andalusia, the PP of Juan Manuel Moreno, one of the barons framed in the ‘moderate’ sector of the party, maintains the pact with Vox, an agreement that they had to close to two bands to be able to govern in the Board with Citizens, whose leaders were dodging the photo for the entire time that the negotiations lasted.

The same situation is maintained in Murcia where Vox conditions with its votes any proposal from the bipartisan government of the PP and Citizens chaired by Fernando López-Miras. Few there forget the controversy over the so-called ‘parental pin’, that defended the ultra-rightist formation, a measure that was finally approved to be able to carry out the regional budgets.

In the Community of Madrid, the complicated cohabitation that they have with those of Arrimadas also depends on the designs of Vox to which both formations have to make constant winks so they don’t get dropped.

Beyond these three major agreements, after the May 2019 elections, the PP also closed pacts and alliances with Vox in important municipalities. In Madrid, in three of those with the highest per capita income: Majadahonda, where both parties govern in coalition; and Pozuelo and Las Rozas, where the extreme right supports them. Both parties have also agreed in some Andalusian towns such as Algeciras (Cádiz) and Nerja (Málaga). Or in Roquetas de Mar and El Ejido (Almería), where they form a coalition government, although in the latter municipality they have ended up breaking the pact. In Almería capital the PP also remains in the City Council thanks to the councilors of Vox.

This collusion with the extreme right, which the PP has never opposed arguing that Abascal’s is a “constitutionalist” party, has cost Casado harsh reproaches from the PSOE and other parties in Congress. Own Pedro Sánchez has blamed him for that mimicry with Abascal’s party. “He portrays himself in his opposition strategy, following Mr. Abascal and the far right. That will be his responsibility, he will make his party smaller and the far right bigger,” he warned him last June. “If you speak like Vox, act like Vox and vote what Vox does, we can infer that, if it is not the same, it begins to seem the same as the far right. And that is a problem for Spanish democracy, ”Sánchez snapped in another of his parliamentary clashes.

The tense relations that the Prime Minister and the head of the opposition have maintained and maintain have not, however, prevented both parties from opening up to negotiate the renewal of some of the institutional bodies that have been in an interim situation for months. One of these agreements affects the governing body of judges, the General Council of the Judiciary (CGPJ). According to El Mundo published in early August, Sánchez and Casado have held “secret” conversations this summer to negotiate the distribution of their members. The PP wants 10 councilors and another 10 for the PSOE but the Socialists demand 11 to be able to give two: one to Podemos and another to the PNV. Citizens and Vox have charged against the two major parties for considering the agreement a “trade” and an “indecent trading card.”

Inés Arrimadas, who has just started working after several months of maternity leave, criticized the agreement a few days ago on her Twitter profile. “The old parties that do not reach state agreements to undertake other necessary reforms, it is perfectly understood to divide the judges. And in the middle of the pandemic ”, she denounced.

Meanwhile, Sánchez has appealed to the “responsibility” of the PP as the main opposition party so that it does not block and open to negotiate the accounts for 2021, which are urgent to face the tremendous economic and social consequences of COVID-19. Or at least to appear as responsible for failure if the conversations fall on deaf ears.

It already happened during the state of alarm, against which the PP voted against when it depended on him to limit mobility between territories. What Casado will do after amending himself on the second anniversary of his arrival as president of the party is anyone’s guess. For now, he has decided to change the faces of his project for more friendly ones. On whether this supposed turn of the PP can be combined with pacts with the extreme right, no one has spoken in the party, which needs the support of Vox to guarantee control of institutions where it has ruled for the last decades, such as the Community of Madrid, Castilla y León -where they are not needed- or Murcia.