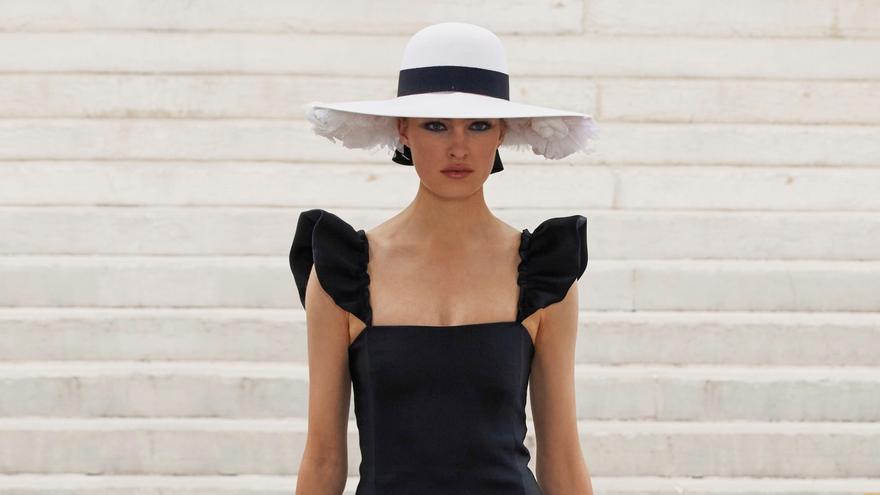 Paris, Jul 6 (EFE) .- Like taking a look at a painting by Édouard Manet. This is how the autumn-winter Haute Couture collection that Chanel presented at Paris Fashion Week was this Tuesday, in a palette of pastel and white tones, loaded with bows and puffy skirts.

“When I discovered the images of Gabrielle Chanel dressed in black and white in dresses in the style of the 1880s, I thought of the paintings,” said the creative director of the firm, Virginie Viard, in a statement after the show.

With this collection, Chanel returned to the catwalk in person for the first time in a year, with a parade with a very small capacity inside the Palais Galliera, the fashion museum of the French capital in whose recent renovation the brand has been a patron.

The arcades and neo-Renaissance staircases of this white mansion, located near the Champs-Elysées, served as the setting for the firm, forced to leave behind its beloved Grand Palais, where it usually displays its creations, closed for works until 2024.

Nothing that can scare the powerful French brand that, like so many in the city of fashion, has had to adapt in the last year and a half to the discomforts derived from the pandemic and that will finally leave some positive changes.

The collection fitted well into the white walls of the palace, recreating the poetic and wintry atmosphere sought after by Viard, who was inspired by the paintings of Berthe Morisot, Marie Laurencin and Édouard Manet.

The woolen tweed jackets, worked with bead inlays and hand embroidery, were worn short, with rounded shoulders, puffed and very marked at the waist.

The long skirts, decorated with feathers and with lots of volume, recover the bulky structure of the crinolines, which also round out the shapes at the hips.

The retro jackets were accompanied with midi skirts or masculine pants, very fluid in the lower part, but also with daring corsets as tops.

The shades of gray and white were the kings of this runway, although it was enlivened by some touches of bougainvillea, mint green, lilac and yellow.

However, the clearest bet of the house was the combination of black and white that gives a renewed graphic style to garments inspired by the 19th century.

A ruffled blouse with a Bardot neckline combined with a long feather skirt or a striking black satin dress with a square neckline and whose skirt peeks out the white of the lingerie skirt were some of the most outstanding “looks”.

“I was also inspired by English gardens. I like to mix a touch of the English style with a very French style. It’s like combining the masculine and the feminine, which is what I have done in this collection as well. That twist is part of who I am. me, “Viard added.

The gardens were seen in the embroidery, especially cared for, with flowers reproduced in three dimensions on the dresses and floral prints based on sequins on skirts and dresses.

The firm, historically linked to cinema, also gave this line a dramatic point with the collaboration it presented with the Swedish photographer Mikael Jansson, who used black and white to emphasize the colors chosen by Viard, and the filmmaker Sofia Coppola, who directed the video of the collection.

The show was closed by a minimalist ivory wedding dress, with puffed shoulders, a low back and a short train, worn by actress Marguerite Qualley, the brand’s ambassador and also the star of the Coppola video.