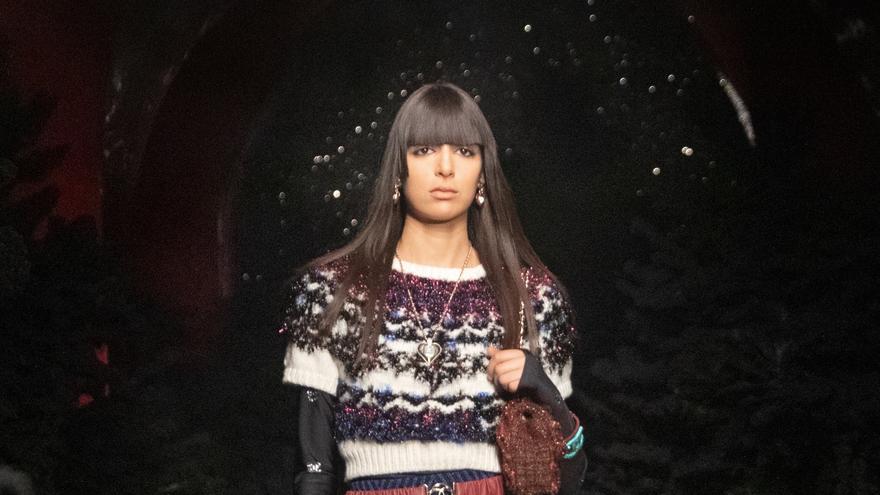 Paris, Mar 9 (EFE) .- “A winter in Paris in which opposites attract”: this is how Chanel defined the collection that it revealed this Tuesday at Paris Fashion Week, where it recovered its most well-known codes, such as black and white or the contrast of textures, with a mountaineering point.

In the absence of a catwalk, since all the parades of this edition are held virtually due to the pandemic, the firm resorted to one of the best-known streets of the Parisian night, Rue Princesse, in the central district of Odéon, where its models they snuck into a clandestine party at the famous private club Castel.

A nostalgic nod to fun and nightlife that in France has been canceled for a whole year due to restrictions to curb the coronavirus.

Shot by the Dutch duo Inez & Vinoodh, who have been at the forefront of campaign photography since the death of designer Karl Lagerfeld in 2019, the models wore wide-cut tweed tailored suits and baggy military-style coats.

The key to the collection was the combination of “tweed”, the typical Scottish openwork woolen fabric, with a mix of geometric prints, metallic applications and volumes.

An imposing “kilt” type skirt is worn with a close-fitting cardigan and fur boots, while a foot-length military coat combines with a very short draped dress.

The autumn-winter 2021/2022 collection also played with the house codes, the love for skiing -as it was seen in the boots but also in the knitted sweaters with Nordic motifs and the exaggerated down jackets in coats- and the white pairing and black.

In parallel to the sensuality of men’s suits combined with corset-like tops, in black lace and close to the body, the brand introduced dresses with semi-transparent, in which a band and a pleated wool skirt are united in a translucent black tulle dress , which exposes the belly and shoulders.

The evening style alternated with other outfits that were much more youthful and with an eighties point such as bermuda jumpsuits, printed knit dresses or quilted-effect dungarees engraved with the logo of the house that become night clothes over lace shirts.

He also highlighted a black work jumpsuit printed with camellia flowers, combined with a lilac blouse and chain belt.

The black and white, essential in the brand, filled the boots, which were also worn in white and black toe (Coco Chanel’s secret to stylize the legs and hide the big feet), but above all in the outfits, where the leather, tulle, wool and silk served to create rich-looking textures.

A few touches of earth tones, aubergine, terracotta and camel added a warmer touch to the line, in a series of metallic coats but also in some fun fur jackets with matching skirt, a fun way to reinvent her “tweed” suit.

The designer, Virginie Viard, who had opted for a more minimalist Chanel in her first collections since 2019, dared on this occasion with a bolder and more abundant proposal in jewelry and accessories.

The makeup – with a smoky effect on the eyes – and the hairstyles remained natural, with some simple straightening and surf waves, when the hair was not covered by a knitted wool cap.

In the absence of celebrities, the firm had singers such as the Korean G-Dragon, the Belgian Angèle, the American Andra Day and the American actress Margaret Qualley, who participated in a video prior to the parade, disseminated on social networks, adding the point of glamor that the virtual world is leaving behind.

The Parisian catwalk closes this Wednesday, after nine days of presentations, with the virtual Louis Vuitton fashion show, which will show its proposals for next autumn-winter.