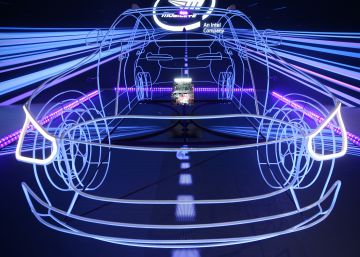 More than 100,000 attendees from 160 countries. Almost 6,000 exhibitors. Around 300 conferences. CES figures are overwhelming. The largest and most influential consumer technology fair in the world, which takes place in Las Vegas between January 7 and 10, is a prelude to the technological trends that will prevail in the coming months: from autonomous driving to 5G going through connected devices in the home or virtual reality applications. If in previous editions the devices presented were more traditional (phones, televisions, vehicles) this fair has shown that any object can be connected.

Wardrobes that fold clothes, washing machines that buy detergent or refrigerators that detect food and warn when they will expire. CES is the perfect showcase of what could become the fully intelligent home. At present, China has the highest proportion of devices connected in the home, followed from far away from the United States and Europe, according to a recent GSMA Intelligence study.

Lesley Rohrbaugh, director of market research at the CTA (the association of technology companies in the US, which organizes the CES), explained on Thursday to a group of international journalists what are the trends in different countries. In places like China and South Korea, users choose to introduce connected cameras and thermostats into the home. Meanwhile, in Europe they seek to be more ecological and energy efficient.

“In 2019 we saw how Bell presented a flying taxi. This year they are here again and they are not the only ones, ”says Rohrbaugh. In fact, other companies such as Hyundai and Uber have presented a prototype flying taxi with which they hope to revolutionize public air transport.

As for land vehicles, they are increasingly connected. Sample of it is the prototype presented by Sony packed with sensors. Some aim to facilitate autonomous driving and detect both nearby people abroad and each passenger. This year the main objective of the manufacturers, according to the CTA, will be to develop technologies that improve connectivity and vehicle safety.

In China, 58% of households have a smart TV, a remarkably high figure compared to 35% in the United States and 29% in Europe, according to the GSMA Intelligence report. In this edition the brands have focused on launching 8K TVs and with striking designs: from the screen that turns to go vertical with which Samsung intends to capture the attention of the youngest to televisions without frames.

There will also be news regarding gaming. Jim Ryan, president and CEO of Sony Interactive Entertainment, presented at the CES the PlayStation 5 logo and urged attendees to stay tuned for news in the coming months. The launch of the console is maintained by the end of the year.

Virtual and augmented reality already allow you to enjoy a concert from home, practice a heart operation without being in an operating room and create a work of art without painting on a canvas. Dozens of companies have shown devices and use cases of these immersive techniques. Rohrbaugh has highlighted the suits with dozens of sensors that, together with helmets, are able to take the user to the virtual world.

Although it remains to be seen when this type of technology has just become general, the trend is still growing. Between 2018 and 2022, an increase of almost 700% in the business that generates this technology is expected. The predictions suggest that the figure will rise from $ 27,000 million to $ 209,000 million, according to Statista.

Sleep technology has triumphed in this edition. Dozens of devices at the fair are focused on sleeping better, longer and deeper. From smart mattresses that change temperature to helmets that, according to their manufacturers, activate the brain’s natural ability to sleep well. They also highlight the smart watches and physical activity trackers. One in four adults already has one of them and the trend is expected to continue, according to GSMA Intelligence.

If something has tried to make clear some companies at the fair, it is that the general well-being of a person also goes through sexual well-being. The CTA has allowed for the first time to officially expose sexual devices. Among the devices that have caused the most fury, clitoral suckers, necklaces and vibrating rings, and male masturbators stand out.

We will still have to wait to see the massive implementation of 5G. But this technology, which promises to enable speeds up to 100 times greater than 4G, already has its first use cases. The fair has dozens of compatible devices: from devices gaming to vehicles, laptops and smartphones. There are already places like Spain, Japan, China, United Kingdom, Italy or the United States that have begun to deploy this technology.

It is expected that some Asian countries will experience remarkable progress in the coming months. For example, in China, operators are committed to extending 5G network coverage to highly populated cities in the first two years of service. And a good reception is expected. Almost 50% of Chinese consumers say they will get a 5G phone as soon as it is available, according to GSMA Intelligence. Another 20% acknowledge that they will also buy a smartphone of this type, but he doesn’t know when he will.