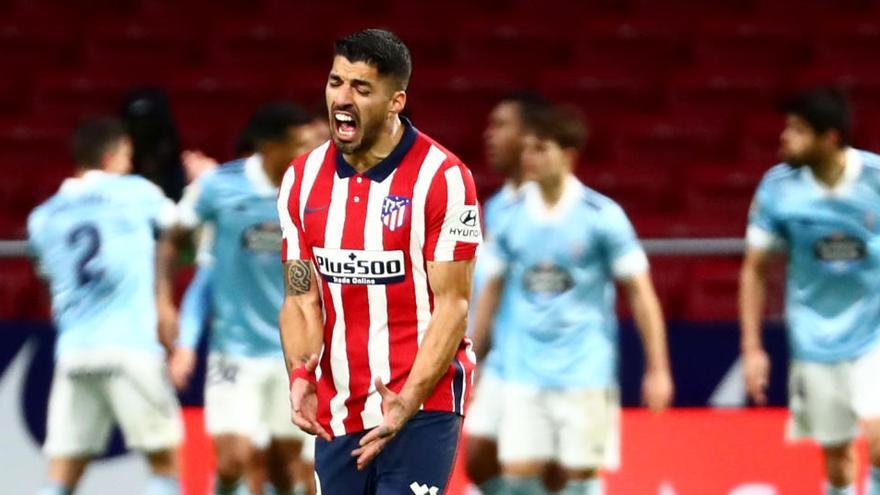 On the verge of the end, the Celtic achieved what no one had achieved in the last eight days of the League, subtracted from the Atlético de Madrid two points and appeased the punch of Luis Suarez, when the rojiblanco team already felt a triumph theirs, built by the Uruguayan scorer and frustrated by Ferreyra (2-2).

The Argentine winter signing returned to LaLiga Santander with a prominence that perhaps he did not intuit, as the last-minute and decisive scorer of the 2-2 that reduces the difference that Atlético held in the lead. It is still relevant, but not so much anymore. There are eight points over Barcelona and Real Madrid, which can still be eleven.

The staging of Celta was impressive. To the high pressure that transforms it into a daring, overwhelming and conclusive team when it develops it with the efficiency with which it did in the first half in the Wanda Metropolitano, it added good ball handling, precision and forcefulness than in others Chances he hasn’t had, because he didn’t have too many chances against Jan Oblak either.

His was the first section. Without discussion. Atlético not only minimized it, but devoured it with those mechanisms that are so visible, so inherent in Eduardo Coudet’s project, which propose him to steal the ball the closer the better to the opposing goal and that propose him for greater challenges out of ambition, like this monday.

At minute 12 he won 0-1 -and it was not at all strange- with an action that is taught in any football school as a model: the opening to the band, the good first center from the right of Hugo Mallo and the uncheck and the shot on the plate, one meter from Jan Oblak, from accurate Santi Mina between Felipe and Giménez.

There was merit for Celta in all this, in all the first half of light blue color, winner of the duel that he raised then with the pressure, but also many deficiencies in Atlético, too many for a team of his caliber, unthinkable in some players of his stature, such as Lodi or Felipe (he was changed at rest by Torreira), for example, although there were many others, with concessions that he has already slipped into some of his most recent matches, even if I win them.

There is data that describes him beyond a specific moment this Monday: three of his last four games he started with the score against and in the last ten league events, including this one, he has conceded nine goals. In the first ten, however, he only received two goals. He has hidden it with his offensive forcefulness. Leftover.

Because Celta was better, yes, all the first half, but not even such superiority was enough to go to rest in front of the scoreboard. The reason is obvious: Atlético -or specifically Luis Suárez- has tremendous efficiency in attack, play as he plays, even if he hardly appears in the rival area, he has not had any chance or the game aims at everything except the rojiblanco goal. You don’t need almost anything to score goals.

And he doesn’t need it because he has footballers who make a difference in an instant, in this case in the last play of the first act. One is Marcos Llorente, although his circumstantial right-winger position extinguishes many of his qualities. His was the perfect center for the band. And another, above all, above the rest, is Luis Suarez. His was the auction, from the ground and at the first touch. The VAR review, by millimeters, validated the tight position of the ‘9’. It was 1-1.

The draw was the best of Atlético. And the tie was the worst for Celta. And when that happens, it seems that there is no more margin in the Wanda Metropolitano. The leader of the League did not give it to him then, who emerged from the intermission to win, as he did 15 days ago against Valencia, but finally he did not get it, not even with 2-1.

Five minutes into the second half, in the next appearance of Luis Suárez. Two occasions, two goals. The second to center at the first touch of Lodi, to whom Kondogbia had given the pass before, in his athletic debut as a league starter, in which he was also key to saving the 2-2 against Iago Aspas and in which he was omnipresent in the second half in the center half.

But suddenly, On the verge of 90, Facundo Ferreyra changed the repetitive history of the last days, with the 2-2. This time it was not enough with the punch of Luis Suárez.

Incidents: Match corresponding to the twenty-second day of LaLiga Santander, played at the Wanda Metropolitano stadium without an audience.