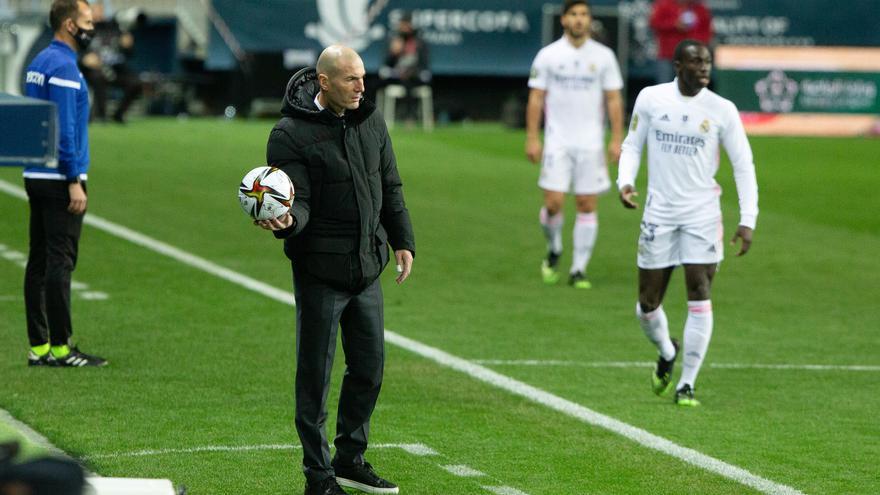 The Real Madrid, the only survivor of Spanish football in the Champions League, will try to extend your good time with a win that allows you to put more pressure on the leader Atlético de Madrid and to Barça, measuring your european hangover before a Celta Vigo who is gambling his options to continue fighting for a European place.

The team of Zinedine Zidane opens the fire between the candidates for the title in the twenty-eighth day of LaLiga Santander, with a dangerous exit but, in turn, the opportunity to extend pressure to the leader’s irregular timing and Barcelona’s visit to the Real society.

The triumph and wear against Atalanta in the Champions League, they are put to the test in Balaídos, after one of those games in which you put everything at stake and the danger of a hangover appears days later before a rested rival like Celta Against which Zidane must decide whether to keep the new formula of three centrals, repeated in his last two commitments, or return to his classic 1-4-3-3 with an offensive trident.

Based on that decision, the names of the starters will change, among which the Brazilian Casemiro returns after not being able to play in the Champions League due to suspension. The Madrid coach will still not be able to count on the injured Dani Carvajal, Álvaro Odriozola, Eden Hazard and Mariano Díaz, but the casualties have not affected the good Madrid line at a key moment of the course. He has not lost nine consecutive games since January 30, seven of them in the league, a competition in which he signed two draws against Real Sociedad and Atlético de Madrid in that streak.

If Zidane maintains three centrals, only the entry of Casemiro by Fede Valverde would emerge as a novelty. If he modifies the drawing, Nacho Fernández would go to the right side and Lucas Vázquez could advance his position to go to a trident with Karim Benzema on a scoring streak – five consecutive games scoring – and a Vinicius who earned his continuity in the eleven.

For Celta, the Argentine Eduardo Coudet recovers his eleven of gala to face a Real Madrid that has become accustomed to winning in Balaídos, where they have not lost since 2014 with Luis Enrique Martinez as a celestial coach, in addition to chaining five victories and a draw in his last six visits.

The battle in the center of the field between the Peruvian Renato Tapia, one of the sensations of LaLiga, and the Brazilian Casemiro will be one of the keys to the clash. Both are essential figures in their teams, to whom provide balance and a remarkable physical exercise, fundamental in the coverage to his companions.

Another key to the clash will be in the areas. Iago Aspas has once again been left out of Luis Enrique’s call, victim of an injury suffered in the first game of the year, precisely against the white team, who stopped him when he was better. The celestial scorer has not yet seen the door in 2021, and that bad streak contrasts with that of the Madrid benchmark in that section, Benzema.

Zidane was the first to find solutions to Coudet’s surprising game system with a single pivot -Tapia-, although neither the defeat of Valdebebas (2-0) nor the irregularity offered by his team in recent weeks will motivate a change from the Argentine, true to that 1-4-1-3-2. Only one novelty is expected with respect to the eleven he formed against Athletic, the return of captain Hugo Mallo to the right side after completing the yellow card cycle. The rest of the team will be the usual one, with Aspas and Santi Mina at the top, Brais Méndez, Denis Suárez and Nolito in the creation zone and the Araujo-Murillo duo in the center of the defensive axis.

The key: The battle in the center of the field.

The data: Real Madrid have five victories and a draw at Balaídos.

Santi Mina: “Benzema is the best forward of the moment”

Zidane: “A demanding match awaits us in Vigo against a team that plays football well”

The environment: The spirit of the Madrid squad has been relaunched after overcoming being on the edge of the precipice in the League and ‘Champions’, and now seeing themselves with options to fight for everything.