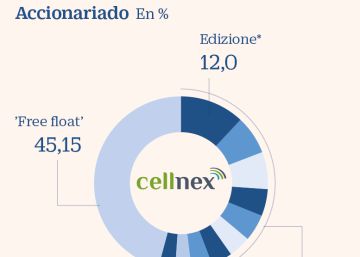 Cellnex hits the market again to the delight of its banks. He has signed 22 and will pay them, if all goes well, 121 million euros, according to the brochure of the capital increase of 7,000 million that the CNMV approved yesterday. It will issue the new shares at 36.33 euros each, with a 17.5% discount. The entities will begin the presentations to investors (road show) to load the paper.

The operation was anticipated on February 4, after announcing the purchase of 10,500 Altice telephone towers in France, the day it closed at 48 euros. Yesterday, it closed at 47.10 euros and the new shares will be sold at 36.33 euros. With 48 rights, 19 new titles can be purchased, so that the discount once the rights start trading separately, tomorrow, the discount will be around 17%. Compared to yesterday’s closing price, it would be 17.5%.

The operation, 100% insured, will have the participation of 22 banks that will guarantee that everything will go smoothly: JPMorgan, Barclays, Goldman Sachs and BNP Paribas are the coordinators, but they are escorted by 18 other entities. They are Banco Santander, CaixaBank BPI, Deutsche Bank, Morgan Stanley, Mediobanca, Société Générale, BBVA, Banco Sabadell, Credit Agricole, Intesa Sanpaolo, Mizuho Securities, MUFG, SMBC Nikko, UniCredit, ING, RBC and Natixis will roll up their sleeves to attract investors. Additionally, AZ is the company’s financial advisor.

As consideration, the entities will take up to 121 million euros, compared to the 65 that were pocketed in the capital increase for 4,000 million closed last August. So, there were 15 contracted entities.

The rights will begin trading separately from the shares tomorrow

All firms will push with different presentations throughout the planet. Either for the current shareholders to inject the money that corresponds to them so as not to lose weight (about 14.4 euros per share), or for other investors to disembark. Tobías Martínez, CEO of Cellnex, already anticipated in the 2020 results presentation that this operation represents an opportunity for new shareholders to join the group’s project.

The good news is that owners of 26.73% of the capital have already announced that they will participate with their share. GIC has agreed to subscribe 9.23% and ADIA 5.01%. Goldman Sachs, in charge of managing the rights of the Benettons, who have confirmed that they will not attend, as published by CincoDías on March 25, guarantees another 8.53%. And other investors have pledged to buy 3.95% of the new shares. They will do so in the first 10 days of the pre-emptive subscription period. Furthermore, although the commitments are not black on white, Cellnex explains in the brochure that it has information that shareholders will attend the operation with another 4.95% of the increase.

The operation is of a remarkable size. It represents 30.5% of the 22,924 million that Cellnex was worth at the close of yesterday. But the financial sources consulted trust that there will be no problem in covering it. In that of last summer, the demand reached the historical figure of 185,000 million for a total of 4,000 million euros.

Preferential subscription rights will be assigned to all Cellnex shareholders who have acquired shares to date. They may exercise their right to attend preferentially until April 15, when the rights will cease to be listed. The operation will end when the 192.6 million new titles start trading on the 27th of next month.

On April 15, the deadline to attend the operation preferentially ends

With this expansion, Cellnex will have raised a total of 14,700 million since March 2019 in three operations. The capital increase is essential for the group to finance its growth. It has a portfolio of projects that could reach 18,000 million, which will be executed in the following 18 months.