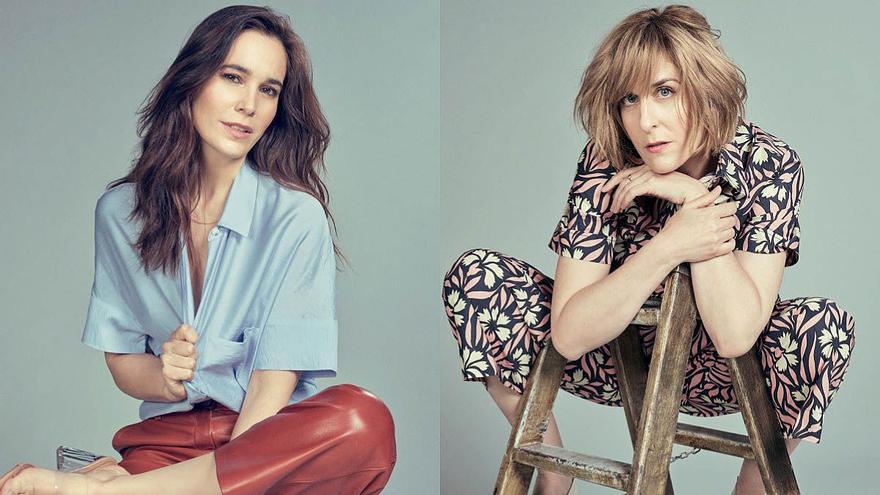 Celia freijeiro (Vigo, 1983) and Aixa Villagrán (Seville, 1978) have not only made pineapple with Leticia dolera placeholder image in the filming of the series ‘Perfect Life’, where they play Maria’s best friend and sister, but also in real life. To prepare the second season, now available in Movistar +They even went to retreat together, as their characters do in fiction.

Cris, Celia’s character, gets into a mess this year over the issue of her open relationship with her husband.

Celia Freijeiro: Well, I believe that he does something very brave and honest and, instead of hiding what has happened, he risks seeing the situation, raising it within his own mind. marriage and asks a sensitive question to his partner: what is happening here? He does it very timidly, with a bit of play, daring to suggest that his is not working. I think that, in the end, Cris’s journey has more to do with herself and with facing the void, what if she can’t rely on all the structures she had until then. They teach us to stay, but they do not teach us to leave.

Esther, on the other hand, what is proposed in this second season is to settle down, something that precisely goes against her free spirit.

Aixa Villagrán: Rather than settle down, he is looking for a different path, because the usual formula based on chaos and letting go is not working for him, as he is not meeting the expectations that are required of us to have a life ordered at 40. So he seeks to mature through relationship with an older woman. But the whole trip is spent with that dilemma, because he does not quite fit into that structured life that the environment is demanding of him.

Have you also felt that pressure to fit in that your characters suffer?

Celia Freijeiro: What I have felt is the self-demand and the idealization of things. The journey that I am hitting on a personal level is that, living in the here and now and being connected with what I feel and need, not with what they tell me I need. Listening to yourself like this is very valuable. In the series Leti also raises how fundamental it is to take care of our emotionality.

Aixa Villagrán: Besides, we are always required to be the women perfect. You have to have a job, a stable partner, children … I’m a bit fed up with the fact that every time you get out of that ideal pattern, you’re the weirdo or the bitter one, when you can be very happy with another non-standard type of life. This series has made me think a lot about what is right and what is wrong, about the extent to which we function in a way because the system is telling us to do it that way.

Celia Freijeiro: ‘Perfect Life’ is a series that questions the system and dogmas, and that makes you reflect.

The character of Cris introduces the theme of infidelity. Do we judge female characters more?

Celia Freijeiro: Here we vindicate our right to not do things well and to screw it up, to not meet expectations and to do things that, perhaps socially, are not correct. We have lacked female references and, as Leticia is a creator, she puts three women at the center of the story and in the end we realize that the same thing goes through us all. But since we have been told how we have to be, suddenly when you see a woman behaving like this, there is a substitute. For example, I had never been to a retreat and since Leticia wanted to do research on this topic for the SerieWe went to one and I found myself being prejudiced against something that I had never experienced.

And how was the retreat?

Celia Freijeiro: We did two. We went to three first, but it didn’t work out and we ran away. In the second, Leti and I went and I discovered a wonderful place in La Garrotxa (Catalonia), sharing experiences with 10 women who we did not know at all and with whom a very nice bond was created.

Aixa, you have an extensive scene of nude from the waist down. How did you experience it?

Aixa Villagrán: Did it seem long to you? I talked about that nude a lot with Leti. At first she wanted a complete one, but I told her that it seemed more interesting to me that it was from the waist down because it counted more than what happens when you get out of bed after having hooked up with someone. It seemed to me a powerful, different, risky nude, apart from the fact that I think that in this second season there is a certain apology for the pussy, we wanted to show it in a natural, non-sexualized way.

That is why there is also the scene of Leticia looking at her vulva.

Aixa Villagrán: Yes, it is a very intimate scene in which it is not sexualized at all and I appreciate it, because I do not like that it becomes something taboo. I’m sick of seeing censorship of nipples in Instagram and I find it very brave that in that series it is shown from a non-sexualized place. The nude scene was not long for me, I enjoyed it like a dwarf.

It will be the lack of habit to see these types of scenes.

Aixa Villagrán: Yes, we are not used to seeing it. Hopefully the nude is not just something sexual. When the script requires it like that, fine, but it can also be anecdotal and tell other things. In my particular scene there is not a nude, but the naturalness of waking up one day in bed with a stranger.

Aixa Villagrán: “The nude scene was not long for me. I enjoyed it like a dwarf”

Has ‘Perfect Life’ been much more than a series that will be added to your resume?

Celia Freijeiro: It has been a gift on a professional and personal level. Professional, because you find a creator with a high level of commitment, sensitivity and emotional intelligence, who is capable of putting three women at the center of the story, where a lot of questions and concerns are questioned that we also question ourselves, and when you get a script that challenges you in that way, it moves you and moves you. In addition, Leticia leaves us space to propose, to ask those questions that were hers, and suddenly it becomes something more than a job, something nourishing, you are nourishing yourself from that work and that work is nourished by your experience. And on a personal level, you meet a team that has a captain who proposes that trip to you and gets so wet that you have no choice but to accompany her. You feel that project as yours, very strong and special bonds are generated.

Aixa Villagrán: We are used to seeing a formula that is that women are portrayed from the male point of view and when a project comes to you in which the woman is the protagonist and tells of our concerns, our problems, fears, joys, it is inevitable to get involved in a different way. I get one hundred percent involved in each project, but in this one, not only because of friendship, I throw myself in the pool differently because it touches on issues that challenge me and it seems important to me that they become visible, not only from the feminine point of view, but also topics such as disability and the mental health.