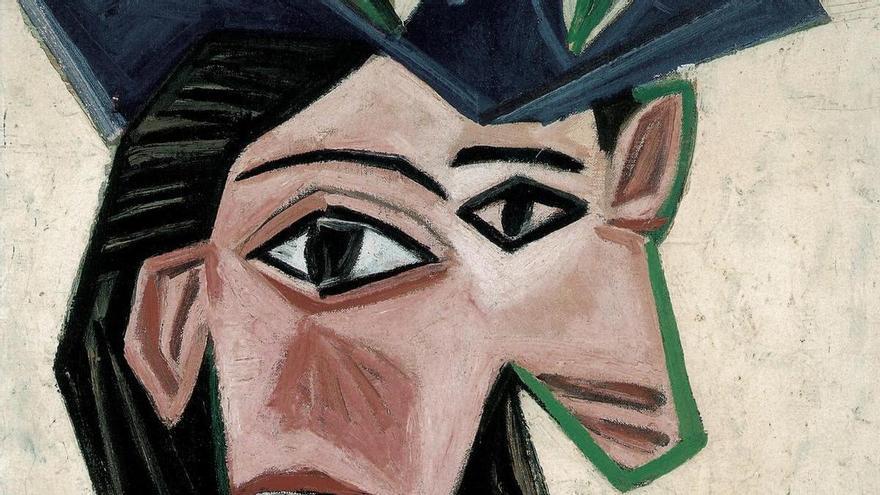 "What do we do with Pablo Picasso?". It is a question for which Estrella de Diego has no answer. The professor of art history at the Complutense University of Madrid, academic, patron of the Prado Museum and the Reina Sofía Museum and renowned feminist, carries a sea of ​​unresolved doubts that she believes are common to all art lovers. She acknowledges that she fascinates him as an artist and terrifies him as a person. "He's an extraordinary artist and then comes the other level, the abuser. How do we celebrate the 50th anniversary of his death next year? Good luck... It's not easy," he says, holding up his palms. It is a problem and a debate that the curators of the dozens of exhibitions that are being prepared should take on. In the programming of the 2023 fanfares that has been released, for the moment, there is not a trace of questioning. "It is not easy to find how to celebrate Picasso", insists Estrella de Diego, "accidental" curator of the exhibition Picasso. faces and figures, which opens on February 16 the San Fernando Academy of Fine Arts.

The extraordinary loans from the Beyeler Foundation (Basel, Switzerland) and the prints kept by the Academy make up a walk through classicist memories that the artist never abandoned, explains the curator. It was at the Academy where the Andalusian artist acquired this knowledge in the academic year he spent before leaving it due to illness. "It is difficult to give up imagining the ultimate influence that that time of learning came to have on the education of the Malaga native, who requested formal admission to the San Fernando School on October 14, 1897", recalls Tomás in the exhibition catalog Marco, director of the San Fernando Royal Academy of Fine Arts. The exhibition project starts from Francisco Calvo Serraller, who is succeeded by Estrella de Diego and Raphaël Bouvier after his death.

At the entrance, a line of introductory text on the wall places the visit in context. "And even simultaneous until 1930". The reference is to the relations that Picasso maintains in the thirties of the 20th century, the moment in which the exhibition is set. Those simultaneous relationships were with Olga Koklova, Marie-Thérèse Walter and Dora Maar. All of them represented as crying faces, all of them models and objects of his desire. The woman is the inexhaustible obsession of Picasso and in this journey through them it is evident. She collects them, devours them, mistreats them.

"Picasso confuses us. For me it is the great dilemma: how do we look at him. I have to separate the person from the artist and that is very difficult in his case and in this exhibition because the best Picasso is the portraitist and, in reality, there, in the portraits of women, is where the whole problem is. You can't forget what she paints. And if you want to look at her work, you have to forget her person. But I think I'm not alone there, it happens to many", explains Estrella de Diego in front of the most famous face of the route: Woman (1907), a vibrant oil painting that predates The Avignon ladiesthe painting that launched cubism.

Picasso, Estrella de Diego has written on occasion, was the last artist to resort to the idea of ​​the model (and muse) in full modernity. They are women who offer themselves and expose themselves, who remain silent and are willing. They are the engine of their greed. "I am not intimidated by Picasso, but this could not happen a century ago," says the art historian. A woman revising the myth of genius, questioning her humanity and the autonomy of her creativity. She asks herself again: "How can we look at Picasso today?" She anticipates a conflict that must be raised by the history of art. "We all have to give it a spin. It's a pending issue," she says.

She believes that this is a good time for art history to understand that feminism and the gender perspective are not at odds with science. diego star, as Mary Beard, does not find incompatibility or anachronism in the feminist position that looks at the history of art. And she says that a lot has changed because she checks it daily in her students. "In three years everything has changed a lot. My students were not so feminist, but there is a radical and recent change in the university. It is a paradigm shift and I do not notice resistance in the academic world. Perhaps because I was older before... I have not given up on being who I am and I have entered the Academy".

The exhibition at the Academy of Fine Arts of San Fernando does not pretend to be the revulsive of the new look that does justice to the myth. The aim is to show what Picasso learned at the Academy. "All of his works have the trace of classical sculpture", says Estrella de Diego in the warehouse of the casts of the sculptures, which Picasso himself contemplated and continually repeated until the end of his days. Although they are not presented as iconic pieces, the best moment of the tour is a diagonal formed by the marvelous sculpture Head of a woman (Dora) (1941), the prepared charcoal on canvas entitled Sculpture of a head (Marie-Thérèse) (1932) and the brilliant iron plate cut, folded and painted with an incised drawing, woman's head (1961). Estrella de Diego surrenders to this last piece, his favorite. She comments on his admiration and immediately collides again with doubts and questions: "Why do I like Picasso so much?"