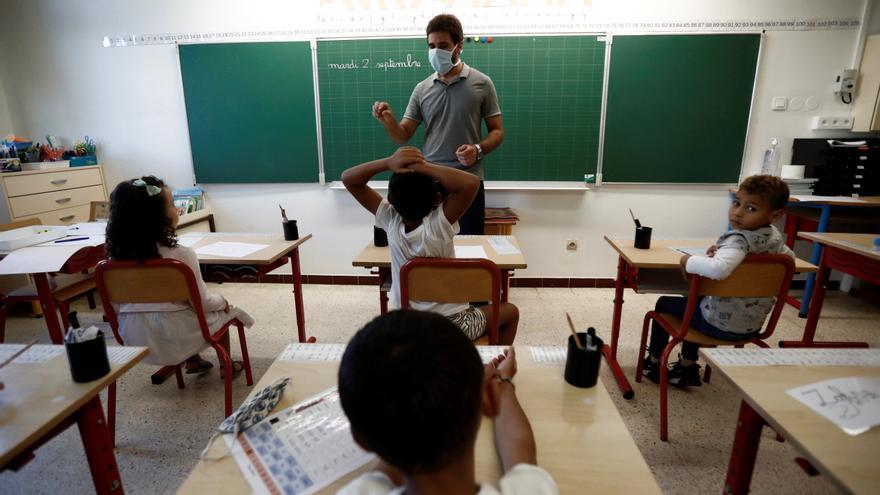 The teachers are worried. Concerned that the communities will not comply with the recommendations to lower the ratios to 20 students per classroom precisely because of that, recommendations, and they want it not to be voluntary. CCOO has demanded this Wednesday from the Ministry of Education that, in the event that an agreement is not reached in the Conference of Presidents next Friday, that it do so by law. “We urge the Government to guarantee by Decree Law a ratio of 20 students per classroom,” Unai Sordo, Secretary General of CCOO, explained at a press conference.

The union’s educational manager, Francisco García, explained that, despite the announcements of both, “at this moment in a reliable way, the only community that ensures this drop in ratios is the Valencian Community. In others, there are 23, but they are in process. ” Anticipating the objections that the Ministry sometimes raises when discussing these issues, García explained that there is a counterexample that makes this regulatory change feasible: when former Minister José Ignacio Wert changed the ratios to raise them by 10% in 2012.

To achieve these decreases in the ratios, Commissions are clear that there is only one way: to hire teachers. More than those committed, which are estimated at around 30,000 throughout Spain, and not even all of them are already hired.

In the end, in this matter even CCOO have folded to reality. In June they published, optimistic, a calculation according to which an investment of almost 5,100 million euros would be necessary to hire 165,000 teachers, among other measures, in order to lower the ratios to 15 students per class. Those were those times when the minister, Isabel Celaá, slipped that figure in an interview, although she never did much more to defend it: she did not go beyond a recommendation. The new accounts of the union are already resigned to the current scenarios, in which “most of the autonomies are considering a return to the ordinary ratios” (25 in Primary, 30 in Secondary, 35 in Baccalaureate).

CCOO maintains that to achieve ratios of 15 students in Nursery and 20 in the rest of the stages, 102,682 new teachers would be needed among all bodies and specialties, with an investment of 3,400 million euros. This would currently be the good scenario. The bad guy, 20 students per class at all stages, would require 70,746 teachers and 2,400 million. Neither is going to be fulfilled, in any case. According to the union’s calculations, the new hires do not add up to 30,000 professionals throughout the state.

In total, they explain from CCOO, at least 17,000 million euros would be necessary for the education system. On the one hand, 7,300 million to face the situation caused by the coronavirus (which are those 5,100 million to hire teachers plus another 2,200 for various elements such as digitization, educational compensation or to reform the centers) plus another 9,000 million that were lost in ordinary investment during the cuts of the previous crisis. At the moment there are 2,000 million committed by the central government.

In addition to these quantitative requests, CCOO also makes a series of more qualitative requirements. The document presented this Wednesday includes a score of proposals, among which some classics stand out (no less pressing for the union, which have not been addressed after years of demands only reinforce their need) such as the immediate replacement of teachers that cause low or provide teachers with the technological means and materials they need, in addition to the corresponding training to use them.