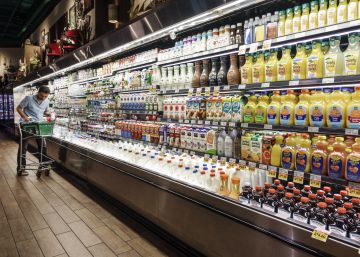 A macro-study with more than 100,000 participants in France has linked an extra consumption of 100 milliliters a day of sugary drinks, including fruit juices, with an 18% increase in the risk of suffering any type of tumor and an increase of 22% in the case of breast cancer. The investigation, published in the prestigious medical journal BMJ, has not found an association in the case of beverages with artificial sweeteners.

The new study is one more indication of the role of sugar-sweetened beverages in cancer, but it is not a definitive test, according to the authors themselves, led by the epidemiologist. Mathilde Touvier, of the National Institute of Health and Medical Research, in Paris. "This is an observational study, so you can not establish a cause and effect relationship," the scientists stress, not ruling out the existence of other confounding variables behind this apparent association.

"You can not establish a cause and effect relationship," the authors acknowledge

The investigation, baptized NutriNet-Santé, began in 2009 and is based on questionnaires answered on a website by people recruited through campaigns on the Internet, so "the results may not be generalizable to the total population," as the statistician has warned. Graham Wheeler, University College London, in the specialized portal Science Media Center. The more than 100,000 people included in the study, with an average of 42 years and 79% of women, answered questions about their consumption of 3,300 different types of drinks and foods at least twice until 2018.

Wheeler, oblivious to the new study, details the scope of the results. The daily intake of sugar-sweetened beverages from the participants was between 93 and 186 milliliters on average. During the follow-up period, five years on average, 22 people out of every 1,000 developed some type of tumor. "This means that, if 1,000 similar participants increased their daily consumption of sugary drinks by 100 milliliters, we would expect the number of cancer cases to increase from 22 to 26 per 1,000 people over a period of five years," explains the statistician. "And that would be assuming that there is an authentic cause-and-effect relationship between the intake of sugary drinks and the development of a cancer, something that still needs more research," says Wheeler.

The observed 18% increase in the risk of suffering from cancer may seem very high, but we must put the figure in context. It is about the relative risk, fruit of the comparison between a group of people and another group with a lower consumption of sugary drinks. But the absolute risk - the likelihood of suffering from this cancer in general - remains small.

"Obesity is recognized as a risk factor for many cancers," warn scientists

For example, a 35-year-old woman with no known risk factors has an absolute risk of breast cancer of 13.5% in a period of 90 years, according to the National Cancer Institute of the United States. This means that 1 in 7 women will suffer from breast cancer. If another group of women with less healthy habits presents an absolute risk of only two percentage points more, this would result in an increase in the relative risk of 15%.

An observational study is a type of analysis that can suggest a cause and effect relationship between two factors, but never demonstrate it. In a classic example, higher coffee consumption can be associated with an increased risk of cancer, but other confounding variables must be taken into account. The coffee may be accompanied by a cigar, which would be the true trigger of the observed tumor.

"There are many confounding factors that they say they have taken into account, but surely many others that have not had them," agrees the statistician. Miguel Ángel Martínez Beneito, of the Foundation for the Promotion of Health and Biomedical Research of the Valencian Community.

The link detected in the new study, with all the cautions, is nevertheless very plausible, according to the team of Mathilde Touvier. "Sugar-sweetened beverages are convincingly associated with the risk of obesity, which in turn is recognized as a risk factor for many cancers," the authors warn.

In 2015, scientists from Harvard University and Imperial College in London calculated that the consumption of sugary drinks causes 133,000 premature deaths per year for diabetes, another 45,000 for cardiovascular diseases and another 6,450 for different types of cancer.