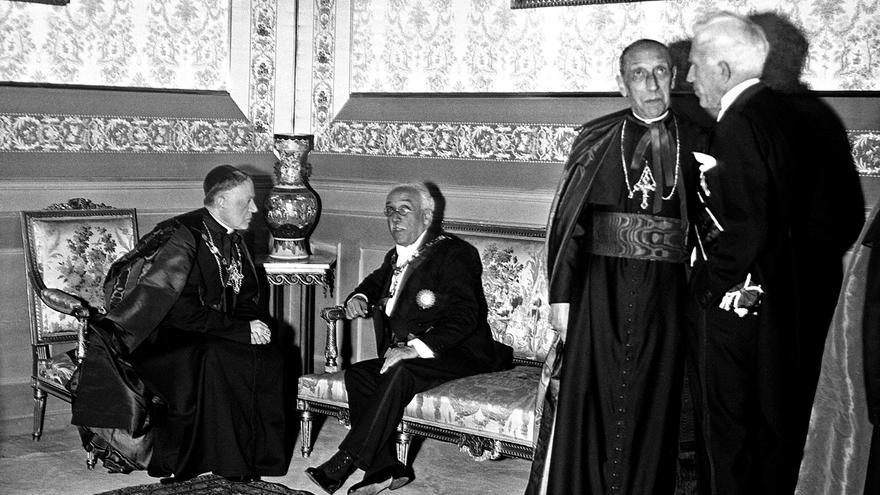 "The Republic is the 'de facto' form of government in our country. Consequently, our duty is to abide by it. (...) And we will not passively abide by it ... we will abide by it in a loyal, active way, doing everything we can to help it in its mission. ". With these words, the editorial of April 15, 1931, of El Debate greeted the new regime. The Catholic newspaper, founded by Ángel Herrera Oria, assumed the electoral result, with the consequent flight of Alfonso XIII.

And it is that, at least at the beginning, a good part of the Catholics welcomed with naturalness, even with hope, the arrival of the Second Republic, after years of corruption, 'dictatorships' and a brutal economic and social crisis. Later, controversial decisions came, such as the expulsion of the Jesuits, and riots that led to the first church burnings, the revolution in Asturias ... and the determined support of the Episcopate (and Rome) for the side that rebelled in the July coup. 1936. But it cannot be ignored - something conservative historians insist on doing - that the Church assumed the regime change normally and that many Catholics even joined in the hope that arose on April 14, 1931.

In fact, both the first president of the Republic, Niceto Alcalá-Zamora, and his Minister of the Interior, Miguel Maura, in charge of relations with the Catholic Church, were declared Catholics, of daily mass and communion. Two years earlier, Rome signed the Lateran Pacts with Mussolini, which ended with half a century of confinement of the Pope within the Vatican walls. The very conservative Pius XI tried to spread his influence among the extreme right that was beginning to roam freely throughout Europe, with special emphasis on Italy, Spain and Germany where Hitler was beginning to establish himself as a recognized leader.

The Vatican at that time had not gone through the Second Vatican Council - it would take three decades to do so - and it did not want to know anything about religious freedom in a Europe that was understood from the Catholic paradigm of the Council of Trent, the persecution of heretics and the total absence of interreligious dialogue. Perhaps that is why the most reactionary Spanish bishops climbed the walls when they found that the first measure of the republican government was to establish religious freedom throughout the Spanish state.

Azana had not yet pronounced his famous "Spain is no longer Catholic", but the Republic was betting on a secularism that wanted to give everyone freedom to profess their faith, whatever it was, or to not believe in any god.

On April 17, Maura instructed civil governors to refrain from attending religious events, which was a declaration of intent by a secular state. In the following weeks, the Government approved the dissolution of military orders, compulsory attendance at religious events in prisons, the end of tax exemptions to the Church, or the declaration of religious teaching as voluntary. Many of the themes are still very much alive 90 years later in contemporary Spain.

On the contrary, the Government assured the papal representative, the nuncio Federico Tedeschini (who remained in his post until June 1936, perhaps warned of what was coming just a month later), that until the Constitution was approved, the Constitution would be respected. Concordat, in force since 1851, in exchange for the Church showing signs of abiding by the new regime.

This was done. Rome complied with the Republic, and on April 24, 1931, the nuncio Tedeschini sent a telegram to all the bishops in which he transmitted to them the "wish of the Holy See" that they "recommend to the priests, religious and faithful of their dioceses that respect the constituted powers and obey them for the maintenance of order and for the common good ", as the priest and historian Vicente Cárcel Ortí recalls. Not everyone paid attention to him.

How did the Catholicism that welcomed the Second Republic breathe? Historians such as María Pilar Salomón Chéliz, from the University of Zaragoza, argue that at least "three representative positions of the heterogeneous Spanish Catholic universe could be differentiated."

A first, radically intransigent, which aspired to eliminate freedom of worship and return to the nation's Catholic confession. Deputies such as canons Ricardo Gómez Rojí and Antonio Pildáin or newspapers such as El Siglo Futuro defended these postulates, led from a fundamentalist sector of the episcopate by the primate of Toledo, Cardinal Segura, who campaigned against the Republic in April 1931, noting that it was "a work of the enemies of the Church" and calling it "divine punishment" after its promulgation. After successive attacks on the Republic and a harsh vindication of the fleeing monarchy, the Government and Rome agreed to leave Spain.

In a more possible reading, Catholic deputies such as Gil Robles were inserted, who valued freedom of conscience and Church-State separation - as long as there was a concordat with the Holy See - and bishops such as Cardinal Vidal i Barraquer, of Tarragona - one of the few who did not sign, in 1937, the collective letter of the Spanish bishops sanctifying Franco's 'Crusade', which he paid for with exile and ostracism—, and Cardinal Ilundáin, from Seville, who advocated collaboration with the new regime.

Finally, a minority group of Republican Catholics or Liberal Democrats, such as Ossorio y Gallardo or Niceto Alcalá-Zamora - head of the provisional Government and, later, President of the Republic until May 1936 - defended the freedom of religion and the non-denominational nature of the Condition.

The Catholic deputies were unable to prevent the disappearance of religious education, the suppression of the Society of Jesus and the riots that led to the burning of convents in May 1931. Later, the Constitution of the Republic would recognize freedom of worship and implement the Church-State separation as the basis of a broad secular program.

The Catholic minority in the Constituent Courts showed its rejection of republican secularism and, since the approval of the controversial article 26, made the revision of the Constitution one of the central axes of its political action. That day, the theologian Carlos García de Andoin points out, the religious question managed to "unite the anti-republicans and separate the republicans." The Catholics Alcalá-Zamora and Maura resigned from their positions and Azaña became, perhaps unwittingly, the head of the Republic's Government.

Despite everything, Tedeschini and Minister Fernando de los Ríos, the father of the Institución Libre de Enseñanza, maintained cordial relations and tried, almost to the end, for Spain and the Holy See to sign a 'minimum agreement' that would allow the coexistence of the majority religion in a purely secular state. There was even a 'Reserved Agreement' that had the approval of the then Vatican Secretary of State —and future Pius XII—, Eugenio Pacelli. Ultimately, the necessary consensus could not be reached.

In 1933, just the same day that the Law of Confessions and Religious Congregations was approved - which forced the institutions of the Church to register, established the closure of Catholic schools, nationalized part of the Church's assets and abolished the endowment of "cult and clergy" -, Pius XI published the controversial letter 'Dilectissima nobis', in which he condemned the "unjust" situation suffered by the Church and called on Catholics to organize.

The Asturias revolution of 1934 and the first murders of priests led to a total bankruptcy between the Church and the Government. The Catholic rights united around the CEDA and the republican side united in the Popular Front. The rest of the story was stained with blood. And, after Franco's victory, the Church regained its privileges as a reward for its work in the 'Holy Crusade'. but that's another story.