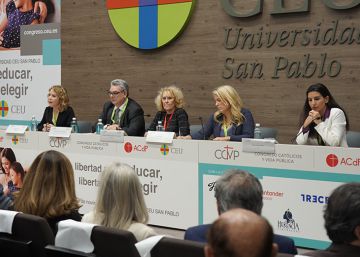 The Catholic Association of Propagandists (ACdP) and the CEU San Pablo Foundation closed last September the program of their Catholic and Public Life congress on the subject Freedom to educate, freedom to choose. But the final manifesto, after two days of debates, is a long response, in 1,365 words, what was said on Thursday by the Minister of Education, Isabel Celaá, in the inaugural address of the other Catholic congress held this weekend, that of the Catholic Schools. He argued that the Constitution does not endorse the free choice of school, and propagandists, a power in the sector through CEU, answer him with a battery of repairs. The most striking is the idea of ​​resuscitating the school check, a ghost that runs through the educational dispute since the centrist minister José Manuel Otero Novas raised it in 1980, in his short-lived law of Statutes of School Centers (LOECE).

The Catholic and Public Life Congress maintains: “The concert system is not perfect; It contributes to disfigure the character of many centers. Their limited time places them in permanent uncertainty. Think of financing formulas that put families at the center. The school check cannot be a closed debate. ” It was the president of Vox in Madrid, Rocío Monasterio, who had put the issue on the agenda, at a table of matches held on Friday. "The implementation of the so-called school check is the way to defend freedom and equal opportunities," he said.

The manifesto was read yesterday shortly after the celebration of the Eucharist by the Cardinal Archbishop of Madrid, Carlos Osoro. It was not casual. The text is a statement about how the Catholic school should be, concerted or not, and even the public school, carrying obligations to the State that the Constitution does not contemplate. First, it is a rosary of reproaches. "Interventionism, the lack of autonomy in the centers – in all centers, both in public ownership and in concerted ones – is a serious limit to the freedom of education."

It is, later, a confessional statement, which would leave non-Christian families out of the classrooms, which are legion, and which, however, according to the ACdP thesis, have the protection of the Constitution to have the right to study in those confessional centers. The manifesto says: “The Catholic school has a moral obligation to attend to what is also its specific mission: to communicate Christ. In order to do so, in the context of the family of the 21st century, the Catholic school must be configured in a key to evangelization. Parents have the original, primary and inalienable right to the education of their children and, therefore, the State and the centers are subsidiaries of the family. ”

The execrations against the State and the public school inspire other paragraphs of the manifesto, as if the Spaniards did not peacefully finance, with 6,000 million euros each year, the Catholic concerted schools. The manifesto says: “The opposite of freedom of education or education is the single public school, since it implies the imposition of a single model and, with it, the impossibility of choosing. The right to education does not imply, in any case, that the Administration should provide the entire educational service directly ”.

The education sector calls for a national pact that ends the cataract of laws that follow one another according to the Government (one of UCD, four of the PSOE, two of the PP…). No one is willing to give in, let alone bishops. The ACdP manifesto is its model. On these principles, the agreement is impossible, even less if the Vatican State disputes, which tied the issue in 1976 and 1978 with the Agreements negotiated by the propagandist Marcelino Oreja, more minister of the Holy See than of Spain on that issue. It was quite a Concordat; the term burned considering that the last signed ones were with Hitler, Mussolini and Franco.