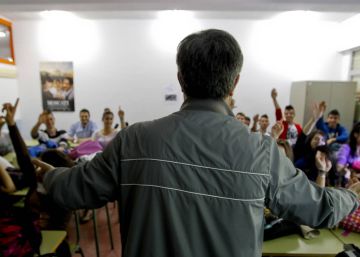 The Socialist Party and United We can have agreed that the subject of Religion - mostly of the Catholic faith but also with evangelical and Muslim teachers - stop counting to average grades and have an optional subject (mirror) for those students who do not opt ​​for it. This qualification usually raises the score that determines the access to the University and the scholarships. The decision has relieved the teachers and parents of Religion and pleased all those who bet because beliefs leave the classroom. With socialist governments Religion was an evaluable subject and with an alternative (Ethics), but it did not count in the average. But the Law for the Improvement of Educational Quality (LOMCE), approved by the PP without support in 2013, the system changed.

"We bet because Religion is mandatory offer and of free choice, with an alternative like Ethics. Because, otherwise, the freedom of families to choose is not exercised, "says Pedro Caballero, president of the National Catholic Confederation of Parents of Students and Parents (CONCAPA)." It is an attack on concerted and private education and there has been no talk with the educational community. "Caballero argues that if Religion or its alternative does not count in the average" loses its raison d'être, each subject must have its specific weight and must be equated. "

Jesús María Losada, president of the State Federation of Religious Education Teachers, speaks in a personal capacity because his group has not met, and it is very hard in his opinion: "My reaction is one of total indignation, they are taking us back, it is a lack of respect for our work, they only know how to take away value. If it is a subject in the academic system that is completely and, if they say they do not want it, they take it away altogether. We will fight. It is a betrayal. "

"We want religion to come out of the classroom altogether and this is a first step, so it seems perfect," says Leticia Cardenal, president of CEAPA, the confederation that groups the families of public education. "And while it does not come out, at least class of all religions is taught because our centers have a cultural diversity that is not seen in Religion class." Historically, Spanish Muslims and evangelicals reproach the State - which pays teachers although the Church designates them - that does not hire enough professors of their confessions despite having demanded.

Comisiones Obreras, the majority union of the education system, affirms in a statement that "in the face of the offensive of the extreme right against the right to education and freedom of education, supported by some regional governments, co-education and emotional education must be reinforced- This is achieved by promoting the secularism of the educational system and returning religions to the condition of an optional subject without academic effects or mandatory alternative. " In Aragon, Asturias, Valencian Community, Estremadura, Asturias and the Balearic Islands Religion class is in litigation in the courts for the cut of schedules after the entry into force of the LOMCE.

The Circle of Progressive Spirituality of Podemos and the Federal Socialist Christian Group of the PSOE discussed for months on the subject of Religion in the classroom and concluded in a manifesto: "Dwe say no to a subject of religion in a confessional framework, and yes to a new subject established in a non-denominational and cultural framework, with its own entity. " This means following the model of Norway, Sweden or United Reunion where it is obligatory and "non-denominational of the religious fact in general and of religions, together with a non-religious education aimed at recognizing and valuing the spiritual dimension, not patrimonializable exclusively by any religion".

Last April, 60 associations and political groups -We can, United Left, ERC, the Communist Party, Workers' Commissions, Lay Europe, the Student Union and Christian Networks associations - they agreed to demand that religion go out of schools. They criticized that the classes of "religious indoctrination" be financed with public funds, so they demanded their elimination from all schools, since the centers also receive state funds. The PSOE, in that case, did not rule.