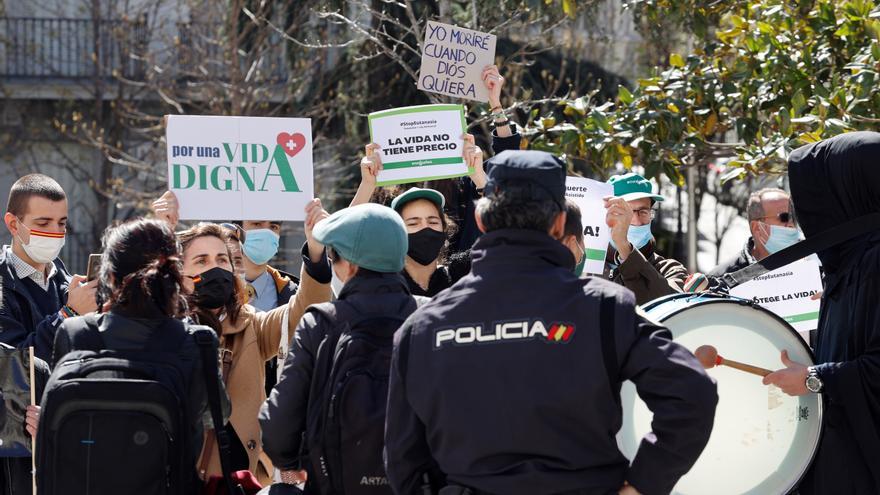 “Hastening death, whether by action or omission, seems to us irreparable damage that we are not willing to inflict on anyone.” Catholic institutions that are dedicated to the health field (Camilos, Confer, San Juan de Dios, Lares and Hospitales Católicos de Madrid) have signed a declaration this afternoon in which they raise – without quoting it – the conscientious objection before the entry into force, this Friday, of the Euthanasia Law.

At the end of a conference held at the San Camilo de Tres Cantos Center, the signatories affirm that “hasten death, either by action or omission of treatment and care due to any person at the end of their life or in a situation of serious disability It seems to us irreparable damage that we are not willing to inflict on anyone. ” At the same time, they maintain that “facilitating a suicidal action or a homicidal action, even if this action is requested and accepted by the interested party, is a mistake, because it represents a disregard for human dignity, since it suppresses the person at the hands of others. people”.

The text follows the usual postulates used to promote health conscientious objection, that is, the refusal of professionals to offer a certain service by virtue of their personal position: “Facilitate a suicidal action or a homicidal action, even if this action is requested and accepted by the interested party, it is a mistake, because it represents a disregard for human dignity, since it suppresses the person at the hands of other people “, add the signatories, who open the door to sedation aimed at ending suffering They consider that “palliative sedation, correctly indicated, when other measures are not effective, and administered with the consent of the patient, respects and humanizes the end-of-life process, mitigating intense and incoercible suffering.”

Along these lines, they assume that the possibility that there is an end of life decided by the interested party can make that person give up continuing to live based on care and add a shadow of doubt to the process: “We fear that the law of euthanasia discourages people who need care to live with dignity and meaning; that spurious interests generate demand for help or execution of euthanasia “, highlighted one of its signers, the religious Camilo José Carlos Bermejo. For his part, the director of the Ethics department in San Juan de Dios, José María Galán, denounced that “we perceive a growing social sensitivity to suffering at the end of life and we want to publicly express that we continue to commit ourselves to the palliation of pain and human suffering, offering the effective application of high quality Palliative Care that, at the same time, respects life without causing death “.

“Life is a good and a fundamental value on which the person is based, so its respect is essential to make a peaceful social coexistence possible. No one is morally entitled to suppress or cause the death of a fellow man,” he says the manifesto, which adds that “pain and death cannot be the ultimate criteria that measure human dignity, since this dignity is proper to each person, by the mere fact of being a” human being “and should not be subject to to subjective conditions attributed by the person himself or by his environment “.

Beyond the manifest, and as it advances ABCUltra-Catholic sectors, grouped around the self-proclaimed ‘Assembly for Life’, have called “a macro-demonstration, in October or November,” against the Euthanasia law. The platform, which brings together organizations such as the Catholic Association of Propagandists, Christians in Democracy, the Spanish Federation of Pro-Life Associations, e-Christians, the Spanish Family Forum, the Villacisneros Foundation or the European Federation One of Us (within the universe de HazteOir) has denounced that the Government “has stolen any social debate.” “After the pandemic, it is time for civil society to take back the street to show disagreement against the euthanasia law,” declared María San Gil, on behalf of the Villacisneros Foundation.