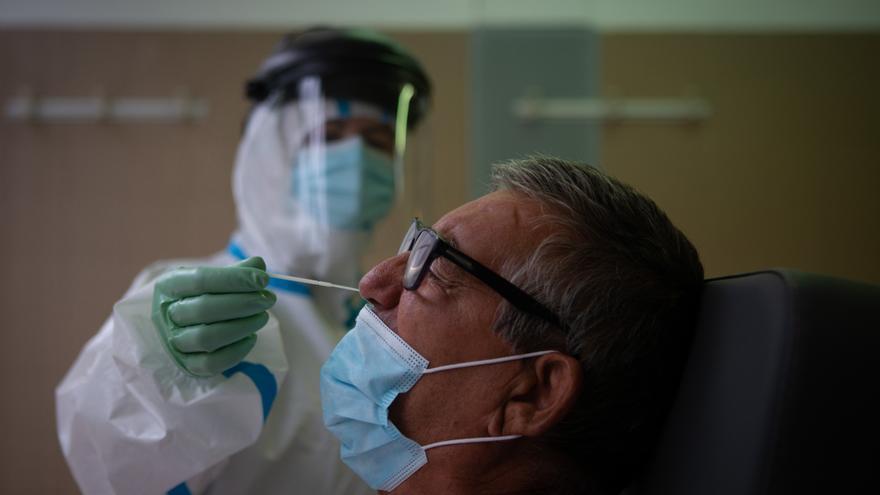 Registered cases of coronavirus continue to rise in Spain, which is already the EU country with the most infections. This Saturday, Catalonia has registered 1,275 new positives in the last 24 hours. This is a higher figure than yesterday, when 1,057 were confirmed, and raises the total number of diagnoses since the beginning of the pandemic in that community to 105,556, according to data from the Department of Health.

Regarding the deceased, he has added three in the last day. In this case, the figure is lower than the ten reported on Friday. In total, 12,815 people have died with coronavirus in the region; of these, 7,034 have done so in a hospital or social health center, 4,120 in geriatric residences, 814 at home and 847 have not been classified due to lack of information.

While infections rise, income falls: the data indicates that this Friday there were 544 patients in hospitals. They are 32 less than the previous day, although the number of people cared for in intensive care units has grown slightly, from 106 to 108.

Also, starting this Monday, The Department of Health of the Generalitat de Catalunya will also carry out massive tests for COVID-19 in Vilafranca del Penedès and Santa Coloma de Gramanet (Barcelona), thus adding to those that this week have been held in Sabadell, Ripollet and Terrassa. The tests will be carried out, even if there are no symptoms, to people from the Basic Health Area of ​​Vilafranca del Penedès aged 19 to 40 years who in recent days have had social contacts without respecting the distance, without a mask, who have been in closed spaces for a long time or in meetings of friends or agglomerations.

Galicia registers its first death with COVID-19 in two months

This Saturday Galicia has reported its first victim of COVID-19 since June 10. It was a 91-year-old woman with previous pathologies, who died on Friday at the University Hospital of Ourense, and which brings the total number of deaths in the region to 620. This death occurs in the midst of an upturn in infections in Galicia, which chains two weeks in which both new positives and active cases of coronavirus have increased. The latest report from the Servizo Galego de Saúde indicates that the number of active cases is 533, a figure similar to that in the community at the beginning of June.

In Asturias, fifteen new cases of coronavirus have been confirmed this Saturday, as reported by the Government in a statement. Of them, three are related to the outbreaks declared in Cangas del Narcea from the study trip to Malaga, which now has 16 infected, and that of a bar in Gijón, where there are already 27 positives.

On the other hand, the Cantabrian Ministry of Health has confirmed 50 new infections by COVID-19 in the last 36 hours, from 00:00 hours yesterday, Friday, until 12:00 hours today, Saturday. Two of these new cases have been detected in two different nursing homes, with which the number of positives reported in these centers stands at seven, located in three different locations. Two of these people are admitted and the rest are in isolation. In total, the number of active cases in the region is 300, of which 16 are hospitalized – none of them in the ICU – and 284 in home quarantine.

In Euskadi, The Basque Health Service (Osakidetza) has reported that 390 positive cases of COVID-19 have been detected in the last 24 hours, which is a slight drop from the peak of this Friday both in the total of positives (428), and in terms of the percentage of tests performed (6.8% for a total of 5,685 PCR performed). Despite the decline, the data is still very worrying, since the almost four hundred cases double the average of the last 14 days, when it was 200 diagnoses.

By territory, the vast majority of positives have been detected in Bizkaia, with 268 of the 390. In Álava there is an increase and marks 61 new infections, while in Gipuzkoa there are 57 infections. In this province, in the municipality of Lasarte-Oria, this Friday the ten nuns who live in the closed convent of Las Brígidas tested positive for coronavirus, although all of them remain asymptomatic, as confirmed by the mayor of the town.

The outbreak of the Burbáguena residence adds two deaths

In Aragon, Two more elderly women from the Burbáguena residence in Teruel have died in the hospital, where the total number of people infected with coronavirus has dropped by one. There are 64, of which 43 are residents and 21, workers of the center. Also in that community, the Superior Court of Justice of the region has agreed to suspend in a precautionary manner the order to close the bars at one in the morning. This limitation, however, is maintained in the regions of La Litera, Cinca Medio, Bajo Cinca, Bajo Aragón-Caspe, Central Region of Zaragoza, Monegros and the municipality of Huesca, which remain more affected by the outbreaks.

In Extremadura, Health has registered 47 new positive cases confirmed by PCR in the last day. Of these, 24 have occurred in the Badajo town of Villarta de los Montes, which is why Public Health has decreed this Saturday their immediate social isolation. Of its 437 inhabitants, 37 are infected and one in the hospital. In the whole community, 213 suspected cases have also been detected and, at the same time, 176 have been ruled out. There are eight hospitalized patients, of which two are in the ICU. They have not been registered.

For its part, in Murcia, the Government has confirmed 81 new positives in the last 24 hours, bringing the number of infected people to 991 in the Region. Since the beginning of the pandemic, there have been 4,634 infected confirmed by tests.

In Andalusia, active outbreaks amount to 102, after registering six new ones in the last hours, while the cases of infected COVID-19 confirmed by PCR have risen between yesterday and today by 344, according to data from the Ministry of Health. Of the total number of patients, 105 remain hospitalized, eleven more than yesterday, of which 16 are in the ICU, one more, and there have been three new deaths, two in Granada and one in Cádiz.

A Canarian pizzeria, among the best in Spain