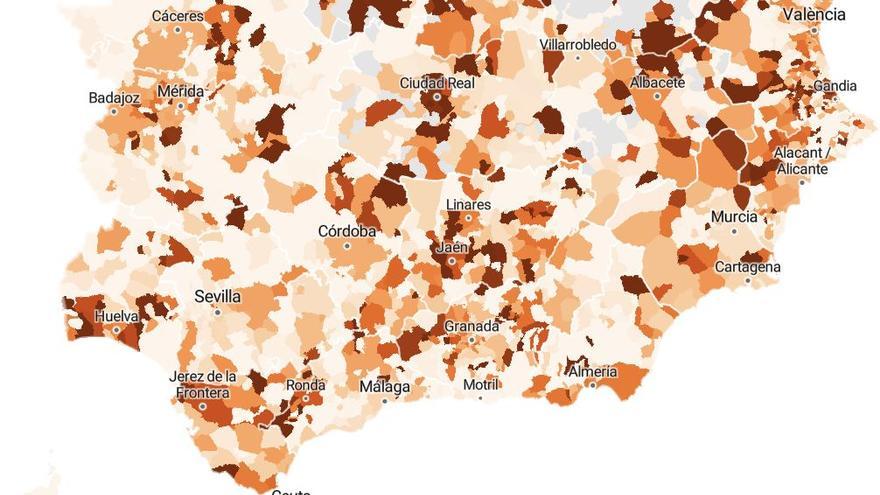 The second curve of the coronavirus in Spain plummets and the decline is already noticeable in the incidents of most municipalities in the peninsular territory. Not a single large Spanish city is above 1,000 cases per 100,000 inhabitants in the last 14 days and only two are above the threshold of 500, according to the analysis carried out by elDiario.es based on data from the ministries of Health of 17 autonomous communities and the cities of Ceuta and Melilla. However, still a small group of 400 towns and cities continue to register increases in infections despite the general fall in most of the territory.

According to the latest figures, barely a million and a half Spaniards reside in municipalities with an incidence of more than 500 cases per 100,000 inhabitants, double the rate that the Ministry of Health describes as “very high” risk. 350,000 people live in localities that exceed 800 cases of incidence. However, this figure has dropped a lot in the last week where in many municipalities the decrease in infections is already beginning to be felt: a week ago, there were 4 million people who lived in municipalities with incidents of more than 500.

The map that opens this information shows the data of total confirmed COVID-19 cases, in 14 days and the trend of infections in each municipality of the autonomous communities that have published their data on infections in each locality: practically the entire territory to With the exception of the smaller municipalities of Castilla y León, Castilla-La Mancha and Galicia, which do not break down the figures for the municipalities with fewer inhabitants.

It must be taken into account that the data of the communities are not always homogeneous among themselves due to the type of tests they include, the dates on which they update their figures or due to changes in the publication of the data in the same month. In addition, many communities did not publish data from December 8 but from December 9. More details on the methodology.

Balearics, according to this last minute information, at first refused to share his data, although in the end he has published it. Extremadura, under the same criteria, initially only published 8 most populated municipalities in the region. Now it publishes the figures even by local entities, villages and districts. Castilla y León is only publishing its figures for municipalities with more than 1,000 inhabitants and Castilla-La Mancha those with more than 500 inhabitants. They are not the only cases, practically half of the regions refused to publish their figures, arguing that they wanted to avoid the stigmatization of specific municipalities. Today, they all publish their data on Covid-19 cases by municipality.

To date, the municipalities of all the communities are included with the exception of those with less than 1,000 inhabitants in Castilla y León, those with less than 500 inhabitants in Castilla-La Mancha, and municipalities with few cases in Galicia. Some communities only include confirmed cases in recent weeks and do not publish their accumulated data since the start of the epidemic.

For practically all municipalities, the incidence of confirmed cases in 14 days is compared according to the latest available data with that registered two weeks ago. As December 8 was a holiday, some communities did not publish data by municipality on that day and in some communities the incidence figure has been compared with that of 15 days ago.

“In 2008, the response to the crisis was based on everyone for himself; in 2020, on community solidarity”

Begoña Villacís, the deputy mayor of Madrid who survives the shipwreck of Ciudadanos